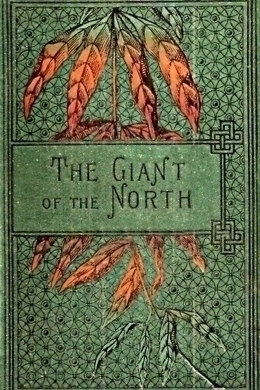 The Giant of the North

Pokings Round the Pole

This is the tale of a giant Eskimo, Screekinbroot, also called Chingatok. Journey with our young heroes into the frozen tundra and icy waters of the North Pole regions for encounters with Eskimo peoples and to learn about their life and what it is like when the “Kabiunets” comes to the Arctic. Captain Vane, his son Benjamin, and his two nephews Leo and Alf come in search of the North Pole. When their ship, The White Bear, gets stuck in the ice, the party of mariners face icy adventures and, in the end, “discover” the North Pole. (This was written before the Pole had been discovered.) There they find an old man whose ancestor was John MackIntosh, one of the sailors of Captain Henry Hudson, who had journeyed to the north pole, married, and had children, one of whom was this old man.

The Giant was an Eskimo of the Arctic regions. At the beginning of his career he was known among his kindred by the name of Skreekinbroot, or the howler, because he howled oftener and more furiously than any infant that had ever been born in Arctic land. His proper name, however, was Chingatok, though his familiars still ventured occasionally to style him Skreekinbroot.

Now it must not be supposed that our giant was one of those ridiculous myths of the nursery, with monstrous heads and savage hearts, who live on human flesh, and finally receive their deserts at the hands of famous giant-killing Jacks. No! Chingatok was a real man of moderate size– not more than seven feet two in his sealskin boots–with a lithe, handsome figure, immense chest and shoulders, a gentle disposition, and a fine, though flattish countenance, which was sometimes grave with thought, at other times rippling with fun.

We mention the howling characteristic of his babyhood because it was, in early life, the only indication of the grand spirit that dwelt within him–the solitary evidence of the tremendous energy with which he was endowed. At first he was no bigger than an ordinary infant. He was, perhaps, a little fatter, but not larger, and there was not an oily man or woman of the tribe to which he belonged who would have noticed anything peculiar about him if he had only kept moderately quiet; but this he would not or could not do. His mouth was his safety-valve. His spirit seemed to have been born big at once. It was far too large for his infant body, and could only find relief from the little plump dwelling in which it was at first enshrined by rushing out at the mouth. The shrieks of pigs were trifles to the yelling of that Eskimo child’s impatience. The caterwauling of cats was as nothing to the growls of his disgust. The angry voice of the Polar bear was a mere chirp compared with the furious howling of his disappointment, and the barking of a mad walrus was music to the roaring of his wrath.

Every one, except his mother, wished him dead and buried in the centre of an iceberg or at the bottom of the Polar Sea. His mother–squat, solid, pleasant-faced, and mild–alone put up with his ways with that long-suffering endurance which is characteristic of mothers. Nothing could disturb the serenity of Toolooha. When the young giant, (that was to be), roared, she fondled him; if that was ineffectual, she gave him a walrus tusk or a seal’s flipper to play with; if that did not suffice, she handed him a lump of blubber to suck; if that failed, as was sometimes the case, she gambolled with him on the floor of her snow-hut, and rubbed his oily visage lovingly over her not less oleaginous countenance. Need we enlarge on this point? Have not all mothers acted thus, or similarly, in all times and climes?

From pole to pole a mother’s soul Is tender, strong, and true; Whether the loved be good or bad– White, yellow, black, or blue.

But Toolooha’s love was wise as well as strong. If all else failed, she was wont to apply corporal punishment, and whacked her baby with her tail. Be not shocked, reader. We refer to the tail of her coat, which was so long that it trailed on the ground, and had a flap at the end which produced surprising results when properly applied.

But the howling condition of life did not last long.

At the age of five years little Chingatok began to grow unusually fast, and when he reached the age of seven, the tribe took note of him as a more than promising youth. Then the grand spirit, which had hitherto sought to vent itself in yells and murderous assaults on its doting mother, spent its energies in more noble action. All the little boys of his size, although much older than himself, began to look up to him as a champion. None went so boldly into mimic warfare with the walrus and the bear as Chingatok. No one could make toy sledges out of inferior and scanty materials so well as he. If any little one wanted a succourer in distress, Skreekinbroot was the lad to whom he, or she, turned. If a broken toy had to be mended, Chingatok could do it better than any other boy. And so it went on until he became a man and a giant.

When he was merely a big boy–that is, bigger than the largest man of his tribe–he went out with the other braves to hunt and fish, and signalised himself by the reckless manner in which he would attack the polar bear single-handed; but when he reached his full height and breadth he gave up reckless acts, restrained his tendency to display his great strength, and became unusually modest and thoughtful, even pensive, for an Eskimo.