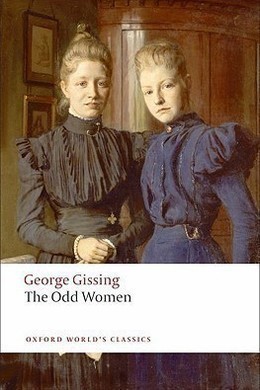 Virginia and Alice Madden are odd women’, growing old alone in Victorian England with no prospect of finding love. Forced into poverty by the sudden death of their father, they lead lives of quiet desperation in a genteel boarding house in London. The Odd Women is a novel of social realism that reflects the major sexual and cultural issues of the late nineteenth century. Unlike the “New Woman” novels of the era which challenged the idea that the unmarried woman was superfluous, Gissing satirizes that image and portrays women as odd and marginal in relation to an ideal. Set in a grimy, fog-ridden London, Gissing’s odd women range from the idealistic, financially self-sufficient Mary Barfoot to the Madden sisters who struggle to subsist in low paying jobs and little chance for joy. With narrative detachment, Gissing portrays contemporary society’s blatant ambivalence towards its own period of transition. Judged by contemporary critics to be as provocative as Zola and Ibsen, Gissing produced an intensely modern work as the issues it raises remain the subject of contemporary debate.

‘So to-morrow, Alice,’ said Dr. Madden, as he walked with his eldest daughter on the coast-downs by Clevedon, ‘I shall take steps for insuring my life for a thousand pounds.’

It was the outcome of a long and intimate conversation. Alice Madden, aged nineteen, a plain, shy, gentle-mannered girl, short of stature, and in movement something less than graceful, wore a pleased look as she glanced at her father’s face and then turned her eyes across the blue channel to the Welsh hills. She was flattered by the confidence reposed in her, for Dr. Madden, reticent by nature, had never been known to speak in the domestic circle about his pecuniary affairs. He seemed to be the kind of man who would inspire his children with affection: grave but benign, amiably diffident, with a hint of lurking mirthfulness about his eyes and lips. And to-day he was in the best of humours; professional prospects, as he had just explained to Alice, were more encouraging than hitherto; for twenty years he had practised medicine at Clevedon, but with such trifling emolument that the needs of his large family left him scarce a margin over expenditure; now, at the age of forty-nine–it was 1872–he looked forward with a larger hope. Might he not reasonably count on ten or fifteen more years of activity? Clevedon was growing in repute as a seaside resort; new houses were rising; assuredly his practice would continue to extend.

‘I don’t think girls ought to be troubled about this kind of thing,’ he added apologetically. ‘Let men grapple with the world; for, as the old hymn says, “‘tis their nature to.” I should grieve indeed if I thought my girls would ever have to distress themselves about money matters. But I find I have got into the habit, Alice, of talking to you very much as I should talk with your dear mother if she were with us.’

Mrs. Madden, having given birth to six daughters, had fulfilled her function in this wonderful world; for two years she had been resting in the old churchyard that looks upon the Severn sea. Father and daughter sighed as they recalled her memory. A sweet, calm, unpretending woman; admirable in the domesticities; in speech and thought distinguished by a native refinement, which in the most fastidious eyes would have established her claim to the title of lady. She had known but little repose, and secret anxieties told upon her countenance long before the final collapse of health.

‘And yet,’ pursued the doctor–doctor only by courtesy–when he had stooped to pluck and examine a flower, ‘I made a point of never discussing these matters with her. As no doubt you guess, life has been rather an uphill journey with us. But the home must be guarded against sordid cares to the last possible moment; nothing upsets me more than the sight of those poor homes where wife and children are obliged to talk from morning to night of how the sorry earnings shall be laid out. No, no; women, old or young, should never have to think about money.

The magnificent summer sunshine, and the western breeze that tasted of ocean, heightened his natural cheeriness. Dr. Madden fell into a familiar strain of prescience.

‘There will come a day, Alice, when neither man nor woman is troubled with such sordid care. Not yet awhile; no, no; but the day will come. Human beings are not destined to struggle for ever like beasts of prey. Give them time; let civilization grow. You know what our poet says: “There the common sense of most shall hold a fretful realm in awe–”’

He quoted the couplet with a subdued fervour which characterized the man and explained his worldly lot. Elkanah Madden should never have entered the medical profession; mere humanitarianism had prompted the choice in his dreamy youth; he became an empiric, nothing more. ‘Our poet,’ said the doctor; Clevedon was chiefly interesting to him for its literary associations. Tennyson he worshipped; he never passed Coleridge’s cottage without bowing in spirit. From the contact of coarse actualities his nature shrank.

When he and Alice returned from their walk it was the hour of family tea. A guest was present this afternoon; the eight persons who sat down to table were as many as the little parlour could comfortably contain. Of the sisters, next in age to Alice came Virginia, a pretty but delicate girl of seventeen. Gertrude, Martha, and Isabel, ranging from fourteen to ten, had no physical charm but that of youthfulness; Isabel surpassed her eldest sister in downright plainness of feature. The youngest, Monica, was a bonny little maiden only just five years old, dark and bright-eyed.