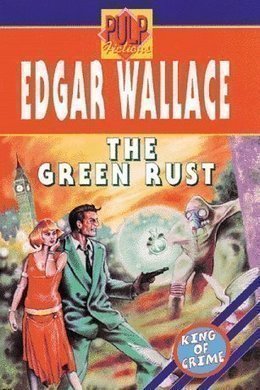 A brilliant but maniacal scientist is determined to unleash a virulent plague that threatens to drive humankind to the brink of extinction. The evil doctor matches wits with two top-notch detectives, one of whom happens to be a young woman. Fans of classic thrillers will relish every minute of The Green Rust.

“I don’t know whether there’s a law that stops my doing this, Jim; but if there is, you’ve got to get round it. You’re a lawyer and you know the game. You’re my pal and the best pal I’ve had, Jim, and you’ll do it for me.”

The dying man looked up into the old eyes that were watching him with such compassion and read their acquiescence.

No greater difference could be imagined than existed between the man on the bed and the slim neat figure who sat by his side. John Millinborn, broad-shouldered, big-featured, a veritable giant in frame and even in his last days suggesting the enormous strength which had been his in his prime, had been an outdoor man, a man of large voice and large capable hands; James Kitson had been a student from his youth up and had spent his manhood in musty offices, stuffy courts, surrounded by crackling briefs and calf-bound law-books.

Yet, between these two men, the millionaire ship-builder and the successful solicitor, utterly different in their tastes and their modes of life, was a friendship deep and true. Strange that death should take the strong and leave the weak; so thought James Kitson as he watched his friend.

“I’ll do what can be done, John. You leave a great responsibility upon the girl–a million and a half of money.”

“I get rid of a greater one, Jim. When my father died he left a hundred thousand between us, my sister and I. I’ve turned my share into a million, but that is by the way. Because she was a fairly rich girl and a wilful girl, Jim, she broke her heart. Because they knew she had the money the worst men were attracted to her–and she chose the worst of the worst!”

He stopped speaking to get his breath.

“She married a plausible villain who ruined her–spent every sou and left her with a mountain of debt and a month-old baby. Poor Grace died and he married again. I tried to get the baby, but he held it as a hostage. I could never trace the child after it was two years old. It was only a month ago I learnt the reason. The man was an international swindler and was wanted by the police. He was arrested in Paris and charged in his true name–the name he had married in was false. When he came out of prison he took his own name–and of course the child’s name changed, too.”

“Get the will proved and begin your search for Oliva Prédeaux. There is no such person. The girl’s name you know, and I have told you where she is living. You’ll find nobody who knows Oliva Prédeaux–her father disappeared when she was six–he’s probably dead, and her stepmother brought her up without knowing her relationship to me–then she died and the girl has been working ever since she was fifteen.”

“Until she is married. Watch her, Jim, spend all the money you wish–don’t influence her unless you see she is getting the wrong kind of man….”

His voice, which had grown to something of the old strength, suddenly dropped and the great head rolled sideways on the pillow.

Kitson rose and crossed to the door. It opened upon a spacious sitting-room, through the big open windows of which could be seen the broad acres of the Sussex Weald.

A man was sitting in the window-seat, chin in hand, looking across to the chequered fields on the slope of the downs. He was a man of thirty, with a pointed beard, and he rose as the lawyer stepped quickly into the room.

“Anything wrong?” he asked.

“I think he has fainted–will you go to him, doctor?”

The young man passed swiftly and noiselessly to the bedside and made a brief examination. From a shelf near the head of the bed he took a hypodermic syringe and filled it from a small bottle. Baring the patient’s side he slowly injected the drug. He stood for a moment looking down at the unconscious man, then came back to the big hall where James Kitson was waiting.

The doctor shook his head.

“It is difficult to form a judgment,” he said quietly, “his heart is all gone to pieces. Has he a family doctor?”

“Not so far as I know–he hated doctors, and has never been ill in his life. I wonder he tolerated you.”

“He couldn’t help himself. He was taken ill in the train on the way to this place and I happened to be a fellow-passenger. He asked me to bring him here and I have been here ever since. It is strange,” he added, “that so rich a man as Mr. Millinborn had no servant travelling with him and should live practically alone in this–well, it is little better than a cottage.”

Despite his anxiety, James Kitson smiled.

“He is the type of man who hates ostentation. I doubt if he has ever spent a thousand a year on himself all his life–do you think it is wise to leave him?”

The doctor spread out his hands.

“I can do nothing. He refused to allow me to send for a specialist and I think he was right. Nothing can be done for him. Still—-“