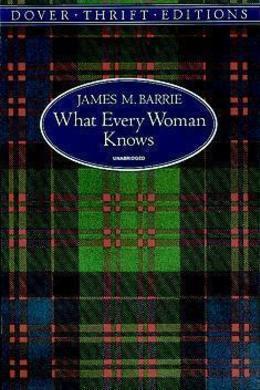 What Every Woman Knows

Married by special agreement to John Shand, Maggie Wylie proves to be a highly effective voice for her politician husband. One of the author’s most realistic and important theatrical works — graced with flashes of sly humor and dramatic irony — entertainingly develops the theme that behind every successful man is a woman.

James Wylie is about to make a move on the dambrod, and in the little Scotch room there is an awful silence befitting the occasion. James with his hand poised–for if he touches a piece he has to play it, Alick will see to that–raises his red head suddenly to read Alick’s face. His father, who is Alick, is pretending to be in a panic lest James should make this move. James grins heartlessly, and his fingers are about to close on the ‘man’ when some instinct of self-preservation makes him peep once more. This time Alick is caught: the unholy ecstasy on his face tells as plain as porridge that he has been luring James to destruction. James glares; and, too late, his opponent is a simple old father again. James mops his head, sprawls in the manner most conducive to thought in the Wylie family, and, protruding his underlip, settles down to a reconsideration of the board. Alick blows out his cheeks, and a drop of water settles on the point of his nose.

You will find them thus any Saturday night (after family worship, which sends the servant to bed); and sometimes the pauses are so long that in the end they forget whose move it is.

It is not the room you would be shown into if you were calling socially on Miss Wylie. The drawing-room for you, and Miss Wylie in a coloured merino to receive you; very likely she would exclaim, “This is a pleasant surprise!” though she has seen you coming up the avenue and has just had time to whip the dustcloths off the chairs, and to warn Alick, David and James, that they had better not dare come in to see you before they have put on a dickey. Nor is this the room in which you would dine in solemn grandeur if invited to drop in and take pot-luck, which is how the Wylies invite, it being a family weakness to pretend that they sit down in the dining-room daily. It is the real living-room of the house, where Alick, who will never get used to fashionable ways, can take off his collar and sit happily in his stocking soles, and James at times would do so also; but catch Maggie letting him.

There is one very fine chair, but, heavens, not for sitting on; just to give the room a social standing in an emergency. It sneers at the other chairs with an air of insolent superiority, like a haughty bride who has married into the house for money. Otherwise the furniture is homely; most of it has come from that smaller house where the Wylies began. There is the large and shiny chair which can be turned into a bed if you look the other way for a moment. James cannot sit on this chair without gradually sliding down it till he is lying luxuriously on the small of his back, his legs indicating, like the hands of a clock, that it is ten past twelve; a position in which Maggie shudders to see him receiving company.

The other chairs are horse-hair, than which nothing is more comfortable if there be a good slit down the seat. The seats are heavily dented, because all the Wylie family sit down with a dump. The draught-board is on the edge of a large centre table, which also displays four books placed at equal distances from each other, one of them a Bible, and another the family album. If these were the only books they would not justify Maggie in calling this chamber the library, her dogged name for it; while David and James call it the west-room and Alick calls it ‘the room,’ which is to him the natural name for any apartment without a bed in it. There is a bookcase of pitch pine, which contains six hundred books, with glass doors to prevent your getting at them.

No one does try to get at the books, for the Wylies are not a reading family. They like you to gasp when you see so much literature gathered together in one prison-house, but they gasp themselves at the thought that there are persons, chiefly clergymen, who, having finished one book, coolly begin another. Nevertheless it was not all vainglory that made David buy this library: it was rather a mighty respect for education, as something that he has missed. This same feeling makes him take in the Contemporary Review and stand up to it like a man. Alick, who also has a respect for education, tries to read the Contemporary, but becomes dispirited, and may be heard muttering over its pages, ‘No, no use, no use, no,’ and sometimes even ‘Oh hell.’ James has no respect for education; and Maggie is at present of an open mind.