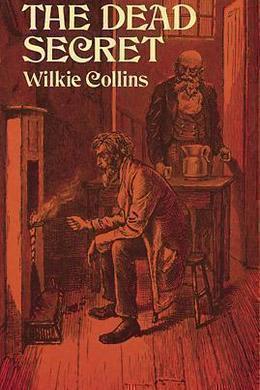 The Dead Secret begins with the death bed confession of Mrs Treverton that will take her family by storm. The maid, Sarah Leeson, against the dying wish of Mrs Treverton, hides the letter, and thus the disaster is delayed but not averted. Rosamond, her daughter, who is married to a blind man, gives birth prematurely and is doomed to be the worst hit by the dying confession, which details buried secrets and the relationship of a fallen woman with her illegitimate daughter.

“Will she last out the night, I wonder?”

“Look at the clock, Mathew.”

“Ten minutes past twelve! She HAS lasted the night out. She has lived, Robert, to see ten minutes of the new day.”

These words were spoken in the kitchen of a large country-house situated on the west coast of Cornwall. The speakers were two of the men-servants composing the establishment of Captain Treverton, an officer in the navy, and the eldest male representative of an old Cornish family. Both the servants communicated with each other restrainedly, in whispers–sitting close together, and looking round expectantly toward the door whenever the talk flagged between them.

“It’s an awful thing,” said the elder of the men, “for us two to be alone here, at this dark time, counting out the minutes that our mistress has left to live!”

“Robert,” said the other, “you have been in the service here since you were a boy–did you ever hear that our mistress was a play-actress when our master married her?”

“How came you to know that?” inquired the elder servant, sharply.

“Hush!” cried the other, rising quickly from his chair.

A bell rang in the passage outside.

“Is that for one of us?” asked Mathew.

“Can’t you tell, by the sound, which is which of those bells yet?” exclaimed Robert, contemptuously. “That bell is for Sarah Leeson. Go out into the passage and look.”

The younger servant took a candle and obeyed. When he opened the kitchen-door, a long row of bells met his eye on the wall opposite. Above each of them was painted, in neat black letters, the distinguishing title of the servant whom it was specially intended to summon. The row of letters began with Housekeeper and Butler, and ended with Kitchen-maid and Footman’s Boy.

Looking along the bells, Mathew easily discovered that one of them was still in motion. Above it were the words Lady’s-Maid. Observing this, he passed quickly along the passage, and knocked at an old-fashioned oak door at the end of it. No answer being given, he opened the door and looked into the room. It was dark and empty.

“Sarah is not in the housekeeper’s room,” said Mathew, returning to his fellow-servant in the kitchen.

“She is gone to her own room, then,” rejoined the other. “Go up and tell her that she is wanted by her mistress.”

The bell rang again as Mathew went out.

“Quick!–quick!” cried Robert. “Tell her she is wanted directly. Wanted,” he continued to himself in lower tones, “perhaps for the last time!”

Mathew ascended three flights of stairs–passed half-way down a long arched gallery–and knocked at another old-fashioned oak door. This time the signal was answered. A low, clear, sweet voice, inside the room, inquired who was waiting without? In a few hasty words Mathew told his errand. Before he had done speaking the door was quietly and quickly opened, and Sarah Leeson confronted him on the threshold, with her candle in her hand.

Not tall, not handsome, not in her first youth–shy and irresolute in manner–simple in dress to the utmost limits of plainness–the lady’s-maid, in spite of all these disadvantages, was a woman whom it was impossible to look at without a feeling of curiosity, if not of interest. Few men, at first sight of her, could have resisted the desire to find out who she was; few would have been satisfied with receiving for answer, She is Mrs. Treverton’s maid; few would have refrained from the attempt to extract some secret information for themselves from her face and manner; and none, not even the most patient and practiced of observers, could have succeeded in discovering more than that she must have passed through the ordeal of some great suffering at some former period of her life. Much in her manner, and more in her face, said plainly and sadly: I am the wreck of something that you might once have liked to see; a wreck that can never be repaired–that must drift on through life unnoticed, unguided, unpitied–drift till the fatal shore is touched, and the waves of Time have swallowed up these broken relics of me forever. This was the story that was told in Sarah Leeson’s face–this, and no more.

No two men interpreting that story for themselves, would probably have agreed on the nature of the suffering which this woman had undergone. It was hard to say, at the outset, whether the past pain that had set its ineffaceable mark on her had been pain of the body or pain of the mind. But whatever the nature of the affliction she had suffered, the traces it had left were deeply and strikingly visible in every part of her face.