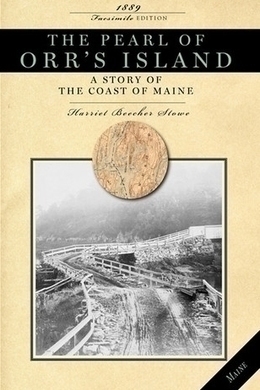 The Pearl of Orr's Island

A Story of the Coast of Maine

The rural tranquillity of the lonely, pine-girthed shores of the Maine coast is the setting for this beautiful novel of conflicting aspirations written by one of the most prolific and influential writers in American history. Here is the heartwarming story of a young girl’s struggle to belong and fit in, in the face of adversity, and of her upbringing among strong women, grumpy fishermen, annoying gossips, sea captains, and the dreamlike, temptestuous landscape of Orr’s Island. The Pearl of Orr’s Island is one of the forgotten – but not lost – masterpieces of American literature. It reflects Harriet Beecher Stowe’s awareness of the complexity of small-town society, her commitment to realism, and her fluency in the local language.

On the road to the Kennebec, below the town of Bath, in the State of Maine, might have been seen, on a certain autumnal afternoon, a one-horse wagon, in which two persons were sitting. One was an old man, with the peculiarly hard but expressive physiognomy which characterizes the seafaring population of the New England shores. A clear blue eye, evidently practiced in habits of keen observation, white hair, bronzed, weather-beaten cheeks, and a face deeply lined with the furrows of shrewd thought and anxious care, were points of the portrait that made themselves felt at a glance.

By his side sat a young woman of two-and-twenty, of a marked and peculiar personal appearance. Her hair was black, and smoothly parted on a broad forehead, to which a pair of penciled dark eyebrows gave a striking and definite outline. Beneath, lay a pair of large black eyes, remarkable for tremulous expression of melancholy and timidity. The cheek was white and bloodless as a snowberry, though with the clear and perfect oval of good health; the mouth was delicately formed, with a certain sad quiet in its lines, which indicated a habitually repressed and sensitive nature.

The dress of this young person, as often happens in New England, was, in refinement and even elegance, a marked contrast to that of her male companion and to the humble vehicle in which she rode. There was not only the most fastidious neatness, but a delicacy in the choice of colors, an indication of elegant tastes in the whole arrangement, and the quietest suggestion in the world of an acquaintance with the usages of fashion, which struck one oddly in those wild and dreary surroundings. On the whole, she impressed one like those fragile wild-flowers which in April cast their fluttering shadows from the mossy crevices of the old New England granite,–an existence in which colorless delicacy is united to a sort of elastic hardihood of life, fit for the rocky soil and harsh winds it is born to encounter.

The scenery of the road along which the two were riding was wild and bare. Only savins and mulleins, with their dark pyramids or white spires of velvet leaves, diversified the sandy wayside; but out at sea was a wide sweep of blue, reaching far to the open ocean, which lay rolling, tossing, and breaking into white caps of foam in the bright sunshine. For two or three days a northeast storm had been raging, and the sea was in all the commotion which such a general upturning creates.

The two travelers reached a point of elevated land, where they paused a moment, and the man drew up the jogging, stiff-jointed old farm-horse, and raised himself upon his feet to look out at the prospect.

There might be seen in the distance the blue Kennebec sweeping out toward the ocean through its picturesque rocky shores, docked with cedars and other dusky evergreens, which were illuminated by the orange and flame-colored trees of Indian summer. Here and there scarlet creepers swung long trailing garlands over the faces of the dark rock, and fringes of goldenrod above swayed with the brisk blowing wind that was driving the blue waters seaward, in face of the up-coming ocean tide,–a conflict which caused them to rise in great foam-crested waves. There are two channels into this river from the open sea, navigable for ships which are coming in to the city of Bath; one is broad and shallow, the other narrow and deep, and these are divided by a steep ledge of rocks.

Where the spectators of this scene were sitting, they could see in the distance a ship borne with tremendous force by the rising tide into the mouth of the river, and encountering a northwest wind which had succeeded the gale, as northwest winds often do on this coast. The ship, from what might be observed in the distance, seemed struggling to make the wider channel, but was constantly driven off by the baffling force of the wind.

“There she is, Naomi,” said the old fisherman, eagerly, to his companion, “coming right in.” The young woman was one of the sort that never start, and never exclaim, but with all deeper emotions grow still. The color slowly mounted into her cheek, her lips parted, and her eyes dilated with a wide, bright expression; her breathing came in thick gasps, but she said nothing.

The old fisherman stood up in the wagon, his coarse, butternut-colored coat-flaps fluttering and snapping in the breeze, while his interest seemed to be so intense in the efforts of the ship that he made involuntary and eager movements as if to direct her course. A moment passed, and his keen, practiced eye discovered a change in her movements, for he cried out involuntarily,–