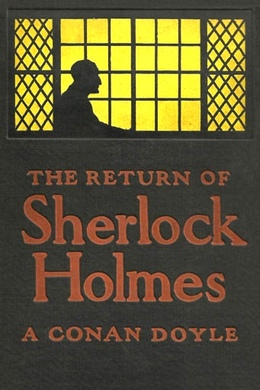 The Return of Sherlock Holmes

When Sherlock Holmes met his demise in The Adventure of the Final Problem, published in 1893, the distress of the unsuspecting reading public was profound. For years fans showed no signs of letting Sherlock Homes lie down and die. Eventually, Doyle saw fit to continue his Holmes’ canon and wrote a series of 13 short stories The Return of Sherlock Holmes published in 1905. The series begins, inevitably, with the shock re-appearance of the master detective in The Adventure of the Empty House.

It was in the spring of the year 1894 that all London was interested, and the fashionable world dismayed, by the murder of the Honourable Ronald Adair under most unusual and inexplicable circumstances. The public has already learned those particulars of the crime which came out in the police investigation, but a good deal was suppressed upon that occasion, since the case for the prosecution was so overwhelmingly strong that it was not necessary to bring forward all the facts. Only now, at the end of nearly ten years, am I allowed to supply those missing links which make up the whole of that remarkable chain. The crime was of interest in itself, but that interest was as nothing to me compared to the inconceivable sequel, which afforded me the greatest shock and surprise of any event in my adventurous life. Even now, after this long interval, I find myself thrilling as I think of it, and feeling once more that sudden flood of joy, amazement, and incredulity which utterly submerged my mind. Let me say to that public, which has shown some interest in those glimpses which I have occasionally given them of the thoughts and actions of a very remarkable man, that they are not to blame me if I have not shared my knowledge with them, for I should have considered it my first duty to do so, had I not been barred by a positive prohibition from his own lips, which was only withdrawn upon the third of last month.

It can be imagined that my close intimacy with Sherlock Holmes had interested me deeply in crime, and that after his disappearance I never failed to read with care the various problems which came before the public. And I even attempted, more than once, for my own private satisfaction, to employ his methods in their solution, though with indifferent success. There was none, however, which appealed to me like this tragedy of Ronald Adair. As I read the evidence at the inquest, which led up to a verdict of willful murder against some person or persons unknown, I realized more clearly than I had ever done the loss which the community had sustained by the death of Sherlock Holmes. There were points about this strange business which would, I was sure, have specially appealed to him, and the efforts of the police would have been supplemented, or more probably anticipated, by the trained observation and the alert mind of the first criminal agent in Europe. All day, as I drove upon my round, I turned over the case in my mind and found no explanation which appeared to me to be adequate. At the risk of telling a twice-told tale, I will recapitulate the facts as they were known to the public at the conclusion of the inquest.

The Honourable Ronald Adair was the second son of the Earl of Maynooth, at that time governor of one of the Australian colonies. Adair’s mother had returned from Australia to undergo the operation for cataract, and she, her son Ronald, and her daughter Hilda were living together at 427 Park Lane. The youth moved in the best society–had, so far as was known, no enemies and no particular vices. He had been engaged to Miss Edith Woodley, of Carstairs, but the engagement had been broken off by mutual consent some months before, and there was no sign that it had left any very profound feeling behind it. For the rest {sic} the man’s life moved in a narrow and conventional circle, for his habits were quiet and his nature unemotional. Yet it was upon this easy-going young aristocrat that death came, in most strange and unexpected form, between the hours of ten and eleven-twenty on the night of March 30, 1894.

Ronald Adair was fond of cards–playing continually, but never for such stakes as would hurt him. He was a member of the Baldwin, the Cavendish, and the Bagatelle card clubs. It was shown that, after dinner on the day of his death, he had played a rubber of whist at the latter club. He had also played there in the afternoon. The evidence of those who had played with him–Mr. Murray, Sir John Hardy, and Colonel Moran–showed that the game was whist, and that there was a fairly equal fall of the cards. Adair might have lost five pounds, but not more. His fortune was a considerable one, and such a loss could not in any way affect him. He had played nearly every day at one club or other, but he was a cautious player, and usually rose a winner. It came out in evidence that, in partnership with Colonel Moran, he had actually won as much as four hundred and twenty pounds in a sitting, some weeks before, from Godfrey Milner and Lord Balmoral. So much for his recent history as it came out at the inquest.