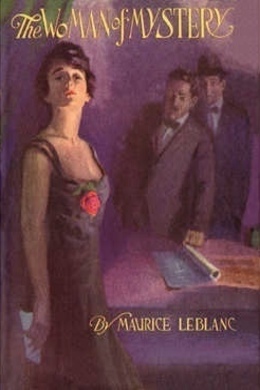 The Woman of Mystery

Paul and Elisabeth Delroze, while newlyweds, arrive at Ornequin Castle, which is located above the small town of Lorraine Corvigny, a few kilometers from the German border. The castle is owned by the Earl of Andeville, father of Elizabeth, and has been closed since the death of his wife the Comtesse Hermine. By visiting the castle, Paul will make a terrible discovery that will change his life forever. Contents: The Murder; The Locked Room; The Call To Arms; A Letter From Élisabeth; The Peasant-woman At Corvigny; What Paul Saw At Ornequin; H. E. R. M.; Élisabeth’s Diary; A Sprig Of Empire; 75 Or 155?; “Ysery, Misery”; Major Hermann; The Ferryman’s House; A Masterpiece Of Kultur; Prince Conrad Makes Merry; The Impossible Struggle; The Law Of The Conqueror; Hill 132; Hohenzollern; The Death Penalty–and a Capital Punishment.

“Suppose I were to tell you,” said Paul Delroze, “that I once stood face to face with him on French. . . .”

Élisabeth looked up at him with the fond expression of a bride to whom the least word of the man she loves is a subject of wonder:

“You have seen William II. in France?”

“Saw him with my own eyes; and I have never forgotten a single one of the details that marked the meeting. And yet it happened very long ago.”

He was speaking with a sudden seriousness, as though the revival of that memory had awakened the most painful thoughts in his mind.

“Tell me about it, won’t you, Paul?” asked Élisabeth.

“Yes, I will,” he said. “In any case, though I was only a child at the time, the incident played so tragic a part in my life that I am bound to tell you the whole story.”

The train stopped and they got out at Corvigny, the last station on the local branch line which, starting from the chief town in the department, runs through the Liseron Valley and ends, fifteen miles from the frontier, at the foot of the little Lorraine city which Vauban, as he tells us in his “Memoirs,” surrounded “with the most perfect demilunes imaginable.”

The railway-station presented an appearance of unusual animation. There were numbers of soldiers, including many officers. A crowd of passengers–tradespeople, peasants, workmen and visitors to the neighboring health-resorts served by Corvigny–stood amid piles of luggage on the platform, awaiting the departure of the next train for the junction.

It was the last Thursday in July, the Thursday before the mobilization of the French army.

Élisabeth pressed up against her husband:

“Oh, Paul,” she said, shivering with anxiety, “if only we don’t have war!”

“But look at all these people leaving, all these families running away from the frontier!”

He squeezed her hand:

“Don’t be afraid, Élisabeth. Nothing of the kind will happen. There can’t be war unless somebody declares it. And who would be fool enough, criminal enough, to do anything so abominable?”

“I am not afraid,” she said, “and I am sure that I should be very brave if you had to go. Only . . . only it would be worse for us than for anybody else. Just think, darling: we were only married this morning!”

At this reference to their wedding of a few hours ago, containing so great a promise of deep and lasting joy, her charming face lit up, under its halo of golden curls, with a smile of utter trustfulness; and she whispered:

“Married this morning, Paul! . . . So you can understand that my load of happiness is not yet very heavy.”

There was a movement among the crowd. Everybody gathered around the exit. A general officer, accompanied by two aides-de-camp, stepped out into the station-yard, where a motor-car stood waiting for him. The strains were heard of a military band; a battalion of light infantry marched down the road. Next came a team of sixteen horses, driven by artillery-men and dragging an enormous siege-piece which, in spite of the weight of its carriage, looked light, because of the extreme length of the gun. A herd of bullocks followed.

Paul, who was unable to find a porter, was standing on the pavement, carrying the two traveling-bags, when a man in leather gaiters, green velveteen breeches and a shooting-jacket with horn buttons, came up to him and raised his cap:

He had a powerful, open face, a skin hardened by exposure to the sun and the cold, hair that was already turning gray and that rather uncouth manner often displayed by old servants whose place allows them a certain degree of independence. For seventeen years he had lived on the great estate of Ornequin, above Corvigny, and managed it for Élisabeth’s father, the Comte d’Andeville.

“Ah, so you’re Jérôme?” cried Paul. “Good! I see you had the Comte d’Andeville’s letter. Have our servants come?”

“They arrived this morning, sir, the three of them; and they have been helping my wife and me to tidy up the house and make it ready to receive the master and the mistress.”