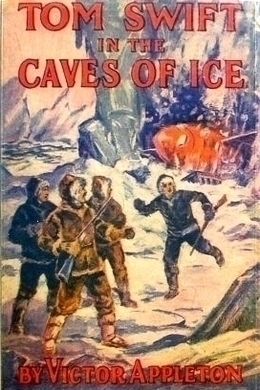 Tom Swift in the Caves of Ice

The Wreck of the Airship

Tom Swift & friends journey to the Arctic in his custom airship to seek for the legendary Valley of Gold. When his map is stolen by his longtime nemesis, Andy Foger, who has himself built a competing airship, the race is on across frigid Alaska to see who will be the first to find the limitless fortune. (source: Wikipedia)

“Yes, Rad, I think I will take a little flight. Perhaps I’ll go over to Waterford, and call on Mr. Damon. I haven’t seen very much of him, since we got back from our hunt after the diamond-makers.”

“Yes, Rad. Now, if you’ll help me, I’ll get out the Butterfly, and see what trim she’s in for a speedy flight.”

Tom Swift, the young inventor, aided by Eradicate Sampson, the colored helper of the Swift household, walked over toward a small shed.

A few minutes later the two had rolled into view, on its three bicycle wheels, a trim little monoplane–one of the speediest craft of the air that had ever skimmed along beneath the clouds. It was built to carry two, and had a very powerful motor.

“I guess it will work all right,” remarked the young inventor, for Tom Swift had not only built this monoplane himself, but was the originator of it, and the craft contained many new features.

“Look here, Rad,” spoke the lad, as a sudden idea came to him, “you’ve never ridden in an airship, have you?”

“But I go in them frequently, Eradicate. So does my father. You’ve seen us fly often enough, to know that it’s safe. Why, look at the number of times Mr. Damon and I have gone off on trips in this little Butterfly. Didn’t we always come back safely?”

“Yes, dat’s true, but dere might come a time when yo’ WOULDN’T come back, an’ den where’d Eradicate Sampson be? I axes yo’ dat–whar’d I be, Massa Tom?”

“Why, you wouldn’t be anywhere if you didn’t go, of course,” and Tom laughed. “But I’d like to take you for a little spin in this machine, Rad. I want you to get used to them. Sometime I may need you to help me. Come, now. Suppose you get up on this seat here, and I promise not to go too high until you get used to it. Come on, it will do you good, and think of what all your friends will say when they see you riding in an airship.”

It was clear that the colored man was being pursuaded somewhat against his will. Though he had been engaged by Tom Swift and his father off and on for several years, Eradicate had never shown any desire to take a trip through the air in one of the several craft Tom owned for this purpose. Nor had he ever evinced a longing for a trip under the ocean in a submarine, and as for riding in Tom’s speedy electric car–Eradicate would as soon have sat down with thirteen at the table, or looked at the moon over the wrong shoulder.

But now, somehow, there was a peculiar temptation to take his young employer at his word. Eradicate had seen, many times, the youthful inventor and his friends make trips in the monoplane, as well as in the big biplane and dirigible balloon combined–the RED CLOUD. Tom and the others had always come back safely, though often they met with accidents which only the skill and daring of the daring aeronaut had brought to a safe conclusion.

“Well, are you coming, Rad?” asked Tom, as he looked to see if the oil and gasoline tanks were filled, and gave a preliminary twirl to the propeller.

“Now does yo’ t’ink it am puffickly safe, Massa Tom?” and the colored man looked nervously at the machine.

“Of course, Rad. Otherwise I wouldn’t invite you. But I won’t take you far. I just want you to get used to it, and, once you have made a flight, you’ll want to make another.”

“I don’t nohow believe I will, Massa Tom, but as long as you have axed me, an’ as yo’ say some of dem proud, stuck-up darkies in Shopton will be tooken down a peg or two when de sees me, vhy, I will go wif yo’, Massa Tom.”

“I thought you would. Now take your place in the little seat next to where I’m going to sit. I’ll start the engine and jump in. Now sit perfectly still, and, whatever you do, don’t jump out. The ground’s pretty hard this morning. There was a frost last night.”

Eradicate, his heart growing fainter as the time of starting drew nearer, made as if he would leave the monoplane, in which he had taken his seat.

“Sit still!” yelled Tom. At that instant he started the propeller. The motor roared like a salvo of guns, and streaks of fire could be seen shooting from one cylinder to the other, until there was a perfect blast of explosions.