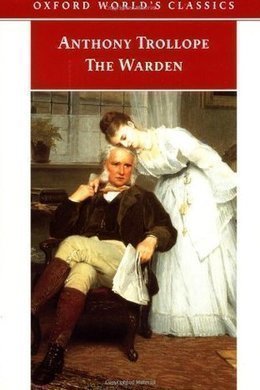 The Warden centers on Mr. Harding, a clergyman of great personal integrity who is nevertheless in possession of an income from a charity far in excess of the sum devoted to the purposes of the foundation. On discovering this, young John Bold turns his reforming zeal to exposing what he regards as an abuse of privilege, despite the fact that he is in love with Mr. Harding’s daughter Eleanor. It was a highly topical novel (a case regarding the misapplication of church funds was the scandalous subject of contemporary debate), but like other great Victorian novelists, Trollope uses the specific case to explore and illuminate the universal complexities of human motivation and social morality.

The Rev. Septimus Harding was, a few years since, a beneficed clergyman residing in the cathedral town of —-; let us call it Barchester. Were we to name Wells or Salisbury, Exeter, Hereford, or Gloucester, it might be presumed that something personal was intended; and as this tale will refer mainly to the cathedral dignitaries of the town in question, we are anxious that no personality may be suspected. Let us presume that Barchester is a quiet town in the West of England, more remarkable for the beauty of its cathedral and the antiquity of its monuments than for any commercial prosperity; that the west end of Barchester is the cathedral close, and that the aristocracy of Barchester are the bishop, dean, and canons, with their respective wives and daughters.

Early in life Mr Harding found himself located at Barchester. A fine voice and a taste for sacred music had decided the position in which he was to exercise his calling, and for many years he performed the easy but not highly paid duties of a minor canon. At the age of forty a small living in the close vicinity of the town increased both his work and his income, and at the age of fifty he became precentor of the cathedral.

Mr Harding had married early in life, and was the father of two daughters. The eldest, Susan, was born soon after his marriage; the other, Eleanor, not till ten years later.

At the time at which we introduce him to our readers he was living as precentor at Barchester with his youngest daughter, then twenty-four years of age; having been many years a widower, and having married his eldest daughter to a son of the bishop a very short time before his installation to the office of precentor.

Scandal at Barchester affirmed that had it not been for the beauty of his daughter, Mr Harding would have remained a minor canon; but here probably Scandal lied, as she so often does; for even as a minor canon no one had been more popular among his reverend brethren in the close than Mr Harding; and Scandal, before she had reprobated Mr Harding for being made precentor by his friend the bishop, had loudly blamed the bishop for having so long omitted to do something for his friend Mr Harding. Be this as it may, Susan Harding, some twelve years since, had married the Rev. Dr Theophilus Grantly, son of the bishop, archdeacon of Barchester, and rector of Plumstead Episcopi, and her father became, a few months later, precentor of Barchester Cathedral, that office being, as is not unusual, in the bishop’s gift.

Now there are peculiar circumstances connected with the precentorship which must be explained. In the year 1434 there died at Barchester one John Hiram, who had made money in the town as a wool-stapler, and in his will he left the house in which he died and certain meadows and closes near the town, still called Hiram’s Butts, and Hiram’s Patch, for the support of twelve superannuated wool-carders, all of whom should have been born and bred and spent their days in Barchester; he also appointed that an alms-house should be built for their abode, with a fitting residence for a warden, which warden was also to receive a certain sum annually out of the rents of the said butts and patches. He, moreover, willed, having had a soul alive to harmony, that the precentor of the cathedral should have the option of being also warden of the almshouses, if the bishop in each case approved.

From that day to this the charity had gone on and prospered–at least, the charity had gone on, and the estates had prospered. Wool-carding in Barchester there was no longer any; so the bishop, dean, and warden, who took it in turn to put in the old men, generally appointed some hangers-on of their own; worn-out gardeners, decrepit grave-diggers, or octogenarian sextons, who thankfully received a comfortable lodging and one shilling and fourpence a day, such being the stipend to which, under the will of John Hiram, they were declared to be entitled. Formerly, indeed,–that is, till within some fifty years of the present time,–they received but sixpence a day, and their breakfast and dinner was found them at a common table by the warden, such an arrangement being in stricter conformity with the absolute wording of old Hiram’s will: but this was thought to be inconvenient, and to suit the tastes of neither warden nor bedesmen, and the daily one shilling and fourpence was substituted with the common consent of all parties, including the bishop and the corporation of Barchester.