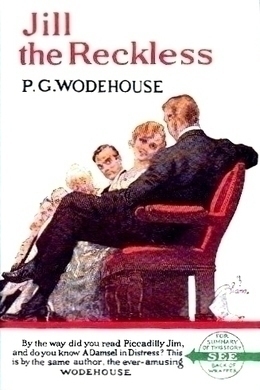 Jill had money and was engaged to be married to Sir Derek Underhill. But when she suddenly becomes penniless, she finds herself no longer engaged. Refusing to be beaten, she heads for New York, with a smile that betrays a tinge of recklessness, to join the chorus of ‘The Rose of America’.

Freddie Rooke gazed coldly at the breakfast-table. Through a gleaming eye-glass he inspected the revolting object which Barker, his faithful man, had placed on a plate before him.

“Barker!” His voice had a ring of pain.

Freddie averted his eyes with a silent shudder.

He got up, and, wrapping his dressing-gown about his long legs, took up a stand in front of the fireplace. From this position he surveyed the room, his shoulders against the mantelpiece, his calves pressing the club fender. It was a cheerful oasis in a chill and foggy world, a typical London bachelor’s breakfast-room. The walls were a restful grey, and the table, set for two, a comfortable arrangement in white and silver.

“If, on the morning after, you can tackle a poached egg, you are all right. If not, not. And don’t let anybody tell you otherwise.”

Freddie pressed the palm of his hand to his brow, and sighed.

“It would seem, then, that I must have revelled a trifle whole-heartedly last night. I was possibly a little blotto. Not whiffled, perhaps, but indisputably blotto. Did I make much noise coming in?”

Freddie moved to the table, and poured himself a cup of coffee.

“The cream jug is to your right, sir,” said the helpful Barker.

“Let it remain there. Café noir for me this morning. As noir as it can jolly well stick!” Freddie retired to the fireplace and sipped delicately. “As far as I can remember, it was Ronny Devereux’ birthday or something….”

“That’s right. Algy Martyn’s birthday, and Ronny and I were the guests. It all comes back to me. I wanted Derek to roll along and join the festivities–he’s never met Ronny–but he gave it a miss. Quite right! A chap in his position has responsibilities. Member of Parliament and all that. Besides,” said Freddie earnestly, driving home the point with a wave of his spoon, “he’s engaged to be married. You must remember that, Barker!”

“I will endeavour to, sir.”

“Sometimes,” said Freddie dreamily, “I wish I were engaged to be married. Sometimes I wish I had some sweet girl to watch over me and…. No, I don’t, by Jove. It would give me the utter pip! Is Sir Derek up yet, Barker?”

“See that everything is all right, will you? I mean as regards the food-stuffs and what not. I want him to make a good breakfast. He’s got to meet his mother this morning at Charing Cross. She’s legging it back from the Riviera.”

“You wouldn’t speak in that light, careless tone if you knew her! Well, you’ll see her to-night. She’s coming here to dinner.”

“Miss Mariner will be here, too. A foursome. Tell Mrs. Barker to pull up her socks and give us something pretty ripe. Soup, fish, all that sort of thing. She knows. And let’s have a stoup of malvoisie from the oldest bin. This is a special occasion!”

“Her ladyship will be meeting Miss Mariner for the first time, sir?”

“You’ve put your finger on it! Absolutely the first time on this or any stage! We must all rally round and make the thing a success.”

“I am sure Mrs. Barker will strain every nerve, sir.” Barker moved to the door, carrying the rejected egg, and stepped aside to allow a tall, well-built man of about thirty to enter. “Good morning, Sir Derek.”

Barker slid softly from the room. Derek Underhill sat down at the table. He was a strikingly handsome man, with a strong, forceful face, dark, lean and cleanly shaven. He was one of those men whom a stranger would instinctively pick out of a crowd as worthy of note. His only defect was that his heavy eyebrows gave him at times an expression which was a little forbidding. Women, however, had never been repelled by it. He was very popular with women, not quite so popular with men–always excepting Freddie Rooke, who worshipped him. They had been at school together, though Freddie was the younger by several years.

“We are not breakfasting this morning,” he replied. “The spirit was willing, but the jolly old flesh would have none of it. To be perfectly frank, the Last of the Rookes has a bit of a head.”

“A bit of sympathy,” said Freddie, pained, “would not be out of place. We are far from well. Some person unknown has put a threshing-machine inside the old bean and substituted a piece of brown paper for our tongue. Things look dark and yellow and wobbly!”

“You shouldn’t have overdone it last night.”