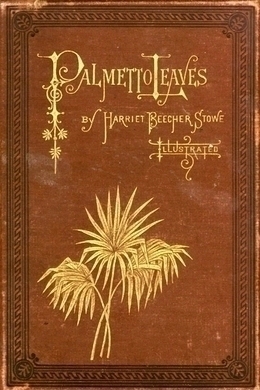 In 1867, Stowe settled in a small cottage in Mandarin, Florida, overlooking the St. Johns River. She had promised her Boston publisher another novel but was so taken with northeast Florida that she produced instead a series of sketches of the land and the people which she submitted in 1872 under the title Palmetto Leaves. Stowe describes life in Florida in the latter half of the 19th century—”a tumble-down, wild, panicky kind of life—this general happy-go-luckiness which Florida inculcates.” Her idyllic sketches of picnicking, sailing, and river touring expeditions and simple stories of events and people in this tropical winter summer land became the first unsolicited promotional writing to interest northern tourists in Florida.

Yes, here he comes again! Look at him! Whose dog is he? We are sitting around the little deck-house of the Savannah steamer, in that languid state of endurance which befalls voyagers, when, though the sky is clear, and the heavens blue, and the sea calm as a looking-glass, there is yet that gentle, treacherous, sliding rise and fall, denominated a ground-swell.

Reader, do you remember it? Of all deceitful demons of the deep, this same smooth, slippery, cheating ground-swell is the most diabolic. Because, you see, he is a mean imp, an underhanded, unfair, swindling scamp, who takes from you all the glory of endurance. Fair to the eye, plausible as possible, he says to you, “What’s the matter? What can you ask brighter than this sky, smoother than this sea, more glossy and calm than these rippling waves? How fortunate that you have such an exceptionally smooth voyage!”

And yet look around the circle of pale faces fixed in that grim expression of endurance, the hands belonging to them resolutely clasping lemons,–those looks of unutterable, repressed disgust and endurance. Are these people seasick? Oh, no! of course not. “Of course,” says the slippery, plausible demon, “these people can’t be sick in this delightful weather, and with this delightful, smooth sea!”

But here comes the dog, now slowly drooping from one to another,–the most woe-begone and dejected of all possible dogs. Not a bad-looking dog, either; not without signs about him of good dog blood.

We say one to another, as we languidly review his points, “His hair is fine and curly: he has what might be a fine tail, were it not drooping in such abject dejection and discouragement. Evidently this is a dog that has seen better days,–a dog that has belonged to somebody, and taken kindly to petting.” His long nose, and great limpid, half-human eyes, have a suggestion of shepherd-dog blood about them.

He comes and seats himself opposite, and gazes at you with a pitiful, wistful, intense gaze, as much as to say, “Oh! do you know where HE is? and how came I here?–poor, miserable dog that I am!” He walks in a feeble, discouraged way to the wheel-house, and sniffs at the salt water that spatters there; gives one lick, and stops, and comes and sits quietly down again: it’s “no go.”

“Poor fellow! he’s thirsty,” says one; and the Professor, albeit not the most nimble of men, climbs carefully down the cabin-stairs for a tumbler of water, brings it up, and places it before him. Eagerly he laps it all up; and then, with the confiding glance of a dog not unused to kindness, looks as if he would like more. Another of the party fills his tumbler, and he drinks that.

“Why, poor fellow, see how thirsty he was!” “I wonder whose dog he is?” “Somebody ought to see to this dog!” are comments passing round among the ladies, who begin throwing him bits of biscuit, which he snaps up eagerly.

“He’s hungry too. Only see how hungry he is! Nobody feeds this dog. Whom does he belong to?”

One of the ship’s stewards, passing, throws in a remark, “That dog’s seasick: that’s what’s the matter with him. It won’t do to feed that dog; it won’t: it’ll make terrible work.”

Evidently some stray dog, that has come aboard the steamer by accident,–looking for a lost master, perhaps; and now here he is alone and forlorn. Nobody’s dog!

One of the company, a gentle, fair-haired young girl, begins stroking his rough, dusty hair, which though fine, and capable of a gloss if well kept, now is full of sticks and straws. An unseemly patch of tar disfigures his coat on one side, which seems to worry him: for he bites at it now and then aimlessly; then looks up with a hopeless, appealing glance, as much as to say, “I know I am looking like a fright; but I can’t help it. Where is HE? and where am I? and what does it all mean?”

But the caresses of the fair-haired lady inspire him with a new idea. He will be “nobody’s dog” no longer: he will choose a mistress.

From that moment he is like a shadow to the fair-haired lady: he follows her steps everywhere, mournful, patient, with drooping tail and bowed head, as a dog not sure of his position, but humbly determined to have a mistress if dogged faith and persistency can compass it. She walks the deck; and tick, tick, pitapat, go the four little paws after her. She stops: he stops, and looks wistful. Whenever and wherever she sits down, he goes and sits at her feet, and looks up at her with eyes of unutterable entreaty.