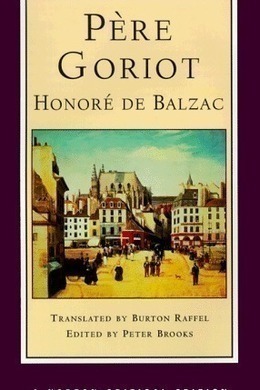 Pere Goriot is the tragic story of a father whose obsessive love for his two daughters leads to his financial and personal ruin. Interwoven with this theme is that of the impoverished young aristocrat, Rastignac, come to Paris from the provinces to make his fortune, who befriends Goriot and becomes involved with the daughters. The story is set against the background of a whole society driven by social ambition and lust for money.

Mme. Vauquer is an elderly person, who for the past forty years has kept a lodging-house in the Rue Nueve-Sainte-Genevieve, in the district that lies between the Latin Quarter and the Faubourg Saint-Marcel. Her house (known in the neighborhood as the Maison Vauquer) receives men and women, old and young, and no word has ever been breathed against her respectable establishment; but, at the same time, it must be said that as a matter of fact no young woman has been under her roof for thirty years, and that if a young man stays there for any length of time it is a sure sign that his allowance must be of the slenderest. In 1819, however, the time when this drama opens, there was an almost penniless young girl among Mme. Vauquer’s boarders.

That word drama has been somewhat discredited of late; it has been overworked and twisted to strange uses in these days of dolorous literature; but it must do service again here, not because this story is dramatic in the restricted sense of the word, but because some tears may perhaps be shed intra et extra muros before it is over.

Will any one without the walls of Paris understand it? It is open to doubt. The only audience who could appreciate the results of close observation, the careful reproduction of minute detail and local color, are dwellers between the heights of Montrouge and Montmartre, in a vale of crumbling stucco watered by streams of black mud, a vale of sorrows which are real and joys too often hollow; but this audience is so accustomed to terrible sensations, that only some unimaginable and well-neigh impossible woe could produce any lasting impression there. Now and again there are tragedies so awful and so grand by reason of the complication of virtues and vices that bring them about, that egotism and selfishness are forced to pause and are moved to pity; but the impression that they receive is like a luscious fruit, soon consumed. Civilization, like the car of Juggernaut, is scarcely stayed perceptibly in its progress by a heart less easy to break than the others that lie in its course; this also is broken, and Civilization continues on her course triumphant. And you, too, will do the like; you who with this book in your white hand will sink back among the cushions of your armchair, and say to yourself, “Perhaps this may amuse me.” You will read the story of Father Goriot’s secret woes, and, dining thereafter with an unspoiled appetite, will lay the blame of your insensibility upon the writer, and accuse him of exaggeration, of writing romances. Ah! once for all, this drama is neither a fiction nor a romance! All is true,–so true, that every one can discern the elements of the tragedy in his own house, perhaps in his own heart.

The lodging-house is Mme. Vauquer’s own property. It is still standing in the lower end of the Rue Nueve-Sainte-Genevieve, just where the road slopes so sharply down to the Rue de l’Arbalete, that wheeled traffic seldom passes that way, because it is so stony and steep. This position is sufficient to account for the silence prevalent in the streets shut in between the dome of the Pantheon and the dome of the Val-de-Grace, two conspicuous public buildings which give a yellowish tone to the landscape and darken the whole district that lies beneath the shadow of their leaden-hued cupolas.

In that district the pavements are clean and dry, there is neither mud nor water in the gutters, grass grows in the chinks of the walls. The most heedless passer-by feels the depressing influences of a place where the sound of wheels creates a sensation; there is a grim look about the houses, a suggestion of a jail about those high garden walls. A Parisian straying into a suburb apparently composed of lodging-houses and public institutions would see poverty and dullness, old age lying down to die, and joyous youth condemned to drudgery. It is the ugliest quarter of Paris, and, it may be added, the least known. But, before all things, the Rue Nueve-Sainte-Genevieve is like a bronze frame for a picture for which the mind cannot be too well prepared by the contemplation of sad hues and sober images. Even so, step by step the daylight decreases, and the cicerone’s droning voice grows hollower as the traveler descends into the Catacombs. The comparison holds good! Who shall say which is more ghastly, the sight of the bleached skulls or of dried-up human hearts?