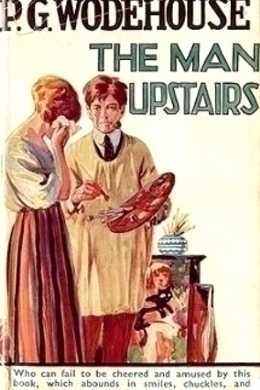 Wodehouse’s well-known gift for satisfying plots and comic surprises is evident on every page, but there are also signs of his debt to earlier writers in the realistic tradition. Set mainly in London or New York, many of the stories concern ordinary people - shopassistants, schoolmasters, secretaries, servants, unsuccessful writers - living the life of rented rooms and cheap cafes. Wodehouse knew well from his own experience. Yet there is nothing sad or gloomy about these tales. Far from it: they are brimming with life and energy, beautifully written and invariably delightful. And for Wodehouse addicts there is also a goodly sprinkling of goofy young men about town and their valets to satisfy the strongest appetites. Includes;

In Alcala, as in most of New York’s apartment houses, the schedule of prices is like a badly rolled cigarette–thick in the middle and thin at both ends. The rooms half-way up are expensive; some of them almost as expensive as if Fashion, instead of being gone for ever, were still lingering. The top rooms are cheap, the ground-floor rooms cheaper still.

Cheapest of all was the hall-bedroom. Its furniture was of the simplest. It consisted of a chair, another chair, a worn carpet, and a folding-bed. The folding-bed had an air of depression and baffled hopes. For years it had been trying to look like a bookcase in the daytime, and now it looked more like a folding-bed than ever. There was also a plain deal table, much stained with ink. At this, night after night, sometimes far into the morning, Rutherford Maxwell would sit and write stories. Now and then it happened that one would be a good story, and find a market.

Rutherford Maxwell was an Englishman, and the younger son of an Englishman; and his lot was the lot of the younger sons all the world over. He was by profession one of the numerous employees of the New Asiatic Bank, which has its branches all over the world. It is a sound, trustworthy institution, and steady-going relatives would assure Rutherford that he was lucky to have got a berth in it. Rutherford did not agree with them. However sound and trustworthy, it was not exactly romantic. Nor did it err on the side of over-lavishness to those who served it. Rutherford’s salary was small. So were his prospects–if he remained in the bank. At a very early date he had registered a vow that he would not. And the road that led out of it for him was the uphill road of literature.

He was thankful for small mercies. Fate had not been over-kind up to the present, but at least she had dispatched him to New York, the centre of things, where he would have the chance to try, instead of to some spot off the map. Whether he won or lost, at any rate he was in the ring, and could fight. So every night he sat in Alcala, and wrote. Sometimes he would only try to write, and that was torture.

There is never an hour of the day or night when Alcala is wholly asleep. The middle of the house is a sort of chorus-girl belt, while in the upper rooms there are reporters and other nightbirds. Long after he had gone to bed, Rutherford would hear footsteps passing his door and the sound of voices in the passage. He grew to welcome them. They seemed to connect him with the outer world. But for them he was alone after he had left the office, utterly alone, as it is possible to be only in the heart of a great city. Some nights he would hear scraps of conversations, at rare intervals a name. He used to build up in his mind identities for the owners of the names. One in particular, Peggy, gave him much food for thought. He pictured her as bright and vivacious. This was because she sang sometimes as she passed his door. She had been singing when he first heard her name. ‘Oh, cut it out, Peggy,’ a girl’s voice had said. ‘Don’t you get enough of that tune at the theatre?’ He felt that he would like to meet Peggy.

June came, and July, making an oven of New York, bringing close, scorching days and nights when the pen seemed made of lead; and still Rutherford worked on, sipping ice-water, in his shirt-sleeves, and filling the sheets of paper slowly, but with a dogged persistence which the weather could not kill. Despite the heat, he was cheerful. Things were beginning to run his way a little now. A novelette, an airy trifle, conceived in days when the thermometer was lower and it was possible to think, and worked out almost mechanically, had been accepted by a magazine of a higher standing than those which hitherto had shown him hospitality. He began to dream of a holiday in the woods. The holiday spirit was abroad. Alcala was emptying itself. It would not be long before he too would be able to get away.

He was so deep in his thoughts that at first he did not hear the knocking at the door. But it was a sharp, insistent knocking, and forced itself upon his attention. He got up and turned the handle.

Outside in the passage was standing a girl, tall and sleepy-eyed. She wore a picture-hat and a costume the keynote of which was a certain aggressive attractiveness. There was no room for doubt as to which particular brand of scent was her favourite at the moment.

She gazed at Rutherford dully. Like Banquo’s ghost, she had no speculation in her eyes. Rutherford looked at her inquiringly, somewhat conscious of his shirt-sleeves.

‘Did you knock?’ he said, opening, as a man must do, with the inevitable foolish question.

‘What?’ said the apparition.