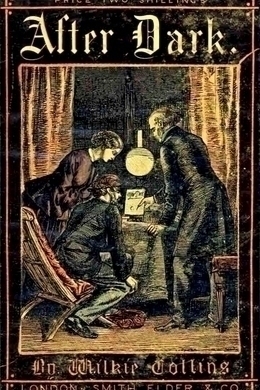 A series of tales supposed to be told to a portrait-painter by his sitters; the framework tells us how he came to think of publishing the stories thus collected; the introductions describe the circumstances under which the tales were told. These portions have a delicate every-day interest. The tales are stories of adventure, well varied, and often striking in the incidents, or with thrilling situations; and are as pleasant reading as a novel reader could desire.

Before I begin, by the aid of my wife’s patient attention and ready pen, to relate any of the stories which I have heard at various times from persons whose likenesses I have been employed to take, it will not be amiss if I try to secure the reader’s interest in the following pages, by briefly explaining how I became possessed of the narrative matter which they contain.

Of myself I have nothing to say, but that I have followed the profession of a traveling portrait-painter for the last fifteen years. The pursuit of my calling has not only led me all through England, but has taken me twice to Scotland, and once to Ireland. In moving from district to district, I am never guided beforehand by any settled plan. Sometimes the letters of recommendation which I get from persons who are satisfied with the work I have done for them determine the direction in which I travel. Sometimes I hear of a new neighborhood in which there is no resident artist of ability, and remove thither on speculation. Sometimes my friends among the picture-dealers say a good word on my behalf to their rich customers, and so pave the way for me in the large towns. Sometimes my prosperous and famous brother-artists, hearing of small commissions which it is not worth their while to accept, mention my name, and procure me introductions to pleasant country houses. Thus I get on, now in one way and now in another, not winning a reputation or making a fortune, but happier, perhaps, on the whole, than many men who have got both the one and the other. So, at least, I try to think now, though I started in my youth with as high an ambition as the best of them. Thank God, it is not my business here to speak of past times and their disappointments. A twinge of the old hopeless heartache comes over me sometimes still, when I think of my student days.

One peculiarity of my present way of life is, that it brings me into contact with all sorts of characters. I almost feel, by this time, as if I had painted every civilized variety of the human race. Upon the whole, my experience of the world, rough as it has been, has not taught me to think unkindly of my fellow-creatures. I have certainly received such treatment at the hands of some of my sitters as I could not describe without saddening and shocking any kind-hearted reader; but, taking one year and one place with another, I have cause to remember with gratitude and respect–sometimes even with friendship and affection–a very large proportion of the numerous persons who have employed me.

Some of the results of my experience are curious in a moral point of view. For example, I have found women almost uniformly less delicate in asking me about my terms, and less generous in remunerating me for my services, than men. On the other hand, men, within my knowledge, are decidedly vainer of their personal attractions, and more vexatiously anxious to have them done full justice to on canvas, than women. Taking both sexes together, I have found young people, for the most part, more gentle, more reasonable, and more considerate than old. And, summing up, in a general way, my experience of different ranks (which extends, let me premise, all the way down from peers to publicans), I have met with most of my formal and ungracious receptions among rich people of uncertain social standing: the highest classes and the lowest among my employers almost always contrive–in widely different ways, of course, to make me feel at home as soon as I enter their houses.

The one great obstacle that I have to contend against in the practice of my profession is not, as some persons may imagine, the difficulty of making my sitters keep their heads still while I paint them, but the difficulty of getting them to preserve the natural look and the every-day peculiarities of dress and manner. People will assume an expression, will brush up their hair, will correct any little characteristic carelessness in their apparel–will, in short, when they want to have their likenesses taken, look as if they were sitting for their pictures. If I paint them, under these artificial circumstances, I fail of course to present them in their habitual aspect; and my portrait, as a necessary consequence, disappoints everybody, the sitter always included. When we wish to judge of a man’s character by his handwriting, we want his customary scrawl dashed off with his common workaday pen, not his best small-text, traced laboriously with the finest procurable crow-quill point. So it is with portrait-painting, which is, after all, nothing but a right reading of the externals of character recognizably presented to the view of others.