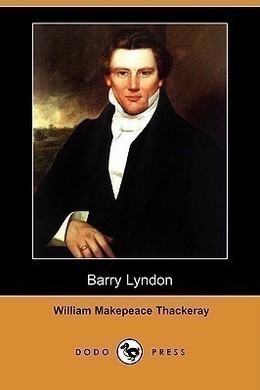 Set in late 18th century Europe the adventures and mis-adventures of a minor member of the Irish gentry trying to better himself. Redmond Barry of Bally Barry is a clever young man, who learns the manners of a gentleman. This serves him well, for the next few decades he meanders through Europe, as a soldier, mercenary, gambler, and vagabond. He reaches the pinnacle of worldly success by marriage to an English heiress, but disastrously squanders her fortune and good will. In 1975 Stanley Kubrick released a movie based on this novel.

Since the days of Adam, there has been hardly a mischief done in this world but a woman has been at the bottom of it. Ever since ours was a family (and that must be very NEAR Adam’s time,–so old, noble, and illustrious are the Barrys, as everybody knows) women have played a mighty part with the destinies of our race.

I presume that there is no gentleman in Europe that has not heard of the house of Barry of Barryogue, of the kingdom of Ireland, than which a more famous name is not to be found in Gwillim or D’Hozier; and though, as a man of the world, I have learned to despise heartily the claims of some PRETENDERS to high birth who have no more genealogy than the lacquey who cleans my boots, and though I laugh to utter scorn the boasting of many of my countrymen, who are all for descending from kings of Ireland, and talk of a domain no bigger than would feed a pig as if it were a principality; yet truth compels me to assert that my family was the noblest of the island, and, perhaps, of the universal world; while their possessions, now insignificant and torn from us by war, by treachery, by the loss of time, by ancestral extravagance, by adhesion to the old faith and monarch, were formerly prodigious, and embraced many counties, at a time when Ireland was vastly more prosperous than now. I would assume the Irish crown over my coat-of-arms, but that there are so many silly pretenders to that distinction who bear it and render it common.

Who knows, but for the fault of a woman, I might have been wearing it now? You start with incredulity. I say, why not? Had there been a gallant chief to lead my countrymen, instead or puling knaves who bent the knee to King Richard II., they might have been freemen; had there been a resolute leader to meet the murderous ruffian Oliver Cromwell, we should have shaken off the English for ever. But there was no Barry in the field against the usurper; on the contrary, my ancestor, Simon de Bary, came over with the first-named monarch, and married the daughter of the then King of Munster, whose sons in battle he pitilessly slew.

In Oliver’s time it was too late for a chief of the name of Barry to lift up his war-cry against that of the murderous brewer. We were princes of the land no longer; our unhappy race had lost its possessions a century previously, and by the most shameful treason. This I know to be the fact, for my mother has often told me the story, and besides had worked it in a worsted pedigree which hung up in the yellow saloon at Barryville where we lived.

That very estate which the Lyndons now possess in Ireland was once the property of my race. Rory Barry of Barryogue owned it in Elizabeth’s time, and half Munster beside. The Barry was always in feud with the O’Mahonys in those times; and, as it happened, a certain English colonel passed through the former’s country with a body of men-at-arms, on the very day when the O’Mahonys had made an inroad upon our territories, and carried off a frightful plunder of our flocks and herds.

This young Englishman, whose name was Roger Lyndon, Linden, or Lyndaine, having been most hospitably received by the Barry, and finding him just on the point of carrying an inroad into the O’Mahonys’ land, offered the aid of himself and his lances, and behaved himself so well, as it appeared, that the O’Mahonys were entirely overcome, all the Barrys’ property restored, and with it, says the old chronicle, twice as much of the O’Mahonys’ goods and cattle.

It was the setting in of the winter season, and the young soldier was pressed by the Barry not to quit his house of Barryogue, and remained there during several months, his men being quartered with Barry’s own gallowglasses, man by man in the cottages round about. They conducted themselves, as is their wont, with the most intolerable insolence towards the Irish; so much so, that fights and murders continually ensued, and the people vowed to destroy them.

The Barry’s son (from whom I descend) was as hostile to the English as any other man on his domain; and, as they would not go when bidden, he and his friends consulted together and determined on destroying these English to a man.

But they had let a woman into their plot, and this was the Barry’s daughter. She was in love with the English Lyndon, and broke the whole secret to him; and the dastardly English prevented the just massacre of themselves by falling on the Irish, and destroying Phaudrig Barry, my ancestor, and many hundreds of his men. The cross at Barrycross near Carrignadihioul is the spot where the odious butchery took place.