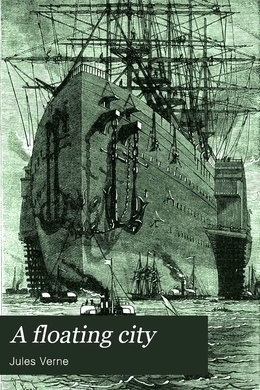 A Floating City, enjoyed a popularity almost equal to that of Round the World in Eighty Days. It was the direct result of the trip which the author actually made to America in 1867, on the largest iron ship ever built. He gives us a faithful picture of the natural and usual incidents of an ocean voyage of those days, enlivening these by introducing a romance aboard ship. The pictures of the “Great Eastern,” are of course exaggerated, not so much in words themselves as in the impressions they convey. But the pictures of New York and of Niagara are the genuine imprint made upon the great writer by his visit.

On the 18th of March, 1867, I arrived at Liverpool, intending to take a berth simply as an amateur traveller on board the “Great Eastern,” which in a few days was to sail for New York. I had sometimes thought of paying a visit to North America, and was now tempted to cross the Atlantic on board this gigantic boat. First of all the “Great Eastern,” then the country celebrated by Cooper.

This steam-ship is indeed a masterpiece of naval construction; more than a vessel, it is a floating city, part of the country, detached from English soil, which after having crossed the sea, unites itself to the American Continent. I pictured to myself this enormous bulk borne on the waves, her defiant struggle with the wind, her boldness before the powerless sea, her indifference to the billows, her stability in the midst of that element which tosses “Warriors” and “Solferinos” like ship’s boats. But my imagination carried me no farther; all these things I did indeed see during the passage, and many others which do not exclusively belong to the maritime domain. If the “Great Eastern” is not merely a nautical engine, but rather a microcosm, and carries a small world with it, an observer will not be astonished to meet here, as on a larger theatre, all the instincts, follies, and passions of human nature.

On leaving the station, I went to the Adelphi Hotel. The “Great Eastern” was announced to sail on the 20th of March, and as I wished to witness the last preparations, I asked permission of Captain Anderson, the commander, to take my place on board immediately, which permission he very obligingly granted.

The next day I went down towards the basins which form a double line of docks on the banks of the Mersey. The gate-keepers allowed me to go on to Prince’s Landing-Stage, a kind of movable raft which rises and falls with the tide, and is a landing place for the numerous boats which run between Liverpool, and the opposite town of Birkenhead on the left bank of the Mersey.

The Mersey, like the Thames, is only an insignificant stream, unworthy the name of river, although it falls into the sea.

It is an immense depression of the land filled with water, in fact nothing more than a hole, the depth of which allows it to receive ships of the heaviest tonnage, such as the “Great Eastern,” to which almost every other port in the world is closed. Thanks to this natural condition, the streams of the Thames and the Mersey have seen two immense commercial cities, London and Liverpool, built almost at their mouths, and from a similar cause has Glasgow arisen on the Clyde.

At Prince’s Landing-Stage, a small tug in the service of the “Great Eastern” was getting up steam. I went on board and found it already crowded with workmen and mechanics. As the clock in Victoria Tower struck seven, the tender left her moorings and quickly ascended the Mersey with the rising tide.

Scarcely had we started, when I saw on the quay a tall young man, with that aristocratic look which so distinguishes the English officer. I thought I recognized in him a friend whom I had not seen for several years, a captain in the Indian army; but I must have been mistaken, for Captain Mac Elwin could not have left Bombay, as I ought to have known, besides Mac Elwin was a gay, careless fellow, and a jovial companion, but this person, if he resembled him in feature, seemed melancholy, and as though burdened with a secret grief. Be it as it may, I had not time to observe him more closely, for the tender was moving rapidly away, and the impression founded on this resemblance soon vanished from my mind.

The “Great Eastern” was anchored about three miles up the river, at a depth equal to the height of the tallest houses in Liverpool. She was not to be seen from Prince’s Stage, but I caught a glimpse of her imposing bulk from the first bend in the river.

One would have taken her for a small island, hardly discernible in the mist. She appeared with her bows towards us, having swung round with the tide; but soon the tender altered her course, and the whole length of the steam-ship was presented to our view; she seemed what in fact she was—enormous! Three or four colliers alongside were pouring their cargoes of coal into her port-holes. Beside the “Great Eastern,” these three-mast ships looked like barges; their chimneys did not even reach the first line of light-ports in her hull; the yards of their gallant-sails did not come up to her bulwarks. The giant could have hoisted these ships on its davits like shore-boats.

Meanwhile the tender approached the “Great Eastern,” whose chains were violently strained by the pressure of the tide, and ranged up to the foot of an immense winding staircase, on the larboard side. In this position the deck of the tender was only on a level with the load water-line of the steam-ship, to which line she would be depressed when in full cargo, and which still emerged two yards.