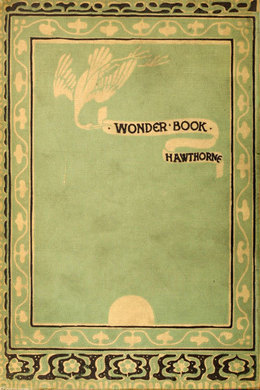 A Wonder-Book for Boys and Girls is a classic retelling for children of some of the most famous stories from Greek mythology. In this collection you will find the stories of The Gorgon’s Head, The Golden Touch, The Paradise of Children, The Three Golden Apples, The Miraculous Pitcher, and The Chimæra. Hawthorne’s A Wonder-Book for Boys and Girls is an excellent collection of stories of adventure and fantasy which serves as a great introduction to Greek mythology for younger readers.

Beneath the porch of the country-seat called Tanglewood, one fine autumnal morning, was assembled a merry party of little folks, with a tall youth in the midst of them. They had planned a nutting expedition, and were impatiently waiting for the mists to roll up the hill-slopes, and for the sun to pour the warmth of the Indian summer over the fields and pastures, and into the nooks of the many-colored woods. There was a prospect of as fine a day as ever gladdened the aspect of this beautiful and comfortable world. As yet, however, the morning mist filled up the whole length and breadth of the valley, above which, on a gently sloping eminence, the mansion stood.

This body of white vapor extended to within less than a hundred yards of the house. It completely hid everything beyond that distance, except a few ruddy or yellow tree-tops, which here and there emerged, and were glorified by the early sunshine, as was likewise the broad surface of the mist. Four or five miles off to the southward rose the summit of Monument Mountain, and seemed to be floating on a cloud. Some fifteen miles farther away, in the same direction, appeared the loftier Dome of Taconic, looking blue and indistinct, and hardly so substantial as the vapory sea that almost rolled over it. The nearer hills, which bordered the valley, were half submerged, and were specked with little cloud-wreaths all the way to their tops. On the whole, there was so much cloud, and so little solid earth, that it had the effect of a vision.

The children above-mentioned, being as full of life as they could hold, kept overflowing from the porch of Tanglewood, and scampering along the gravel-walk, or rushing across the dewy herbage of the lawn. I can hardly tell how many of these small people there were; not less than nine or ten, however, nor more than a dozen, of all sorts, sizes, and ages, whether girls or boys. They were brothers, sisters, and cousins, together with a few of their young acquaintances, who had been invited by Mr. and Mrs. Pringle to spend some of this delightful weather with their own children at Tanglewood. I am afraid to tell you their names, or even to give them any names which other children have ever been called by; because, to my certain knowledge, authors sometimes get themselves into great trouble by accidentally giving the names of real persons to the characters in their books. For this reason I mean to call them Primrose, Periwinkle, Sweet Fern, Dandelion, Blue Eye, Clover, Huckleberry, Cowslip, Squash-Blossom, Milkweed, Plantain, and Buttercup; although, to be sure, such titles might better suit a group of fairies than a company of earthly children.

It is not to be supposed that these little folks were to be permitted by their careful fathers and mothers, uncles, aunts, or grandparents, to stray abroad into the woods and fields, without the guardianship of some particularly grave and elderly person. Oh, no, indeed! In the first sentence of my book, you will recollect that I spoke of a tall youth, standing in the midst of the children. His name–(and I shall let you know his real name, because he considers it a great honor to have told the stories that are here to be printed)–his name was Eustace Bright. He was a student at Williams College, and had reached, I think, at this period, the venerable age of eighteen years; so that he felt quite like a grandfather towards Periwinkle, Dandelion, Huckleberry, Squash-Blossom, Milkweed, and the rest, who were only half or a third as venerable as he. A trouble in his eyesight (such as many students think it necessary to have, nowadays, in order to prove their diligence at their books) had kept him from college a week or two after the beginning of the term. But, for my part, I have seldom met with a pair of eyes that looked as if they could see farther or better than those of Eustace Bright.

This learned student was slender, and rather pale, as all Yankee students are; but yet of a healthy aspect, and as light and active as if he had wings to his shoes. By the by, being much addicted to wading through streamlets and across meadows, he had put on cowhide boots for the expedition. He wore a linen blouse, a cloth cap, and a pair of green spectacles, which he had assumed, probably, less for the preservation of his eyes than for the dignity that they imparted to his countenance. In either case, however, he might as well have let them alone; for Huckleberry, a mischievous little elf, crept behind Eustace as he sat on the steps of the porch, snatched the spectacles from his nose, and clapped them on her own; and as the student forgot to take them back, they fell off into the grass, and lay there till the next spring.