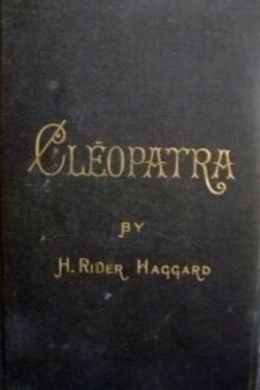 Haggard tells the story of Cleopatra from the viewpoint of an Ancient Egyptian priest who is given the responsibility of overthrowing the supposed impostor Cleopatra. Haggard, who often employed hints of adventure and exoticism, portrayed Cleopatra as witty and devious, and she has an overwhelming presence that all can feel. Cleopatra, like the other characters, is both good and evil at the same time; forcing readers to both empathize and despise her. Thought provoking and beautifully illustrated, this classic tale captures the imagination of readers of all ages and inspires a love of literature and reading.

By Osiris who sleeps at Abouthis, I write the truth.

I, Harmachis, Hereditary Priest of the Temple, reared by the divine Sethi, aforetime a Pharaoh of Egypt, and now justified in Osiris and ruling in Amenti. I, Harmachis, by right Divine and by true descent of blood King of the Double Crown, and Pharaoh of the Upper and Lower Land. I, Harmachis, who cast aside the opening flower of our hope, who turned from the glorious path, who forgot the voice of God in hearkening to the voice of woman. I, Harmachis, the fallen, in whom are gathered up all woes as waters are gathered in a desert well, who have tasted of every shame, who through betrayal have betrayed, who in losing the glory that is here have lost the glory which is to be, who am utterly undone–I write, and, by Him who sleeps at Abouthis, I write the truth.

O Egypt!–dear land of Khem, whose black soil nourished up my mortal part–land that I have betrayed–O Osiris!–Isis!–Horus!–ye Gods of Egypt whom I have betrayed!–O ye temples whose pylons strike the sky, whose faith I have betrayed!–O Royal blood of the Pharaohs of eld, that yet runs within these withered veins–whose virtue I have betrayed!–O Invisible Essence of all Good! and O Fate, whose balance rested on my hand–hear me; and, to the day of utter doom, bear me witness that I write the truth.

Even while I write, beyond the fertile fields, the Nile is running red, as though with blood. Before me the sunlight beats upon the far Arabian hills, and falls upon the piles of Abouthis. Still the priests make orison within the temples at Abouthis that know me no more; still the sacrifice is offered, and the stony roofs echo back the people’s prayers. Still from this lone cell within my prison-tower, I, the Word of Shame, watch thy fluttering banners, Abouthis, flaunting from thy pylon walls, and hear the chants as the long procession winds from sanctuary to sanctuary.

Abouthis, lost Abouthis! my heart goes out toward thee! For the day comes when the desert sands shall fill thy secret places! Thy Gods are doomed, O Abouthis! New Faiths shall make a mock of all thy Holies, and Centurion shall call upon Centurion across thy fortress-walls. I weep–I weep tears of blood: for mine is the sin that brought about these evils and mine for ever is their shame.

Behold, it is written hereafter.

Here in Abouthis I was born, I, Harmachis, and my father, the justified in Osiris, was High Priest of the Temple of Sethi. And on that same day of my birth Cleopatra, the Queen of Egypt, was born also. I passed my youth in yonder fields watching the baser people at their labours and going in and out at will among the great courts of the temples. Of my mother I knew naught, for she died when I yet hung at the breast. But before she died in the reign of Ptolemy Aulêtes, who is named the Piper, so did the old wife, Atoua, told me, my mother took a golden uræus, the snake symbol of our Royalty of Egypt, from a coffer of ivory and laid it on my brow. And those who saw her do this believed that she was distraught of the Divinity, and in her madness foreshadowed that the day of the Macedonian Lagidæ was ended, and that Egypt’s sceptre should pass again to the hand of Egypt’s true and Royal race. But when my father, the old High Priest Amenemhat, whose only child I was, she who was his wife before my mother having been, for what crime I know not, cursed with barrenness by Sekhet: I say when my father came in and saw what the dying woman had done, he lifted up his hands towards the vault of heaven and adored the Invisible, because of the sign that had been sent. And as he adored, the Hathors filled my dying mother with the Spirit of Prophecy, and she rose in strength from the couch and prostrated herself thrice before the cradle where I lay asleep, the Royal asp upon my brow, crying aloud:

“Hail to thee, fruit of my womb! Hail to thee, Royal child! Hail to thee, Pharaoh that shalt be! Hail to thee, God that shalt purge the land, Divine seed of Nekt-nebf, the descended from Isis. Keep thee pure, and thou shalt rule and deliver Egypt and not be broken. But if thou dost fail in thy hour of trial, then may the curse of all the Gods of Egypt rest upon thee, and the curse of thy Royal forefathers, the justified, who ruled the land before thee from the age of Horus. Then in life mayst thou be wretched, and after death may Osiris refuse thee, and the judges of Amenti give judgment against thee, and Set and Sekhet torment thee, till such time as thy sin is purged, and the Gods of Egypt, called by strange names, are once more worshipped in the Temples of Egypt, and the staff of the Oppressor is broken, and the footsteps of the Foreigner are swept clean, and the thing is accomplished as thou in thy weakness shalt cause it to be done.”