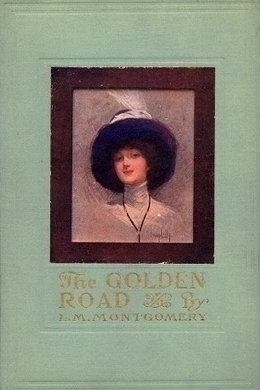 When Sara Stanley, The Story Girl, returns to Carlisle to spend the winter with the King family, she comes up with a great idea. To help them through the dreary months ahead, she, Felicity, Cecily, and Dan will publish a magazine. From “Personals” to “Fashion Notes” to an etiquette column and stories of the most interesting happenings in Carlisle, Our Magazine quickly becomes the most entertaining publication anyone in town has ever read. But seasons pass, nothing is forever – and soon it will be time for the Story Girl to leave her good friends on Prince Edward Island, friends with whom she has walked the golden road of youth.

“I’ve thought of something amusing for the winter,” I said as we drew into a half-circle around the glorious wood-fire in Uncle Alec’s kitchen.

It had been a day of wild November wind, closing down into a wet, eerie twilight. Outside, the wind was shrilling at the windows and around the eaves, and the rain was playing on the roof. The old willow at the gate was writhing in the storm and the orchard was a place of weird music, born of all the tears and fears that haunt the halls of night. But little we cared for the gloom and the loneliness of the outside world; we kept them at bay with the light of the fire and the laughter of our young lips.

We had been having a splendid game of Blind-Man’s Buff. That is, it had been splendid at first; but later the fun went out of it because we found that Peter was, of malice prepense, allowing himself to be caught too easily, in order that he might have the pleasure of catching Felicity–which he never failed to do, no matter how tightly his eyes were bound. What remarkable goose said that love is blind? Love can see through five folds of closely-woven muffler with ease!

“I’m getting tired,” said Cecily, whose breath was coming rather quickly and whose pale cheeks had bloomed into scarlet. “Let’s sit down and get the Story Girl to tell us a story.”

But as we dropped into our places the Story Girl shot a significant glance at me which intimated that this was the psychological moment for introducing the scheme she and I had been secretly developing for some days. It was really the Story Girl’s idea and none of mine. But she had insisted that I should make the suggestion as coming wholly from myself.

“If you don’t, Felicity won’t agree to it. You know yourself, Bev, how contrary she’s been lately over anything I mention. And if she goes against it Peter will too–the ninny!–and it wouldn’t be any fun if we weren’t all in it.”

“What is it?” asked Felicity, drawing her chair slightly away from Peter’s.

“It is this. Let us get up a newspaper of our own–write it all ourselves, and have all we do in it. Don’t you think we can get a lot of fun out of it?”

Everyone looked rather blank and amazed, except the Story Girl. She knew what she had to do, and she did it.

“What a silly idea!” she exclaimed, with a contemptuous toss of her long brown curls. “Just as if WE could get up a newspaper!”

Felicity fired up, exactly as we had hoped.

“I think it’s a splendid idea,” she said enthusiastically. “I’d like to know why we couldn’t get up as good a newspaper as they have in town! Uncle Roger says the Daily Enterprise has gone to the dogs–all the news it prints is that some old woman has put a shawl on her head and gone across the road to have tea with another old woman. I guess we could do better than that. You needn’t think, Sara Stanley, that nobody but you can do anything.”

“I think it would be great fun,” said Peter decidedly. “My Aunt Jane helped edit a paper when she was at Queen’s Academy, and she said it was very amusing and helped her a great deal.”

The Story Girl could hide her delight only by dropping her eyes and frowning.

“Bev wants to be editor,” she said, “and I don’t see how he can, with no experience. Anyhow, it would be a lot of trouble.”

“Some people are so afraid of a little bother,” retorted Felicity.

“I think it would be nice,” said Cecily timidly, “and none of us have any experience of being editors, any more than Bev, so that wouldn’t matter.”

“Will it be printed?” asked Dan.

“Oh, no,” I said. “We can’t have it printed. We’ll just have to write it out–we can buy foolscap from the teacher.”

“I don’t think it will be much of a newspaper if it isn’t printed,” said Dan scornfully.

“It doesn’t matter very much what YOU think,” said Felicity.

“Of course,” said the Story Girl hastily, not wishing to have Dan turned against our project, “if all the rest of you want it I’ll go in for it too. I daresay it would be real good fun, now that I come to think of it. And we’ll keep the copies, and when we become famous they’ll be quite valuable.”

“I wonder if any of us ever will be famous,” said Felix.

“I don’t see how she can be,” said Felicity skeptically. “Why, she’s just one of us.”

“Well, it’s decided, then, that we’re to have a newspaper,” I resumed briskly. “The next thing is to choose a name for it. That’s a very important thing.”

“How often are you going to publish it?” asked Felix.

“I thought newspapers came out every day, or every week at least,” said Dan.

“We couldn’t have one every week,” I explained. “It would be too much work.”

“Well, that’s an argument,” admitted Dan. “The less work you can get along with the better, in my opinion. No, Felicity, you needn’t say it. I know exactly what you want to say, so save your breath to cool your porridge. I agree with you that I never work if I can find anything else to do.”