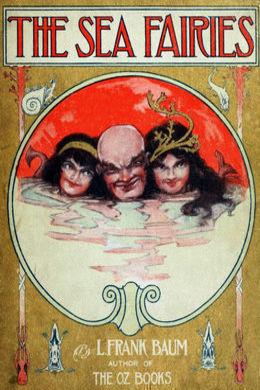 Enchanting fantasy by creator of beloved “Oz” stories whisks young readers away on an exciting underwater adventure where they meet a school of beguiling mermaids, an aristocratic codfish and a bashful octopus, attend an elegant banquet, confront an awesome sea monster, and much more.

“Nobody,” said Cap’n Bill solemnly, “ever sawr a mermaid an’ lived to tell the tale.”

“Why not?” asked Trot, looking earnestly up into the old sailor’s face.

They were seated on a bench built around a giant acacia tree that grew just at the edge of the bluff. Below them rolled the blue waves of the great Pacific. A little way behind them was the house, a neat frame cottage painted white and surrounded by huge eucalyptus and pepper trees. Still farther behind that—a quarter of a mile distant but built upon a bend of the coast—was the village, overlooking a pretty bay.

Cap’n Bill and Trot came often to this tree to sit and watch the ocean below them. The sailor man had one “meat leg” and one “hickory leg,” and he often said the wooden one was the best of the two. Once Cap’n Bill had commanded and owned the “Anemone,” a trading schooner that plied along the coast; and in those days Charlie Griffiths, who was Trot’s father, had been the Captain’s mate. But ever since Cap’n Bill’s accident, when he lost his leg, Charlie Griffiths had been the captain of the little schooner while his old master lived peacefully ashore with the Griffiths family.

This was about the time Trot was born, and the old sailor became very fond of the baby girl. Her real name was Mayre, but when she grew big enough to walk, she took so many busy little steps every day that both her mother and Cap’n Bill nicknamed her “Trot,” and so she was thereafter mostly called.

It was the old sailor who taught the child to love the sea, to love it almost as much as he and her father did, and these two, who represented the “beginning and the end of life,” became firm friends and constant companions.

“Why hasn’t anybody seen a mermaid and lived?” asked Trot again.

“‘Cause mermaids is fairies, an’ ain’t meant to be seen by us mortal folk,” replied Cap’n Bill.

“Then,” he answered, slowly wagging his head, “the mermaids give ‘em a smile an’ a wink, an’ they dive into the water an’ gets drownded.”

“That don’t make any diff’rence, Trot. The mermaids live deep down, an’ the poor mortals never come up again.”

The little girl was thoughtful for a moment. “But why do folks dive in the water when the mermaids smile an’ wink?” she asked.

“Mermaids,” he said gravely, “is the most beautiful creatures in the world—or the water, either. You know what they’re like, Trot, they’s got a lovely lady’s form down to the waist, an’ then the other half of ‘em’s a fish, with green an’ purple an’ pink scales all down it.”

“‘Course, Trot; arms like any other lady. An’ pretty faces that smile an’ look mighty sweet an’ fetchin’. Their hair is long an’ soft an’ silky, an’ floats all around ‘em in the water. When they comes up atop the waves, they wring the water out’n their hair and sing songs that go right to your heart. If anybody is unlucky enough to be ‘round jes’ then, the beauty o’ them mermaids an’ their sweet songs charm ‘em like magic; so’s they plunge into the waves to get to the mermaids. But the mermaids haven’t any hearts, Trot, no more’n a fish has; so they laughs when the poor people drown an’ don’t care a fig. That’s why I says, an’ I says it true, that nobody never sawr a mermaid an’ lived to tell the tale.”

“Then how do you know, Cap’n Bill?” asked the little girl, looking up into his face with big, round eyes.

Cap’n Bill coughed. Then he tried to sneeze, to gain time. Then he took out his red cotton handkerchief and wiped his bald head with it, rubbing hard so as to make him think clearer. “Look, Trot; ain’t that a brig out there?” he inquired, pointing to a sail far out in the sea.

“How does anybody know about mermaids if those who have seen them never lived to tell about them?” she asked again.

“About their green and pink scales and pretty songs and wet hair.”

“They don’t know, I guess. But mermaids jes’ natcherly has to be like that, or they wouldn’t be mermaids.”

She thought this over. “Somebody MUST have lived, Cap’n Bill,” she declared positively. “Other fairies have been seen by mortals; why not mermaids?”

“P’raps they have, Trot, p’raps they have,” he answered musingly. “I’m tellin’ you as it was told to me, but I never stopped to inquire into the matter so close before. Seems like folks wouldn’t know so much about mermaids if they hadn’t seen ‘em; an’ yet accordin’ to all accounts the victim is bound to get drownded.”

“P’raps,” suggested Trot softly, “someone found a fotygraph of one of ‘em.”

A nice man was Cap’n Bill, and Trot knew he always liked to explain everything so she could fully understand it.