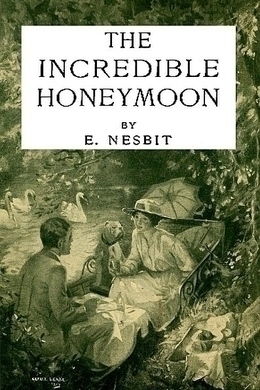 The incredible honeymoon is a story about a man who feels the nothing ever happens to him, and that adventures are things in story books. That is until he comes in to money and decided to leave behind his conventional life and to go and have adventures. He sets out to tramp about, spending his money how he chooses to make other people happy, then a chance encounter sends him on an adventure with a young girl that changes both their lives.(

To understand this story you will have to believe in the Greater Gods–Love and Youth, for example, and Adventure and Coincidence; also in the trusting heart of woman and the deceitful spirit of man. You will have to reconcile yourself to the fact that though daily you go to London by the nine-seven, returning by the five-fifteen, and have your accustomed meals at eight, one, and half-past six, there are those who take neither trains nor meals regularly. That, while nothing on earth ever happens to you, there really are on earth people to whom things do happen. Nor is the possibility of such happenings wholly a matter of the independent income–the income for which you do not work. It is a matter of the individual soul. I knew a man whose parents had placed him in that paralyzing sort of situation which is symbolized by the regular trains and the regular meals. It was quite a nice situation for some people, a situation, too, in which one was certain to “get on.” But the man I knew had other dreams. He chucked his job, one fine Saturday morning in May, went for a long walk, met a tinker and bought his outfit–a wheel on wheels, a sort of barrow with a grindstone on it, and a pot for putting fire in dangling underneath. This he wheeled profitably through rural districts–so profitably that he was presently able to buy a donkey and a cart, and to sell kettles as well as mend them. He has since bought a gipsy tent; with these impediments–or helps–he travels through the pleasant country. Things are always happening to him. He has found a buried treasure; frustrated a burglary; once he rescued a lady in distress; and another time he killed a man. The background to these dramatic incidents is always the pleasant background of quiet road, blossoming hedgerows and orchards, corn-fields and meadows and lanes. He says this is the way to live. I will write down his story some day, but this is not it. I only bring him in to illustrate my point, which is that adventures do happen–to the adventurous.

My friend the tinker has had, perhaps, more than his share of adventures, but then his is the temperament that shoots, like a willing needle, to the great magnet of melodrama. The temperamental needle of Edward Basingstoke followed the magnet of romance. In a gayer, if less comfortable, age he might have been a knight-errant, or, at least, the sympathetic squire of a knight-errant. Had he been born in the days when most people stayed at home and minded their own business he would have insisted on going out and minding other people’s. Living in the days of aeroplanes, motors, telegraphy, and cinematographs, in a world noisy with the nonsense of politics and the press, he told himself that the ideal life was the life of the farmer who plowed and sowed and reaped, tended his beasts and filled his barns, and went home from his clean, quiet work to the open hearth whence the wood smoke curled up to heaven like the smoke of an altar.

Destiny, in deep perversity, was making an engineer of him. He dreamed his pastoral dreams in the deafening clangor of the shops at Crewe, but not ten thousand hammers could beat out of his brain the faith that life was really–little as one might suppose it, just looking at it from Crewe–full of the most beautiful and delicate possibilities, and that, somehow or other, people got from life what they chose to take. While he was making up his mind what he should take, he went on learning his trade. And Destiny seemed determined that he should learn nothing else. What we call Destiny is really Chance–and so far from being immutable, she is the veriest flirt and weathercock. She changed her mind about Edward–or perhaps Death, who is stronger than she, insisted and prevailed.

Just at the time when a faint dust was beginning to settle on his dreams–the sort of dust that thickens and hardens into clay and you grow cabbages in it–Death intervened to save him. It was his uncle who died, and he left a will, and by that will certain property came to Edward. When the news came he took a day to think of it, and he went to the works as usual that afternoon and the next morning. But next day at noon he laid down his tools and never took them up again. Instead he took a ticket to Oxford, appeared at the rooms of his friend, whom he surprised in slumber, and told his tale.

“And you’re going to chuck the shop,” said the friend, whose name was Vernon Martingale, and his father a baronet.

“I have chucked the shop,” said Edward. “I chucked it at Fate as you might throw a stone at a dog. And that reminds me–I want a dog. Do you know of a nice dog–intelligent, good manners, self-respecting, and worthy?”

“Certainly not. These researches into family history are in the worst possible taste. You don’t love me for my pedigree. Why should I love my dog for his?”

“I suppose you want some tea, anyhow,” said Martingale.

So they had tea, and talked cricket.