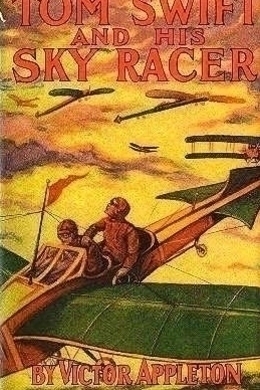 Tom Swift and His Sky Racer

The Quickest Flight on Record

A $10,000 prize lures Tom into competing at a local aviation meet at Eagle Park. Tom is determined to build the fastest plane around, but his plans mysteriously disappear, which means Tom must redesign his new airplane from the beginning. A side-plot through the story is Mr. Swift’s failing health. (source: Wikipedia)

“Is this Tom Swift, the inventor of several airships?”

The man who had rung the bell glanced at the youth who answered his summons.

“I do. I’m Mr. James Gunmore, secretary of the Eagle Park Aviation Association. I had some correspondence with you about a prize contest we are going to hold. I believe–”

“Oh, yes, I remember now,” and the young inventor smiled pleasantly as he opened wider the door of his home. “Won’t you come in? My father will be glad to see you. He is as much interested in airships as I am.” And Tom led the way to the library, where the secretary of the aviation society was soon seated in a big, comfortable leather chair.

“I thought we could do better, and perhaps come to some decision more quickly, if I came to see you, than if we corresponded,” went on Mr. Gunmore. “I hope I haven’t disturbed you at any of your inventions,” and the secretary smiled at the youth.

“No. I’m through for to-day,” replied Tom. “I’m glad to see you. I thought at first it was my chum, Ned Newton. He generally runs over in the evening.”

“Our society, as I wrote you, Mr. Swift, is planning to hold a very large and important aviation meet at Eagle Park, which is a suburb of Westville, New York State. We expect to have all the prominent ‘bird-men’ there, to compete for prizes, and your name was mentioned. I wrote to you, as you doubtless recall, asking if you did not care to enter.”

“And I think I wrote you that my big aeroplane-dirigible, the Red Cloud, was destroyed in Alaska, during a recent trip we made to the caves of ice there, after gold,” replied Tom.

“Yes, you did,” admitted Mr. Gunmore, “and while our committee was very sorry to hear that, we hoped you might have some other air craft that you could enter at our meet. We want to make it as complete as possible, and we all feel that it would not be so unless we had a Swift aeroplane there.”

“It’s very kind of you to say so,” remarked Tom, “but since my big craft was destroyed I really have nothing I could enter.”

“Haven’t you an aeroplane of any kind? I made this trip especially to get you to enter. Haven’t you anything in which you could compete for the prizes? There are several to be offered, some for distance flights, some for altitude, and the largest, ten thousand dollars, for the speediest craft. Ten thousand dollars is the grand prize, to be awarded for the quickest flight on record.”

“I surely would like to try for that,” said Tom, “but the only craft I have is a small monoplane, the Butterfly, I call it, and while it is very speedy, there have been such advances made in aeroplane construction since I made mine that I fear I would be distanced if I raced in her. And I wouldn’t like that.”

“No,” agreed Mr. Gunmore. “I suppose not. Still, I do wish we could induce you to enter. I don’t mind telling you that we consider you a drawing-card. Can’t we induce you, some way?”

“I’m afraid not. I haven’t any machine which–”

“Look here!” exclaimed the secretary eagerly. “Why can’t you build a special aeroplane to enter in the next meet? You’ll have plenty of time, as it doesn’t come off for three months yet. We are only making the preliminary arrangements. It is now June, and the meet is scheduled for early in September. Couldn’t you build a new and speedy aeroplane in that time?”

Eagerly Mr. Gunmore waited for the answer. Tom Swift seemed to be considering it. There was an increased brightness to his eyes, and one could tell that he was thinking deeply. The secretary sought to clinch his argument.

“I believe, from what I have heard of your work in the past, that you could build an aeroplane which would win the ten-thousand-dollar prize,” he went on. “I would be very glad if you did win it, and, so I think, would be the gentlemen associated with me in this enterprise. It would be fine to have a New York State youth win the grand prize. Come, Tom Swift, build a special craft, and enter the contest!”

As he paused for an answer footsteps were heard coming along the hall, and a moment later an aged gentleman opened the door of the library.

“Don’t go, father,” said Tom. “You will be as much interested in this as I am. This is Mr. Gunmore, of the Eagle Park Aviation Association. This is my father, Mr. Gunmore.”

“I’ve heard of you,” spoke the secretary as he shook hands with the aged inventor. “You and your son have made, in aeronautics, a name to be proud of.”

“And he wants us to go still farther, dad,” broke in the youth. “He wants me to build a specially speedy aeroplane, and race for ten thousand dollars.”

“Hum!” mused Mr. Swift. “Well, are you going to do it, Tom? Seems to me you ought to take a rest. You haven’t been back from your gold-hunting trip to Alaska long enough to more than catch your breath, and now–”