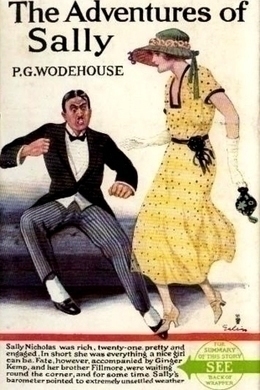 The Adventures of Sally

When Sally Nicholas became an heiress, she had to cope her brother’s wild theatrical ambitions and the defection of her fiance, his replacement being a strangely unattractive suitor. A trip to England only made things worse, but then a piece of speculation might just offer a happy ending.

Sally looked contentedly down the long table. She felt happy at last. Everybody was talking and laughing now, and her party, rallying after an uncertain start, was plainly the success she had hoped it would be. The first atmosphere of uncomfortable restraint, caused, she was only too well aware, by her brother Fillmore’s white evening waistcoat, had worn off; and the male and female patrons of Mrs. Meecher’s select boarding-house (transient and residential) were themselves again.

At her end of the table the conversation had turned once more to the great vital topic of Sally’s legacy and what she ought to do with it. The next best thing to having money of one’s own, is to dictate the spending of somebody else’s, and Sally’s guests were finding a good deal of satisfaction in arranging a Budget for her. Rumour having put the sum at their disposal at a high figure, their suggestions had certain spaciousness.

“Let me tell you,” said Augustus Bartlett, briskly, “what I’d do, if I were you.” Augustus Bartlett, who occupied an intensely subordinate position in the firm of Kahn, Morris and Brown, the Wall Street brokers, always affected a brisk, incisive style of speech, as befitted a man in close touch with the great ones of Finance. “I’d sink a couple of hundred thousand in some good, safe bond-issue–we’ve just put one out which you would do well to consider–and play about with the rest. When I say play about, I mean have a flutter in anything good that crops up. Multiple Steel’s worth looking at. They tell me it’ll be up to a hundred and fifty before next Saturday.”

Elsa Doland, the pretty girl with the big eyes who sat on Mr. Bartlett’s left, had other views.

“Buy a theatre. Sally, and put on good stuff.”

“And lose every bean you’ve got,” said a mild young man, with a deep voice across the table. “If I had a few hundred thousand,” said the mild young man, “I’d put every cent of it on Benny Whistler for the heavyweight championship. I’ve private information that Battling Tuke has been got at and means to lie down in the seventh…”

“Say, listen,” interrupted another voice, “lemme tell you what I’d do with four hundred thousand…”

“If I had four hundred thousand,” said Elsa Doland, “I know what would be the first thing I’d do.”

“Pay my bill for last week, due this morning.”

Sally got up quickly, and flitting down the table, put her arm round her friend’s shoulder and whispered in her ear:

“Elsa darling, are you really broke? If you are, you know, I’ll…”

“You’re an angel, Sally. There’s no one like you. You’d give your last cent to anyone. Of course I’m not broke. I’ve just come back from the road, and I’ve saved a fortune. I only said that to draw you.”

Sally returned to her seat, relieved, and found that the company had now divided itself into two schools of thought. The conservative and prudent element, led by Augustus Bartlett, had definitely decided on three hundred thousand in Liberty Bonds and the rest in some safe real estate; while the smaller, more sporting section, impressed by the mild young man’s inside information, had already placed Sally’s money on Benny Whistler, doling it out cautiously in small sums so as not to spoil the market. And so solid, it seemed, was Mr. Tuke’s reputation with those in the inner circle of knowledge that the mild young man was confident that, if you went about the matter cannily and without precipitation, three to one might be obtained. It seemed to Sally that the time had come to correct certain misapprehensions.

“I don’t know where you get your figures,” she said, “but I’m afraid they’re wrong. I’ve just twenty-five thousand dollars.”

The statement had a chilling effect. To these jugglers with half-millions the amount mentioned seemed for the moment almost too small to bother about. It was the sort of sum which they had been mentally setting aside for the heiress’s car fare. Then they managed to adjust their minds to it. After all, one could do something even with a pittance like twenty-five thousand.

“If I had twenty-five thousand…” began Elsa Doland.

“If I’d had twenty-five thousand in the year nineteen hundred,” observed a gloomy-looking man with spectacles, “I could have started a revolution in Paraguay.”

“Well, I’ll tell you exactly what I’m going to do,” said Sally. “I’m going to start with a trip to Europe…France, specially. I’ve heard France well spoken of–as soon as I can get my passport; and after I’ve loafed there for a few weeks, I’m coming back to look about and find some nice cosy little business which will let me put money into it and keep me in luxury. Are there any complaints?”

“Even a couple of thousand on Benny Whistler…” said the mild young man.