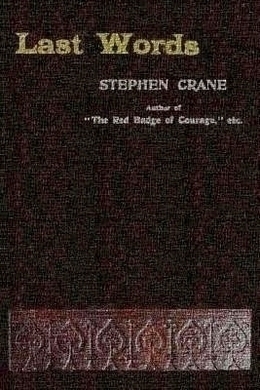 Remarkably prolific writer Stephen Crane died of tuberculosis at the tender age of 28. But in the years before his premature demise, Crane exerted a profound influence on American literature that would resonate for decades after his death. The posthumous collection Last Words brings together a series of stories, essays, sketches, and other short pieces that were among Crane’s final works.

“Well, I know I’m not handsome,” said one gloomily. He was poking holes in the sand with a discontented cane.

The companion was watching the waves play. He seemed overcome with perspiring discomfort as a man who is resolved to set another man right.

Suddenly his mouth turned into a straight line. “To be sure you are not,” he cried vehemently. “You look like thunder. I do not desire to be unpleasant, but I must assure you that your freckled skin continually reminds spectators of white wall paper with gilt roses on it. The top of your head looks like a little wooden plate. And your figure–heavens!”

For a time they were silent. They stared at the waves that purred near their feet like sleepy sea-kittens.

“What of it,” exploded the other. “Why, it means that you’d look like blazes in a bathing-suit.”

They were again silent. The freckled man seemed ashamed. His tall companion glowered at the scenery.

“I am decided,” said the freckled man suddenly. He got boldly up from the sand and strode away. The tall man followed, walking sarcastically and glaring down at the round, resolute figure before him.

A bath-clerk was looking at the world with superior eyes through a hole in a board. To him the freckled man made application, waving his hands over his person in illustration of a snug fit. The bath-clerk thought profoundly. Eventually, he handed out a blue bundle with an air of having phenomenally solved the freckled man’s dimensions.

The latter resumed his resolute stride.

“See here,” said the tall man, following him, “I bet you’ve got a regular toga, you know. That fellow couldn’t tell–”

“Yes, he could,” interrupted the freckled man, “I saw correct mathematics in his eyes.”

“Tom,” again interrupted the other, “produce your proud clothes and we’ll go in.”

The tall man swore bitterly. He went to one of a row of little wooden boxes and shut himself in it. His companion repaired to a similar box.

At first he felt like an opulent monk in a too-small cell, and he turned round two or three times to see if he could. He arrived finally into his bathing-dress. Immediately he dropped gasping upon a three-cornered bench. The suit fell in folds about his reclining form. There was silence, save for the caressing calls of the waves without.

Then he heard two shoes drop on the floor in one of the little coops. He began to clamour at the boards like a penitent at an unforgiving door.

A voice of wrath, muffled by cloth, came through the walls. “You go t’ blazes!”

The freckled man began to groan, taking the occupants of the entire row of coops into his confidence.

“Stop your noise,” angrily cried the tall man from his hidden den. “You rented the bathing-suit, didn’t you? Then–”

The tall man came out of his box. His suit looked like blue skin. He walked with grandeur down the alley between the rows of coops. Stopping in front of his friend’s door, he rapped on it with passionate knuckles.

“Come out of there, y’ ol’ fool,” said he, in an enraged whisper. “It’s only your accursed vanity. Wear it anyhow. What difference does it make? I never saw such a vain ol’ idiot!”

As he was storming the door opened, and his friend confronted him. The tall man’s legs gave way, and he fell against the opposite door.

The freckled man regarded him sternly.

His back curved in scorn. He walked majestically down the alley. There was pride in the way his chubby feet patted the boards. The tall man followed, weakly, his eyes riveted upon the figure ahead.

As a disguise the freckled man had adopted the stomach of importance. He moved with an air of some sort of procession, across a board walk, down some steps, and out upon the sand.

There was a pug dog and three old women on a bench, a man and a maid with a book and a parasol, a seagull drifting high in the wind, and a distant, tremendous meeting of sea and sky. Down on the wet sand stood a girl being wooed by the breakers.

The freckled man moved with stately tread along the beach. The tall man, numb with amazement, came in the rear. They neared the girl.

Suddenly the tall man was seized with convulsions. He laughed, and the girl turned her head.

She perceived the freckled man in the bathing-suit. An expression of wonderment overspread her charming face. It changed in a moment to a pearly smile.