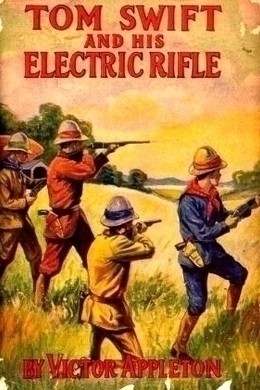 Tom Swift and His Electric Rifle

Tom is daydreaming of African Safaris while test-firing his new Electric Rifle. It works too well and toasts a hole in his neighbor’s dining room wall, prompting an outraged visit from the toastee-in-question. A quick application of cash settles ruffled feathers, and some unspecified safety features are added to the weapon, to prevent a recurrence of the accident. As luck would have it, a famous African Safari Master is in town, shopping for a new big game rifle. He hooks up with Tom and a new custom-built airship, the Black Hawk, is designed & constructed. Tom, Ned, Mr. Damon and the hunter, Mr. Durban, are off to the Dark Continent via steamship, in search of ivory and adventure. Danger encroaches at every turn, and Tom gets to use his new weapon to slay an amazing variety of beasts that swim, crawl, and stampede around him. Needless to say, the rifle is effective on smaller but no less dangerous creatures, too, and does fearful duty when the group is attacked by savage tribesmen. You can probably guess the outcome, but you’ll have to read the story to be sure.

“Have you anything special to do to-night, Ned?” asked Tom Swift, the well-known inventor, as he paused in front of his chum’s window, in the Shopton National Bank.

“No, nothing in particular,” replied the bank clerk, as he stacked up some bundles of bills. “Why do you ask?”

“I wanted you to come over to the house for a while.”

“Going to have a surprise party, or something like that?”

“No, only I’ve got something I’d like to show you.”

“Well, not exactly new. You’ve seen it before, but not since I’ve improved it. I’m speaking of my new electric rifle. I’ve got it ready to try, now, and I’d like to see what you think of it. There’s a rifle range over at the house, and we can practice some shooting, if you haven’t anything else to do.”

“I haven’t, and I’ll be glad to come. What are you doing in the bank, anyhow; putting away more of your wealth, Tom?”

“Yes, I just made a little deposit. It’s some money I got from the government for the patents on my sky racer, and I’m salting it down here until Dad and I can think of a better investment.”

“Good idea. Bring us all the money you can,” and the bank clerk, who held a small amount of stock in the financial institution, laughed, his chum joining in with him.

“Well, then. I’ll expect you over this evening,” went on the youthful inventor, as he turned to leave the bank.

“Yes, I’ll be there. Say, Tom, have you heard the latest about Andy Foger?”

“No, I haven’t heard much since he left town right after I beat him in the aeroplane race at Eagle Park.”

“Well, he’s out of town all right, and I guess for a long time this trip. He’s gone to Europe.”

“To Europe, eh? Well, he threatened to go there after he failed to beat me in the race, but I thought he was only bluffing.”

“Well, I, for one, am glad of it. Did he take his aeroplane along?”

“Yes, that’s what he went for. It seems that this Mr. Landbacher, the German who really invented it, and built it with money which Mr. Foger supplied, has an idea he can interest the German or some other European government in the machine. Andy wanted to go along with him, and as Mr. Foger financed the scheme, I guess he thought it would be a good thing to have some one represent him. So Andy’s gone.”

“Then he won’t bother me. Well, I must get along. I’ll expect you over to-night,” and with a wave of his hand Tom Swift hurried from the bank.

The young inventor jumped into his electric runabout which stood outside the institution, and was about to start off when he saw a newsboy selling papers which had just come in from New York, on the morning train.

“Here, Jack, give me a TIMES,” called Tom to the lad, and he tossed the newsboy a nickel. Then, after glancing at the front page, and noting the headings, Tom started off his speedy car, in which, on one occasion, he had made a great run, against time. He was soon at home.

“Well, Dad, I’ve got the money safely put away,” he remarked to an aged gentleman who sat in the library reading a book. “Now we won’t have to worry about thieves until we get some more cash in.”

“Well, I’m glad it’s coming in so plentifully,” said Mr. Swift with a smile. “Since my illness I haven’t been able to do much, Tom, and it all depends on you, now.”

“Don’t let that worry you, Dad. You’ll soon be as busy as ever,” for, following a serious operation for an ailment of the heart, Mr. Swift, who was a veteran inventor, had not been able to do much. But the devices of his son, especially a speedy monoplane, which Tom invented, and sold to the United States Government, were now bringing them in a large income. In fact with royalties from his inventions and some gold and diamonds which he had secured on two perilous trips, Tom Swift was quite wealthy.

“I’ll never be as busy as I once was,” went on Mr. Swift, a little regretfully, “but I don’t know that I care as long as you continue to turn out new machines, Tom. By the way, how is the electric rifle coming on? I haven’t heard you speak of it lately.”

“It’s practically finished, Dad. It worked pretty well the time I took it when we went on the trip to the caves of ice, but I’ve improved it very much since then. In fact I’m going to give it a severe test to-night. Ned Newton is coming over, and it may be that then we’ll find out something about it that could be bettered. But I think not. It suits me as it is.”

“So Ned is coming over to see it; eh? You ought to have Mr. Damon here to bless it a few times.”

“Yes, I wish I did. And he may come along at any moment, as it is. You never can tell when he is going to turn up. Mrs. Baggert says you were out walking while I was at the bank, Dad. Do you feel better after it?”

“Yes, I think I do, Tom. Oh, I’m growing stronger every day, but it will take time. But now tell me something about the electric gun.”