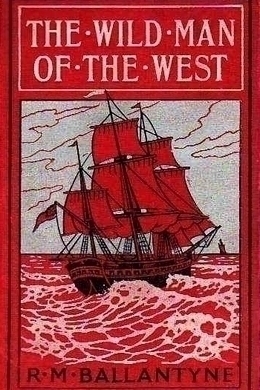 The Wild Man of the West

A Tale of the Rocky Mountains

While Gibault was gazing at this scene with mingled feelings of anxiety, rage, and horror, the whole band of Indians suddenly sprang to their feet and seized their weapons. Almost at the same moment Bounce strode into the circle of light and deposited his cask on the ground. Then, making signs of peace, he advanced towards one of the Indians, who, from his dress and appearance, seemed to be the chief, and presented him with a piece of tobacco. The chief accepted the gift in silence.

March Marston was mad! The exact state of madness to which March had attained at the age when we take up his personal history–namely, sixteen–is uncertain, for the people of the backwoods settlement in which he dwelt differed in their opinions on that point.

The clergyman, who was a Wesleyan, said he was as wild as a young buffalo bull; but the manner in which he said so led his hearers to conclude that he did not think such a state of ungovernable madness to be a hopeless condition, by any means. The doctor said he was as mad as a hatter; but this was an indefinite remark, worthy of a doctor who had never obtained a diploma, and required explanation, inasmuch as it was impossible to know how mad he considered a hatter to be. Some of the trappers who came to the settlement for powder and lead, said he was as mad as a grisly bear with a whooping-cough–a remark which, if true, might tend to throw light on the diseases to which the grisly bear is liable, but which failed to indicate to any one, except perhaps trappers, the extent of young Marston’s madness. The carpenter and the blacksmith of the place–who were fast friends and had a pitched battle only once a month, or twice at most–agreed in saying that he was as mad as a wild-cat. In short, every one asserted stoutly that the boy was mad, with the exception of the women of the settlement, who thought him a fine, bold, handsome fellow; and his own mother, who thought him a paragon of perfection, and who held the opinion (privately) that, in the wide range of the habitable globe there was not another like him–and she was not far wrong!

Now, the whole and sole reason why March Marston was thus deemed a madman, was that he displayed an insane tendency, at all times and in all manners, to break his own neck, or to make away with himself in some similarly violent and uncomfortable manner.

But for all this March had not a single enemy. He did his companions many a kind turn; never an unkind one. He fought for love, not for hatred. He loved a dog–if any one kicked it, he fought him. He loved a little boy–if any one was cruel to that little boy, he fought him. He loved fair play–if any one was guilty of foul play, he fought him. When he was guilty of foul play himself (as was sometimes the case, for who is perfect?) he felt inclined to jump out of his own body and turn about and thrash himself! And he would have done so often, had it been practicable. Yes, there is no doubt whatever about it March Marston was mad–as mad, after a fashion, as any creature, human or otherwise, you choose to name.

Young Marston’s mother was a handsome, stout, blue-eyed, flaxen-haired woman, of a little over thirty-five summers. She was an English emigrant, and had, seventeen years before the time we write of settled at Pine Point, on the banks of the Yellowstone River, along with her brother, the blacksmith above referred to. At that time she was the sweetest maiden in all the village, and now she was the handsomest matron. Indeed, the bloom of her youth remained on her cheeks so little impaired that she was often mistaken by strangers for March Marston’s elder sister. The men of the place called her pretty widow Marston; but she was not a widow–at least, they had as little ground for saying that she was as they had for asserting that her son was mad. Mrs Marston was peculiarly circumstanced, but she was not a widow.

The peculiar circumstances connected with her history are soon told. Immediately after the arrival of the blacksmith and his pretty sister at Pine Point settlement, a tall stout young stripling–a trapper–about a year older than herself, fell deeply in love with Mary West–that being Mrs Marston’s maiden name. The young trapper’s case was desperate. He sank at once so deep into the profundities of love, that no deep-sea lead, however ingeniously contrived, could reach him.