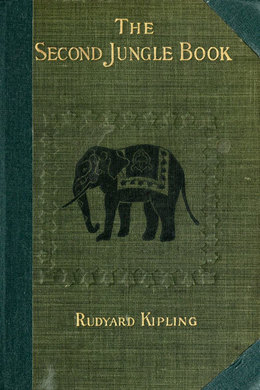 Mowgli was once the little man-cub raised by Mother Wolf. Now Mowgli is the Jungle Lord ruling over the elephant and the panther, the python and the crocodile. All obey him and he fears no one….not even Man. The Second Jungle Book tells of the further adventures of Mowgli, the boy raised by wolves in the jungle. Through his cunning and fearlessness, Mowgli earns the respect of the animals of the jungle. He leads his wolf-brothers into battle against a threatening pack of red dogs. And when Mowgli’s human parents are persecuted by a violent group of villagers, he comes to their aid. This is the story of how Mowgli must come face-to-face with himself as a man and decide whether he will leave his jungle kingdom to join the society of man.

You will remember, if you have read the tales in the first Jungle Book, that, after Mowgli had pinned Shere Khan’s hide to the Council Rock, he told as many as were left of the Seeonee Pack that henceforward he would hunt in the Jungle alone; and the four children of Mother and Father Wolf said that they would hunt with him. But it is not easy to change one’s life all in a minute–particularly in the Jungle. The first thing Mowgli did, when the disorderly Pack had slunk off, was to go to the home-cave, and sleep for a day and a night. Then he told Mother Wolf and Father Wolf as much as they could understand of his adventures among men; and when he made the morning sun flicker up and down the blade of his skinning-knife,–the same he had skinned Shere Khan with,–they said he had learned something. Then Akela and Gray Brother had to explain their share of the great buffalo-drive in the ravine, and Baloo toiled up the hill to hear all about it, and Bagheera scratched himself all over with pure delight at the way in which Mowgli had managed his war.

It was long after sunrise, but no one dreamed of going to sleep, and from time to time, during the talk, Mother Wolf would throw up her head, and sniff a deep snuff of satisfaction as the wind brought her the smell of the tiger-skin on the Council Rock.

“But for Akela and Gray Brother here,” Mowgli said, at the end, “I could have done nothing. Oh, mother, mother! if thou hadst seen the black herd-bulls pour down the ravine, or hurry through the gates when the Man-Pack flung stones at me!”

“Peace, peace, Raksha!” said Father Wolf, lazily. “Our Frog has come back again–so wise that his own father must lick his feet; and what is a cut, more or less, on the head? Leave Men alone.” Baloo and Bagheera both echoed: “Leave Men alone.”

Mowgli, his head on Mother Wolf’s side, smiled contentedly, and said that, for his own part, he never wished to see, or hear, or smell Man again.

“But what,” said Akela, cocking one ear–“but what if men do not leave thee alone, Little Brother?”

“We be five,” said Gray Brother, looking round at the company, and snapping his jaws on the last word.

“We also might attend to that hunting,” said Bagheera, with a little switch-switch of his tail, looking at Baloo. “But why think of men now, Akela?”

“For this reason,” the Lone Wolf answered: “when that yellow thief’s hide was hung up on the rock, I went back along our trail to the village, stepping in my tracks, turning aside, and lying down, to make a mixed trail in case one should follow us. But when I had fouled the trail so that I myself hardly knew it again, Mang, the Bat, came hawking between the trees, and hung up above me. Said Mang, ‘The village of the Man-Pack, where they cast out the Man-cub, hums like a hornet’s nest.’”

“It was a big stone that I threw,” chuckled Mowgli, who had often amused himself by throwing ripe paw-paws into a hornet’s nest, and racing off to the nearest pool before the hornets caught him.

“I asked of Mang what he had seen. He said the Red Flower blossomed at the gate of the village, and men sat about it carrying guns. Now I know, for I have good cause,”–Akela looked down at the old dry scars on his flank and side,–“that men do not carry guns for pleasure. Presently, Little Brother, a man with a gun follows our trail–if, indeed, he be not already on it.”

“But why should he? Men have cast me out. What more do they need?” said Mowgli, angrily.

“Thou art a man, Little Brother,” Akela returned. “It is not for us, the Free Hunters, to tell thee what thy brethren do, or why.”

He had just time to snatch up his paw as the skinning-knife cut deep into the ground below. Mowgli struck quicker than an average human eye could follow, but Akela was a wolf; and even a dog, who is very far removed from the wild wolf, his ancestor, can be waked out of deep sleep by a cart-wheel touching his flank, and can spring away unharmed before that wheel comes on.

“Another time,” Mowgli said quietly, returning the knife to its sheath, “speak of the Man-Pack and of Mowgli in two breaths–not one.”