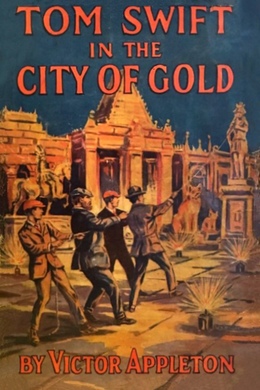 Tom Swift in the City of Gold

High-spirited young Tom Swift is off on another of his many exciting adventures. This time he’s in search of gold in an underground lost city. Tom finds the lost city in a remote area of Mexico, and he finds the gold. Getting into the city was difficult for the adventurers, but when they try to get out, then their real adventure begins. Tom and his companions find themselves trapped in an underground city which contains as many traps and mazes as an Egyptian pyramid.

“Letter for you, Tom Swift.”

“Ah, thanks, Mr. Wilson. This is the first mail I’ve had this week. You’ve been neglecting me,” and the young inventor took the missive which the Shopton postman handed to him over the gate, against which Tom was leaning one fine, warm Spring day.

“Well, I get around as often as I can, Tom. You’re not home a great deal, you know. When you’re not off in your sky racer seeing how much you can beat the birds, you’re either hunting elephants in Africa, or diving down under the ocean, or out in a diamond mine, or some such out-of-the-way place as that. No wonder you don’t get many letters. But that one looks as if it had come quite a distance.”

“So it does,” agreed Tom, looking closely at the stamp and postmark. “What do you make out of it, Mr. Wilson?” and then, just as many other persons do when getting a strange letter, instead of opening it to see from whom it has come, Tom tried to guess by looking at the handwriting, and trying to decipher the faint postmark. “What does that say?” and the young inventor pointed to the black stamp.

“Hum, looks like Jube–no, that first letter’s a ‘K’ I guess,” and Mr. Wilson turned it upside down, thinking that would help.

“Well, where, for the love of my old geography, is Gumba Twamba?” asked the lad with a laugh.

“You’ve got me, Tom. Must be in Sweden, or Holland, or some of those foreign countries. I don’t often handle letters from there, so I can’t say. Why don’t you open your letter and find out who its from?”

“That’s what I ought to have done at first.” Quickly Tom ripped open the much worn and frayed envelope, through the cracks of which some parts of the letter already could be seen, showing that it had traveled many thousand miles before it got to the village of Shopton, in New York State.

“Well, I’ve got to be traveling on,” remarked the postman, as Tom started to read the mysterious letter. “I’m late as it is. You can tell me the news when I pass again, Tom.”

But the young inventor did not reply. He was too much engaged in reading the missive, for, no sooner had he perused the first few lines than his eyes began to open wide in wonder, and his manner plainly indicated his surprise. He read the letter once, and then over again, and when he had finished it a second time, he made a dash for the house.

“I say dad!” cried Tom. “This is great! Great news here! Where are you, dad? Say, Mrs. Baggert,” he called as he saw the motherly housekeeper, “where’s father? I’ve got great news for him? Where is he?”

“Out in the shop, I think. I believe Mr. Damon is with him.”

“And blessing everything as usual, from his hat to his shoe laces, I’ll wager,” murmured Tom as he made his way to the shop where his father, also an inventor like himself, spent much of his time. “Well, well, I’m glad Mr. Damon is here, for he’ll be interested in this.”

Tom fairly rushed into the building, much of the space of which, was taken up by machinery, queer tools and odd devices, many of them having to do with the manufacture of aeroplanes, for Tom had as many of them as some people have of automobiles.

“I say, dad!” cried Tom, waving the letter above his head, “what do you think of this? Listen to–”

“Easy there now, Tom! Easy, my boy, or you’ll oblige me to do all my work over again,” and an aged man, beside whom a younger one was standing, held up a hand of caution, while with the other hand he was adjusting some delicate piece of machinery.

“What are you doing?” demanded the son.

“Bless my scarf pin!” exclaimed the other man–Mr. Wakefield Damon–“Bless my rubbers, Tom Swift! What SHOULD your father be doing but inventing something new, as he always is. I guess he’s working on his new gyroscope, though it is only a guess, for he hasn’t said ten words to me since I came out to talk to him. But that’s like all inventors, they–”

“Say, can’t you listen to me for five minutes?” pleaded Tom. “I’ve got some great news–simply great, and your gyroscope can wait, dad. Listen to this letter,” and he prepared to read it.

“Mr. Jacob Illingway, the African missionary whom you and I rescued, together with his wife, from the red pygmies!” cried Tom. “Think of that! Of all persons to get a letter from, and SUCH a letter! SUCH news in it. Why, it’s simply great! You remember Mr. and Mrs. Illingway; don’t you Mr. Damon? How we went to Africa after elephant’s tusks, with Mr. Durban the hunter, and how we got the missionaries away from those little savages in my airship–don’t you remember?”