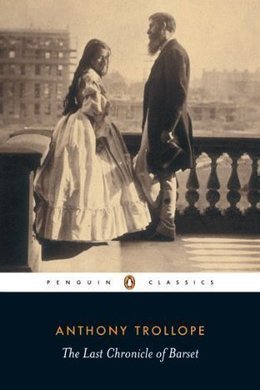 The Last Chronicle of Barset

Anthony Trollope was a masterful satirist with an unerring eye for the most intrinsic details of human behavior and an imaginative grasp of the preoccupations of nineteenth-century English novels. In The Last Chronicle of Barset, Mr. Crawley, curate of Hogglestock, falls deeply into debt, bringing suffering to himself and his family. To make matters worse, he is accused of theft, can’t remember where he got the counterfeit check he is alleged to have stolen, and must stand trial. Trollope’s powerful portrait of this complex man-gloomy, brooding, and proud, moving relentlessly from one humiliation to another-achieves tragic dimensions.

“I can never bring myself to believe it, John,” said Mary Walker, the pretty daughter of Mr. George Walker, attorney of Silverbridge. Walker and Winthrop was the name of the firm, and they were respectable people, who did all the solicitors’ business that had to be done in that part of Barsetshire on behalf of the Crown, were employed on the local business of the Duke of Omnium who is great in those parts, and altogether held their heads up high, as provincial lawyers often do. They,–the Walkers,–lived in a great brick house in the middle of the town, gave dinners, to which the county gentlemen not unfrequently condescended to come, and in a mild way led the fashion in Silverbridge. “I can never bring myself to believe it, John,” said Miss Walker.

“You’ll have to bring yourself to believe it,” said John, without taking his eyes from his book.

“A clergyman,–and such a clergyman too!”

“I don’t see that that has anything to do with it.” And as he now spoke, John did take his eyes off his book. “Why should not a clergyman turn thief as well as anybody else? You girls always seem to forget that clergymen are only men after all.”

“Their conduct is likely to be better than that of other men, I think.”

“I deny it utterly,” said John Walker. “I’ll undertake to say that at this moment there are more clergymen in debt in Barsetshire than there are either lawyers or doctors. This man has always been in debt. Since he has been in the county I don’t think he has ever been able to show his face in the High Street of Silverbridge.”

“John, that is saying more than you have a right to say,” said Mrs. Walker.

“Why, mother, this very cheque was given to a butcher who had threatened a few days before to post bills all about the county, giving an account of the debt that was due to him, if the money was not paid at once.”

“More shame for Mr. Fletcher,” said Mary. “He has made a fortune as butcher in Silverbridge.”

“What has that to do with it? Of course a man likes to have his money. He had written three times to the bishop, and he had sent a man over to Hogglestock to get his little bill settled six days running. You see he got it at last. Of course, a tradesman must look for his money.”

“Mamma, do you think that Mr. Crawley stole the cheque?” Mary, as she asked the question, came and stood over her mother, looking at her with anxious eyes.

“I would rather give no opinion, my dear.”

“But you must think something when everybody is talking about it, mamma.”

“Of course my mother thinks he did,” said John, going back to his book. “It is impossible that she should think otherwise.”

“That is not fair, John,” said Mrs. Walker; “and I won’t have you fabricate thoughts for me, or put the expression of them into my mouth. The whole affair is very painful, and as your father is engaged in the inquiry, I think that the less said about the matter in this house the better. I am sure that that would be your father’s feeling.”

“Of course I should say nothing about it before him,” said Mary. “I know that papa does not wish to have it talked about. But how is one to help thinking about such a thing? It would be so terrible for all of us who belong to the Church.”

“I do not see that at all,” said John. “Mr. Crawley is not more than any other man just because he’s a clergyman. I hate all that kind of clap-trap. There are a lot of people here in Silverbridge who think the matter shouldn’t be followed up, just because the man is in a position which makes the crime more criminal in him than it would be in another.”

“But I feel sure that Mr. Crawley has committed no crime at all,” said Mary.

“My dear,” said Mrs. Walker, “I have just said that I would rather you would not talk about it. Papa will be in directly.”

“Only! yes; just only!” said John. “She’d go on till dinner if any one would stay to hear her.”

“You’ve said twice as much as I have, John.” But John had left the room before his sister’s last words could reach him.

“You know, mamma, it is quite impossible not to help thinking of it,” said Mary.

“And when one knows the people it does make it so dreadful.”

“But do you know them? I never spoke to Mr. Crawley in my life, and I do not think I ever saw her.”

“Pity her! Pity is no word for it, mamma. My heart bleeds for them. And yet I do not believe for a moment that he stole the cheque. How can it be possible? For though he may have been in debt because they have been so very, very poor; yet we all know that he has been an excellent clergyman. When the Robartses were dining here last, I heard Mrs. Robarts say that for piety and devotion to his duties she had hardly ever seen any one equal to him. And the Robartses know more of them than anybody.”

“They say that the dean is his great friend.”