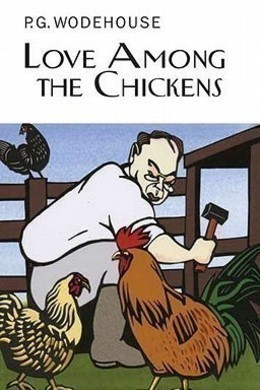 Love Among the Chickens

After seeing his friend Stanley Featherstonehaugh Ukridge for the first time in years, Jeremy Garnet is dragged along on holiday to Ukridge’s new chicken farm in Dorset. Hilarious situations abound with Garnet’s troublesome courting of a girl living nearby and the struggles on the farm, which are worsened by Ukridge’s bizarre business ideas and methods. This was Wodehouse’s first novel published in the United States, and the only one to feature the recurring character Stanley Featherstonehaugh Ukridge.

Mr. Jeremy Garnet stood with his back to the empty grate–for the time was summer–watching with a jaundiced eye the removal of his breakfast things.

“Would it bore you if I became auto-biographical?”

“Never mind. I merely wish to sketch for your benefit a portion of my life’s history. At eleven o’clock last night I went to bed, and at once sank into a dreamless sleep. About four hours later there was a clattering on the stairs which shook the house like a jelly. It was the gentleman in the top room–I forget his name–returning to roost. He was humming a patriotic song. A little while later there were a couple of loud crashes. He had removed his boots. All this while snatches of the patriotic song came to me through the ceiling of my bedroom. At about four-thirty there was a lull, and I managed to get to sleep again. I wish when you see that gentleman, Mrs. Medley, you would give him my compliments, and ask him if he could shorten his program another night. He might cut out the song, for a start.”

“And it’s highly improbable,” said Garnet, “that he will ever grow old, if he repeats his last night’s performance. I have no wish to shed blood wantonly, but there are moments when one must lay aside one’s personal prejudices, and act for the good of the race. A man who hums patriotic songs at four o’clock in the morning doesn’t seem to me to fit into the scheme of universal happiness. So you will mention it to him, won’t you?”

On the strength of the fact that he wrote for the newspapers and had published two novels, Mrs. Medley regarded Mr. Garnet as an eccentric individual who had to be humored. Whatever he did or said filled her with a mild amusement. She received his daily harangues in the same spirit as that in which a nurse listens to the outpourings of the family baby. She was surprised when he said anything sensible enough for her to understand.

His table being clear of breakfast and his room free from disturbing influences, the exhilaration caused by his chat with his landlady left Mr. Garnet. Life seemed very gray to him. He was a conscientious young man, and he knew that he ought to sit down and do some work. On the other hand, his brain felt like a cauliflower, and he could not think what to write about. This is one of the things which sour the young author even more than do those long envelopes which so tastefully decorate his table of a morning.

He felt particularly unfitted for writing at that moment. The morning is not the time for inventive work. An article may be polished then, or a half-finished story completed, but 11 A.M. is not the hour at which to invent.

Jerry Garnet wandered restlessly about his sitting room. Rarely had it seemed so dull and depressing to him as it did then. The photographs on the mantelpiece irritated him. There was no change in them. They struck him as the concrete expression of monotony. His eye was caught by a picture hanging out of the straight. He jerked it to one side, and the effect became worse. He jerked it back again, and the thing looked as if it had been hung in a dim light by an astigmatic drunkard. Five minutes’ pulling and hauling brought it back to a position only a shade less crooked than that in which he had found it, and by that time his restlessness had grown like a mushroom.

He looked out of the window. The sunlight was playing on the house opposite. He looked at his boots. At this point conscience prodded him sharply.

“I won’t,” he muttered fiercely, “I will work. I’ll turn out something, even if it’s the worst rot ever written.”

With which admirable sentiment he tracked his blotting pad to its hiding place (Mrs. Medley found a fresh one every day), collected ink and pens, and sat down.

There was a distant thud from above, and shortly afterwards a thin tenor voice made itself heard above a vigorous splashing. The young gentleman on the top floor was starting another day.

“Oi’ll–er–sing thee saw-ongs”–brief pause, then in a triumphant burst, as if the singer had just remembered the name–“ovarraby.”

Mr. Garnet breathed a prayer and glared at the ceiling.

Sudden and grewsome pause. The splashing ceased. The singer could hardly have been drowned in a hip bath, but Mr. Garnet hoped for the best.

His hopes were shattered.

Jerry Garnet sprang from his seat and paced the room.

“This is getting perfectly impossible,” he said to himself. “I must get out of this. A fellow can’t work in London. I’ll go down to some farmhouse in the country. I can’t think here. You might just as well try to work at a musical ‘At Home.’”