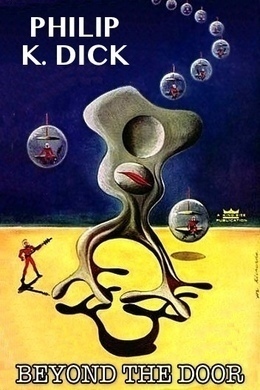 In Beyond the Door, Dick spins the tale of a thoughtful gift that holds unspeakable secrets. Though protagonist Larry Thomas had only the best intentions when he picked out the tchotchke for his wife, it’s a decision he’ll always regret.

That night at the dinner table he brought it out and set it down beside her plate. Doris stared at it, her hand to her mouth. “My God, what is it?” She looked up at him, bright-eyed.

Doris tore the ribbon and paper from the square package with her sharp nails, her bosom rising and falling. Larry stood watching her as she lifted the lid. He lit a cigarette and leaned against the wall.

“It’s made in Germany,” Larry said. After a moment he added, “Carl got it for me wholesale. He knows some guy in the clock business. Otherwise I wouldn’t have–” He stopped.

Doris made a funny little sound.

“I mean, otherwise I wouldn’t have been able to afford it.” He scowled. “What’s the matter with you? You’ve got your clock, haven’t you? Isn’t that what you want?”

Doris sat holding onto the clock, her fingers pressed against the brown wood.

He watched in amazement as she leaped up and ran from the room, still clutching the clock. He shook his head. “Never satisfied. They’re all that way. Never get enough.”

He sat down at the table and finished his meal.

The cuckoo clock was not very large. It was hand-made, however, and there were countless frets on it, little indentations and ornaments scored in the soft wood. Doris sat on the bed drying her eyes and winding the clock. She set the hands by her wristwatch. Presently she carefully moved the hands to two minutes of ten. She carried the clock over to the dresser and propped it up.

Then she sat waiting, her hands twisted together in her lap–waiting for the cuckoo to come out, for the hour to strike.

As she sat she thought about Larry and what he had said. And what she had said, too, for that matter–not that she could be blamed for any of it. After all, she couldn’t keep listening to him forever without defending herself; you had to blow your own trumpet in the world.

She touched her handkerchief to her eyes suddenly. Why did he have to say that, about getting it wholesale? Why did he have to spoil it all? If he felt that way he needn’t have got it in the first place. She clenched her fists. He was so mean, so damn mean.

But she was glad of the little clock sitting there ticking to itself, with its funny grilled edges and the door. Inside the door was the cuckoo, waiting to come out. Was he listening, his head cocked on one side, listening to hear the clock strike so that he would know to come out?

Did he sleep between hours? Well, she would soon see him: she could ask him. And she would show the clock to Bob. He would love it; Bob loved old things, even old stamps and buttons. He liked to go with her to the stores. Of course, it was a little awkward, but Larry had been staying at the office so much, and that helped. If only Larry didn’t call up sometimes to–

There was a whirr. The clock shuddered and all at once the door opened. The cuckoo came out, sliding swiftly. He paused and looked around solemnly, scrutinizing her, the room, the furniture.

It was the first time he had seen her, she realized, smiling to herself in pleasure. She stood up, coming toward him shyly. “Go on,” she said. “I’m waiting.”

The cuckoo opened his bill. He whirred and chirped, quickly, rhythmically. Then, after a moment of contemplation, he retired. And the door snapped shut.

She was delighted. She clapped her hands and spun in a little circle. He was marvelous, perfect! And the way he had looked around, studying her, sizing her up. He liked her; she was certain of it. And she, of course, loved him at once, completely. He was just what she had hoped would come out of the little door.

Doris went to the clock. She bent over the little door, her lips close to the wood. “Do you hear me?” she whispered. “I think you’re the most wonderful cuckoo in the world.” She paused, embarrassed. “I hope you’ll like it here.”

Then she went downstairs again, slowly, her head high.