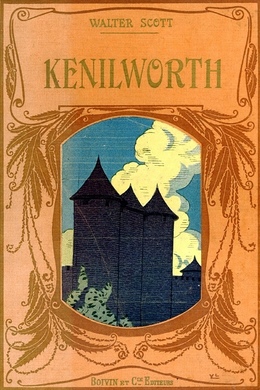 Scott’s imagination created Kenilworth, a romance novel of conflicting characters. He has brought to life the character of Queen Elizabeth with the most brilliant and enchanting effect. The novel tells the story of the secret, tragic marriage of Amy Robsart to Robert Dudley that is marred by ambition. The theme of selfishness versus selflessness and ambition versus love is superbly presented.

It is the privilege of tale-tellers to open their story in an inn, the free rendezvous of all travellers, and where the humour of each displays itself without ceremony or restraint. This is specially suitable when the scene is laid during the old days of merry England, when the guests were in some sort not merely the inmates, but the messmates and temporary companions of mine Host, who was usually a personage of privileged freedom, comely presence, and good-humour. Patronized by him the characters of the company were placed in ready contrast; and they seldom failed, during the emptying of a six-hooped pot, to throw off reserve, and present themselves to each other, and to their landlord, with the freedom of old acquaintance.

The village of Cumnor, within three or four miles of Oxford, boasted, during the eighteenth of Queen Elizabeth, an excellent inn of the old stamp, conducted, or rather ruled, by Giles Gosling, a man of a goodly person, and of somewhat round belly; fifty years of age and upwards, moderate in his reckonings, prompt in his payments, having a cellar of sound liquor, a ready wit, and a pretty daughter. Since the days of old Harry Baillie of the Tabard in Southwark, no one had excelled Giles Gosling in the power of pleasing his guests of every description; and so great was his fame, that to have been in Cumnor without wetting a cup at the bonny Black Bear, would have been to avouch one’s-self utterly indifferent to reputation as a traveller. A country fellow might as well return from London without looking in the face of majesty. The men of Cumnor were proud of their Host, and their Host was proud of his house, his liquor, his daughter, and himself.

It was in the courtyard of the inn which called this honest fellow landlord, that a traveller alighted in the close of the evening, gave his horse, which seemed to have made a long journey, to the hostler, and made some inquiry, which produced the following dialogue betwixt the myrmidons of the bonny Black Bear.

“At hand, Will Hostler,” replied the man of the spigot, showing himself in his costume of loose jacket, linen breeches, and green apron, half within and half without a door, which appeared to descend to an outer cellar.

“Here is a gentleman asks if you draw good ale,” continued the hostler.

“Beshrew my heart else,” answered the tapster, “since there are but four miles betwixt us and Oxford. Marry, if my ale did not convince the heads of the scholars, they would soon convince my pate with the pewter flagon.”

“Call you that Oxford logic?” said the stranger, who had now quitted the rein of his horse, and was advancing towards the inn-door, when he was encountered by the goodly form of Giles Gosling himself.

“Is it logic you talk of, Sir Guest?” said the host; “why, then, have at you with a downright consequence–

“Amen! with all my heart, my good host,” said the stranger; “let it be a quart of your best Canaries, and give me your good help to drink it.”

“Nay, you are but in your accidence yet, Sir Traveller, if you call on your host for help for such a sipping matter as a quart of sack; Were it a gallon, you might lack some neighbouring aid at my hand, and yet call yourself a toper.”

“Fear me not.” said the guest, “I will do my devoir as becomes a man who finds himself within five miles of Oxford; for I am not come from the field of Mars to discredit myself amongst the followers of Minerva.”

As he spoke thus, the landlord, with much semblance of hearty welcome, ushered his guest into a large, low chamber, where several persons were seated together in different parties–some drinking, some playing at cards, some conversing, and some, whose business called them to be early risers on the morrow, concluding their evening meal, and conferring with the chamberlain about their night’s quarters.