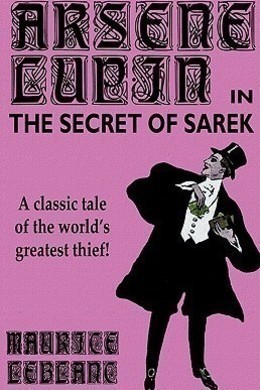 The Secret of Sarek

The war has led to so many upheavals that not many people now remember the Hergemont scandal of seventeen years ago. Let us recall the details in a few lines. One day in July 1902, M. Antoine d’Hergemont, the author of a series of well-known studies on the megalithic monuments of Brittany, was walking in the Bois with his daughter V ronique, when he was assaulted by four men, receiving a blow in the face with a walking-stick which felled him to the ground.

Contents: The Deserted Cabin; On The Edge Of The Atlantic; Vorski’s Son; The Poor People Of Sarek; “Four Women Crucified”; All’s Well; François And Stéphane; Anguish; The Death-chamber; The Escape; The Scourge Of God; The Ascent Of Golgotha; “Eloi, Eloi, Lama Sabachthani!”; The Ancient Druid; The Hall Of The Underground Sacrifices; The Hall Of The Kings Of Bohemia; “cruel Prince, Obeying Destiny”; The God-Stone.

Into the picturesque village of Le Faouet, situated in the very heart of Brittany, there drove one morning in the month of May a lady whose spreading grey cloak and the thick veil that covered her face failed to hide her remarkable beauty and perfect grace of figure.

The lady took a hurried lunch at the principal inn. Then, at about half-past eleven, she begged the proprietor to look after her bag for her, asked for a few particulars about the neighbourhood and walked through the village into the open country.

The road almost immediately branched into two, of which one led to Quimper and the other to Quimperlé. Selecting the latter, she went down into the hollow of a valley, climbed up again and saw on her right, at the corner of another road, a sign-post bearing the inscription, “Locriff, 3 kilometers.”

“This is the place,” she said to herself.

Nevertheless, after casting a glance around her, she was surprised not to find what she was looking for and wondered whether she had misunderstood her instructions.

There was no one near her nor any one within sight, as far as the eye could reach over the Breton country-side, with its tree-lined meadows and undulating hills. Not far from the village, rising amid the budding greenery of spring, a small country house lifted its grey front, with the shutters to all the windows closed. At twelve o’clock, the angelus-bells pealed through the air and were followed by complete peace and silence.

Véronique sat down on the short grass of a bank, took a letter from her pocket and smoothed out the many sheets, one by one.

The first page was headed:

Next came an address:

And the letter ran: