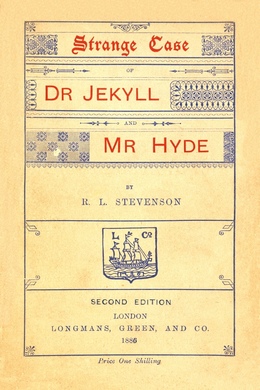 The Strange Case Of Dr. Jekyll And Mr. Hyde

Good and evil, right and wrong. Both are seen through the eyes of John Utterson, a lawyer and friend of the scientist Dr. Jekyll. After hearing the alarming account of the horrendous trampling of a small girl “like some damned juggernaut” by a violent man named Mr. Hyde, who also holds a connection to the lawyer’s dear friend, Utterson’s curiosity gets the better of him and he begins to investigate. As he probes further into the events and the hidden life of Mr. Hyde, Utterson slowly uncovers a terrifying and ghastly story. The young Robert Louis Stevenson suffered from repeated nightmares of living a double life, in which by day he worked as a respectable doctor and by night he roamed the back alleys of old-town Edinburgh. In three days of furious writing, he produced a story about his dream existence. His wife found it too gruesome, so he promptly burned the manuscript. In another three days, he wrote it again. The Strange Case of Dr. Jekyll and Mr. Hyde was published as a “shilling shocker” in 1886, and became an instant classic.

Mr. Utterson the lawyer was a man of a rugged countenance that was never lighted by a smile; cold, scanty and embarrassed in discourse; backward in sentiment; lean, long, dusty, dreary and yet somehow lovable. At friendly meetings, and when the wine was to his taste, something eminently human beaconed from his eye; something indeed which never found its way into his talk, but which spoke not only in these silent symbols of the after-dinner face, but more often and loudly in the acts of his life. He was austere with himself; drank gin when he was alone, to mortify a taste for vintages; and though he enjoyed the theatre, had not crossed the doors of one for twenty years. But he had an approved tolerance for others; sometimes wondering, almost with envy, at the high pressure of spirits involved in their misdeeds; and in any extremity inclined to help rather than to reprove. “I incline to Cain’s heresy,” he used to say quaintly: “I let my brother go to the devil in his own way.” In this character, it was frequently his fortune to be the last reputable acquaintance and the last good influence in the lives of downgoing men. And to such as these, so long as they came about his chambers, he never marked a shade of change in his demeanour.

No doubt the feat was easy to Mr. Utterson; for he was undemonstrative at the best, and even his friendship seemed to be founded in a similar catholicity of good-nature. It is the mark of a modest man to accept his friendly circle ready-made from the hands of opportunity; and that was the lawyer’s way. His friends were those of his own blood or those whom he had known the longest; his affections, like ivy, were the growth of time, they implied no aptness in the object. Hence, no doubt the bond that united him to Mr. Richard Enfield, his distant kinsman, the well-known man about town. It was a nut to crack for many, what these two could see in each other, or what subject they could find in common. It was reported by those who encountered them in their Sunday walks, that they said nothing, looked singularly dull and would hail with obvious relief the appearance of a friend. For all that, the two men put the greatest store by these excursions, counted them the chief jewel of each week, and not only set aside occasions of pleasure, but even resisted the calls of business, that they might enjoy them uninterrupted.

It chanced on one of these rambles that their way led them down a by-street in a busy quarter of London. The street was small and what is called quiet, but it drove a thriving trade on the weekdays. The inhabitants were all doing well, it seemed and all emulously hoping to do better still, and laying out the surplus of their grains in coquetry; so that the shop fronts stood along that thoroughfare with an air of invitation, like rows of smiling saleswomen. Even on Sunday, when it veiled its more florid charms and lay comparatively empty of passage, the street shone out in contrast to its dingy neighbourhood, like a fire in a forest; and with its freshly painted shutters, well-polished brasses, and general cleanliness and gaiety of note, instantly caught and pleased the eye of the passenger.

Two doors from one corner, on the left hand going east the line was broken by the entry of a court; and just at that point a certain sinister block of building thrust forward its gable on the street. It was two storeys high; showed no window, nothing but a door on the lower storey and a blind forehead of discoloured wall on the upper; and bore in every feature, the marks of prolonged and sordid negligence. The door, which was equipped with neither bell nor knocker, was blistered and distained. Tramps slouched into the recess and struck matches on the panels; children kept shop upon the steps; the schoolboy had tried his knife on the mouldings; and for close on a generation, no one had appeared to drive away these random visitors or to repair their ravages.

Mr. Enfield and the lawyer were on the other side of the by-street; but when they came abreast of the entry, the former lifted up his cane and pointed.

“Did you ever remark that door?” he asked; and when his companion had replied in the affirmative. “It is connected in my mind,” added he, “with a very odd story.”

“Indeed?” said Mr. Utterson, with a slight change of voice, “and what was that?”