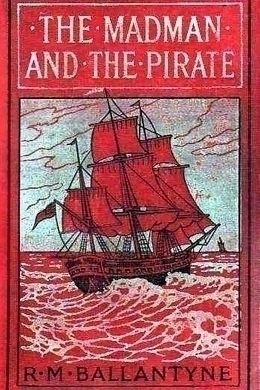 The Madman and the Pirate

The Madman, Antonio Zeppa, is abandoned on Ratinga, an island in the Pacific, where there later appears a miserable ex-pirate called Richard Rosco. The two start up a sort of love-hate relationship. The natives put Rosco on a fire to burn him at the stake, but he is rescued by Zeppa, who carries him up to his cave in the mountains, and tends to his injured feet. Eventually a vessel calls at the island, with Zeppa’s son on board. From then on the story winds to an end, with everyone who belongs there safely back home in Britain.

A beautiful island lying like a gem on the breast of the great Pacific– a coral reef surrounding, and a calm lagoon within, on the glass-like surface of which rests a most piratical-looking schooner.

Such is the scene to which we invite our reader’s attention for a little while.

At the time of which we write it was an eminently peaceful scene. So still was the atmosphere, so unruffled the water, that the island and the piratical-looking schooner seemed to float in the centre of a duplex world, where every cloudlet in the blue above had its exact counterpart in the blue below. No sounds were heard save the dull roar of the breaker that fell, at long regular intervals, on the seaward side of the reef, and no motion was visible except the back-fin of a shark as it cut a line occasionally on the sea, or the stately sweep of an albatross, as it passed above the schooner’s masts and cast a look of solemn inquiry upon her deck.

But that schooner was not a pirate. She was an honest trader–at least so it was said–though what she traded in we have no more notion than the albatross which gazed at her with such inquisitive sagacity. Her decks were not particularly clean, her sails by no means snow-white. She had, indeed, four goodly-sized carronades, but these were not an extraordinary part of a peaceful trader’s armament in those regions, where man was, and still is, unusually savage. The familiar Union Jack hung at her peak, and some of her men were sedate-looking Englishmen, though others were Lascars and Malays, of the cut-throat type, of whom any wickedness might be expected when occasion served.

The crew seemed to have been overcome by the same somnolent influence that had subdued Nature, for they all lay about the deck sleeping or dozing in various sprawling attitudes, with the exception of the captain and the mate.

The former was a huge, rugged man of forbidding aspect, and obviously savage temper. The latter–well, it is not easy to say what were his chief characteristics, so firmly did he control the features of a fine countenance in which the tiger-like blue eyes alone seemed untamable. He was not much above the middle height; but his compact frame was wiry and full of youthful force.

“Lower away the dinghy,” said the captain, gruffly, to the mate, “and let one of these lazy lubbers get into her with a box of figs. Get into her yourself? I may want you.”

The mate replied with a stern “Ay, ay, sir,” and rose from the gun-carriage on which he had been seated, while the captain went below.

In a few minutes the latter reappeared, and soon the little boat with its three occupants was skimming over the lagoon towards the land.

On that land a strange and interesting work was going on at the time. It was no less than the erection of a church by men who had never before placed one stone upon another–at least with a view to house-building.

The tribe to which these builders belonged had at first received their missionary with yells of execration, had torn the garments from his back, had kicked him into the sea and would infallibly have drowned him if the boat from which he landed had not returned in haste and rescued him. Fortunately, that missionary was well accustomed to a state of nudity, being himself a South Sea islander. He was also used to a pretty rough life, besides being young and strong. He therefore soon recovered from the treatment he had received, and, not many weeks afterwards, determined to make another attempt to land on the island of Ratinga–as our coral-gem on the ocean’s breast was named.

For Waroonga’s heart had been opened by the Holy Spirit to receive Jesus Christ, and the consequent flame of love to the souls of his countrymen burned too brightly to be quenched by a first failure. The desire to possess the little box of clothes and trifles with which he had landed on Ratinga had been the cause, he thought, of the savages attacking him; so he resolved to divest himself totally of this world’s goods and go to his brethren with nothing but the Word of God in his hand. He did so. The mission-boat once again conveyed him from headquarters to the scene of his former discomfiture, and, when close to the beach, where the natives awaited the landing of the party with warlike demonstrations, he slipped out of his clothes into the water and swam ashore–the Bible, in the native tongue, being tied carefully on the top of his head to keep it dry.

Surprise at this mode of proceeding caused the natives to receive him with less violence than before. Their curiosity led them to listen to what he had to say. Then a chief named Tomeo took him by the shoulders, placed his nose against that of Waroonga and rubbed it. This being equivalent to a friendly shake of the hand, the missionary signalled to his friends in the boat to go away, which they accordingly did, and left their courageous brother to his fate.