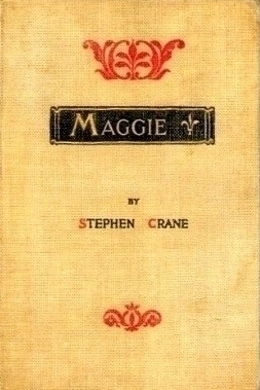 A Girl of the Streets

This harrowing tale of a young girl in the slums is a searing portrayal of turn-of-the-century New York, and Stephen Crane’s most innovative work. When published, it broke new ground with its vivid characters, its brutal naturalism, and its empathic rendering of the lives of the poor. It remains both powerful, severe, and harshly comic (in Alfred Kazin’s words) and a masterpiece of modern American prose. This edition includes Maggie and George’s Mother, Crane’s other Bowery tales, and the most comprehensive available selection of Crane’s New York journalism.

A very little boy stood upon a heap of gravel for the honor of Rum Alley. He was throwing stones at howling urchins from Devil’s Row who were circling madly about the heap and pelting at him.

His infantile countenance was livid with fury. His small body was writhing in the delivery of great, crimson oaths.

Howls of renewed wrath went up from Devil’s Row throats. Tattered gamins on the right made a furious assault on the gravel heap. On their small, convulsed faces there shone the grins of true assassins. As they charged, they threw stones and cursed in shrill chorus.

The little champion of Rum Alley stumbled precipitately down the other side. His coat had been torn to shreds in a scuffle, and his hat was gone. He had bruises on twenty parts of his body, and blood was dripping from a cut in his head. His wan features wore a look of a tiny, insane demon.

On the ground, children from Devil’s Row closed in on their antagonist. He crooked his left arm defensively about his head and fought with cursing fury. The little boys ran to and fro, dodging, hurling stones and swearing in barbaric trebles.

From a window of an apartment house that upreared its form from amid squat, ignorant stables, there leaned a curious woman. Some laborers, unloading a scow at a dock at the river, paused for a moment and regarded the fight. The engineer of a passive tugboat hung lazily to a railing and watched. Over on the Island, a worm of yellow convicts came from the shadow of a building and crawled slowly along the river’s bank.

A stone had smashed into Jimmie’s mouth. Blood was bubbling over his chin and down upon his ragged shirt. Tears made furrows on his dirt-stained cheeks. His thin legs had begun to tremble and turn weak, causing his small body to reel. His roaring curses of the first part of the fight had changed to a blasphemous chatter.

In the yells of the whirling mob of Devil’s Row children there were notes of joy like songs of triumphant savagery. The little boys seemed to leer gloatingly at the blood upon the other child’s face.

Down the avenue came boastfully sauntering a lad of sixteen years, although the chronic sneer of an ideal manhood already sat upon his lips. His hat was tipped with an air of challenge over his eye. Between his teeth, a cigar stump was tilted at the angle of defiance. He walked with a certain swing of the shoulders which appalled the timid. He glanced over into the vacant lot in which the little raving boys from Devil’s Row seethed about the shrieking and tearful child from Rum Alley.

He strode over to the cursing circle, swinging his shoulders in a manner which denoted that he held victory in his fists. He approached at the back of one of the most deeply engaged of the Devil’s Row children.

“Ah, what deh hell,” he said, and smote the deeply-engaged one on the back of the head. The little boy fell to the ground and gave a hoarse, tremendous howl. He scrambled to his feet, and perceiving, evidently, the size of his assailant, ran quickly off, shouting alarms. The entire Devil’s Row party followed him. They came to a stand a short distance away and yelled taunting oaths at the boy with the chronic sneer. The latter, momentarily, paid no attention to them.

“What deh hell, Jimmie?” he asked of the small champion.

Jimmie wiped his blood-wet features with his sleeve.

“Well, it was dis way, Pete, see! I was goin’ teh lick dat Riley kid and dey all pitched on me.”

Some Rum Alley children now came forward. The party stood for a moment exchanging vainglorious remarks with Devil’s Row. A few stones were thrown at long distances, and words of challenge passed between small warriors. Then the Rum Alley contingent turned slowly in the direction of their home street. They began to give, each to each, distorted versions of the fight. Causes of retreat in particular cases were magnified. Blows dealt in the fight were enlarged to catapultian power, and stones thrown were alleged to have hurtled with infinite accuracy. Valor grew strong again, and the little boys began to swear with great spirit.

Little Jimmie was striving to stanch the flow of blood from his cut lips. Scowling, he turned upon the speaker.

“Ah, where deh hell was yeh when I was doin’ all deh fightin?” he demanded. “Youse kids makes me tired.”

“Ah,” said the other in the same tone.

They struck at each other, clinched, and rolled over on the cobble stones.