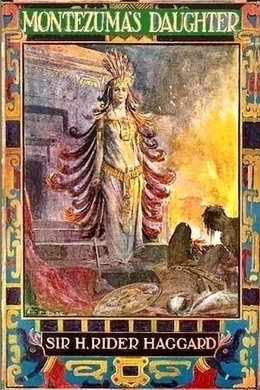 This remarkable novel by adventure writer H. Rider Haggard can be enjoyed on many levels. As a tale of adventure, it takes the reader through 16th-century England, Spain, and Mexico at the time of the Spanish Conquest. But on a deeper level, the author’s hopes for humanity shine through the darkness of this time to illuminate the reader with his spiritual philosophy. The closing chapters on the fall of the Aztec capital of Tenoctitlan under the assault of Cortez are profoundly moving. Montezuma’s Daughter is a fascinating historical novel and love story, with enough action to keep even the most jaded reader on the edge of the chair. And those who value the deeper aspects of the author’s writing will not be disappointed.

Now glory be to God who has given us the victory! It is true, the strength of Spain is shattered, her ships are sunk or fled, the sea has swallowed her soldiers and her sailors by hundreds and by thousands, and England breathes again. They came to conquer, to bring us to the torture and the stake–to do to us free Englishmen as Cortes did by the Indians of Anahuac. Our manhood to the slave bench, our daughters to dishonour, our souls to the loving-kindness of the priest, our wealth to the Emperor and the Pope! God has answered them with his winds, Drake has answered them with his guns. They are gone, and with them the glory of Spain.

I, Thomas Wingfield, heard the news to-day on this very Thursday in the Bungay market-place, whither I went to gossip and to sell the apples which these dreadful gales have left me, as they hang upon my trees.

Before there had been rumours of this and of that, but here in Bungay was a man named Young, of the Youngs of Yarmouth, who had served in one of the Yarmouth ships in the fight at Gravelines, aye and sailed north after the Spaniards till they were lost in the Scottish seas.

Little things lead to great, men say, but here great things lead to little, for because of these tidings it comes about that I, Thomas Wingfield, of the Lodge and the parish of Ditchingham in the county of Norfolk, being now of a great age and having only a short time to live, turn to pen and ink. Ten years ago, namely, in the year 1578, it pleased her Majesty, our gracious Queen Elizabeth, who at that date visited this county, that I should be brought before her at Norwich. There and then, saying that the fame of it had reached her, she commanded me to give her some particulars of the story of my life, or rather of those twenty years, more or less, which I spent among the Indians at that time when Cortes conquered their country of Anahuac, which is now known as Mexico. But almost before I could begin my tale, it was time for her to start for Cossey to hunt the deer, and she said it was her wish that I should write the story down that she might read it, and moreover that if it were but half as wonderful as it promised to be, I should end my days as Sir Thomas Wingfield. To this I answered her Majesty that pen and ink were tools I had no skill in, yet I would bear her command in mind. Then I made bold to give her a great emerald that once had hung upon the breast of Montezuma’s daughter, and of many a princess before her, and at the sight of it her eyes glistened brightly as the gem, for this Queen of ours loves such costly playthings. Indeed, had I so desired, I think that I might then and there have struck a bargain, and set the stone against a title; but I, who for many years had been the prince of a great tribe, had no wish to be a knight. So I kissed the royal hand, and so tightly did it grip the gem within that the knuckle joints shone white, and I went my ways, coming back home to this my house by the Waveney on that same day.

Now the Queen’s wish that I should set down the story of my life remained in my mind, and for long I have desired to do it before life and story end together. The labour, indeed, is great to one unused to such tasks; but why should I fear labour who am so near to the holiday of death? I have seen things that no other Englishman has seen, which are worthy to be recorded; my life has been most strange, many a time it has pleased God to preserve it when all seemed lost, and this perchance He has done that the lesson of it might become known to others. For there is a lesson in it and in the things that I have seen, and it is that no wrong can ever bring about a right, that wrong will breed wrong at last, and be it in man or people, will fall upon the brain that thought it and the hand that wrought it.