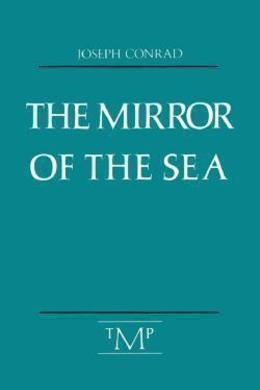 The Mirror of the Sea

Although Joseph Conrad achieved acclaim as one of the masters of English-language fiction, his own life story is as fascinating and engaging as Heart of Darkness or Lord Jim. The volume The Mirror of the Sea is a collection of several autobiographical sketches, remembrances and essays that Conrad originally published in a number of European magazines.

Landfall and Departure mark the rhythmical swing of a seaman’s life and of a ship’s career. From land to land is the most concise definition of a ship’s earthly fate.

A “Departure” is not what a vain people of landsmen may think. The term “Landfall” is more easily understood; you fall in with the land, and it is a matter of a quick eye and of a clear atmosphere. The Departure is not the ship’s going away from her port any more than the Landfall can be looked upon as the synonym of arrival. But there is this difference in the Departure: that the term does not imply so much a sea event as a definite act entailing a process—the precise observation of certain landmarks by means of the compass card.

Your Landfall, be it a peculiarly-shaped mountain, a rocky headland, or a stretch of sand-dunes, you meet at first with a single glance. Further recognition will follow in due course; but essentially a Landfall, good or bad, is made and done with at the first cry of “Land ho!” The Departure is distinctly a ceremony of navigation. A ship may have left her port some time before; she may have been at sea, in the fullest sense of the phrase, for days; but, for all that, as long as the coast she was about to leave remained in sight, a southern-going ship of yesterday had not in the sailor’s sense begun the enterprise of a passage.

The taking of Departure, if not the last sight of the land, is, perhaps, the last professional recognition of the land on the part of a sailor. It is the technical, as distinguished from the sentimental, “good-bye.” Henceforth he has done with the coast astern of his ship. It is a matter personal to the man. It is not the ship that takes her departure; the seaman takes his Departure by means of cross-bearings which fix the place of the first tiny pencil-cross on the white expanse of the track-chart, where the ship’s position at noon shall be marked by just such another tiny pencil cross for every day of her passage. And there may be sixty, eighty, any number of these crosses on the ship’s track from land to land. The greatest number in my experience was a hundred and thirty of such crosses from the pilot station at the Sand Heads in the Bay of Bengal to the Scilly’s light. A bad passage…

A Departure, the last professional sight of land, is always good, or at least good enough. For, even if the weather be thick, it does not matter much to a ship having all the open sea before her bows. A Landfall may be good or bad. You encompass the earth with one particular spot of it in your eye. In all the devious tracings the course of a sailing-ship leaves upon the white paper of a chart she is always aiming for that one little spot—maybe a small island in the ocean, a single headland upon the long coast of a continent, a lighthouse on a bluff, or simply the peaked form of a mountain like an ant-heap afloat upon the waters. But if you have sighted it on the expected bearing, then that Landfall is good. Fogs, snowstorms, gales thick with clouds and rain—those are the enemies of good Landfalls.

Some commanders of ships take their Departure from the home coast sadly, in a spirit of grief and discontent. They have a wife, children perhaps, some affection at any rate, or perhaps only some pet vice, that must be left behind for a year or more. I remember only one man who walked his deck with a springy step, and gave the first course of the passage in an elated voice. But he, as I learned afterwards, was leaving nothing behind him, except a welter of debts and threats of legal proceedings.

On the other hand, I have known many captains who, directly their ship had left the narrow waters of the Channel, would disappear from the sight of their ship’s company altogether for some three days or more. They would take a long dive, as it were, into their state-room, only to emerge a few days afterwards with a more or less serene brow. Those were the men easy to get on with. Besides, such a complete retirement seemed to imply a satisfactory amount of trust in their officers, and to be trusted displeases no seaman worthy of the name.

On my first voyage as chief mate with good Captain MacW— I remember that I felt quite flattered, and went blithely about my duties, myself a commander for all practical purposes. Still, whatever the greatness of my illusion, the fact remained that the real commander was there, backing up my self-confidence, though invisible to my eyes behind a maple-wood veneered cabin-door with a white china handle.