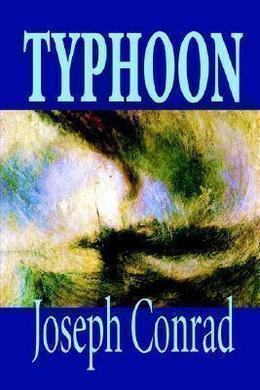 Captain McWhirr is a serious man who runs his steamer, the Nan-Shan, with efficiency and solidity. When a storm appears to be headed in their direction, MacWhirr is not concerned about his ship’s ability to weather it, but, when the storm turns out to be a powerful typhoon which surges in across the Pacific Ocean headed straight for the Nan-Shan, MacWhirr and his crew must work together if they want to survive. This classic sea-faring story is believed to be based on author Joseph Conrad’s real experiences at sea when he sailed aboard the John P. Best steamer under Captain John MacWhir.

Captain MacWhirr, of the steamer Nan-Shan, had a physiognomy that, in the order of material appearances, was the exact counterpart of his mind: it presented no marked characteristics of firmness or stupidity; it had no pronounced characteristics whatever; it was simply ordinary, irresponsive, and unruffled.

The only thing his aspect might have been said to suggest, at times, was bashfulness; because he would sit, in business offices ashore, sunburnt and smiling faintly, with downcast eyes. When he raised them, they were perceived to be direct in their glance and of blue colour. His hair was fair and extremely fine, clasping from temple to temple the bald dome of his skull in a clamp as of fluffy silk. The hair of his face, on the contrary, carroty and flaming, resembled a growth of copper wire clipped short to the line of the lip; while, no matter how close he shaved, fiery metallic gleams passed, when he moved his head, over the surface of his cheeks. He was rather below the medium height, a bit round-shouldered, and so sturdy of limb that his clothes always looked a shade too tight for his arms and legs. As if unable to grasp what is due to the difference of latitudes, he wore a brown bowler hat, a complete suit of a brownish hue, and clumsy black boots. These harbour togs gave to his thick figure an air of stiff and uncouth smartness. A thin silver watch chain looped his waistcoat, and he never left his ship for the shore without clutching in his powerful, hairy fist an elegant umbrella of the very best quality, but generally unrolled. Young Jukes, the chief mate, attending his commander to the gangway, would sometimes venture to say, with the greatest gentleness, “Allow me, sir”–and possessing himself of the umbrella deferentially, would elevate the ferule, shake the folds, twirl a neat furl in a jiffy, and hand it back; going through the performance with a face of such portentous gravity, that Mr. Solomon Rout, the chief engineer, smoking his morning cigar over the skylight, would turn away his head in order to hide a smile. “Oh! aye! The blessed gamp…. Thank ‘ee, Jukes, thank ‘ee,” would mutter Captain MacWhirr, heartily, without looking up.

Having just enough imagination to carry him through each successive day, and no more, he was tranquilly sure of himself; and from the very same cause he was not in the least conceited. It is your imaginative superior who is touchy, overbearing, and difficult to please; but every ship Captain MacWhirr commanded was the floating abode of harmony and peace. It was, in truth, as impossible for him to take a flight of fancy as it would be for a watchmaker to put together a chronometer with nothing except a two-pound hammer and a whip-saw in the way of tools. Yet the uninteresting lives of men so entirely given to the actuality of the bare existence have their mysterious side. It was impossible in Captain MacWhirr’s case, for instance, to understand what under heaven could have induced that perfectly satisfactory son of a petty grocer in Belfast to run away to sea. And yet he had done that very thing at the age of fifteen. It was enough, when you thought it over, to give you the idea of an immense, potent, and invisible hand thrust into the ant-heap of the earth, laying hold of shoulders, knocking heads together, and setting the unconscious faces of the multitude towards inconceivable goals and in undreamt-of directions.

His father never really forgave him for this undutiful stupidity. “We could have got on without him,” he used to say later on, “but there’s the business. And he an only son, too!” His mother wept very much after his disappearance. As it had never occurred to him to leave word behind, he was mourned over for dead till, after eight months, his first letter arrived from Talcahuano. It was short, and contained the statement: “We had very fine weather on our passage out.” But evidently, in the writer’s mind, the only important intelligence was to the effect that his captain had, on the very day of writing, entered him regularly on the ship’s articles as Ordinary Seaman. “Because I can do the work,” he explained. The mother again wept copiously, while the remark, “Tom’s an ass,” expressed the emotions of the father. He was a corpulent man, with a gift for sly chaffing, which to the end of his life he exercised in his intercourse with his son, a little pityingly, as if upon a half-witted person.