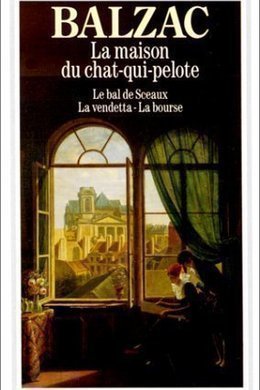 The plot for At the Sign of the Cat and Racket, if such a stately name can be given to so delicate a sketch, is of course open to downright British judgment to pronounce the self-sacriiice of Lebas more ignoblethan touching, the conduct of Théodore too childish to deserve the excuses sometimes possible for passionate inconstancy, and the character of Augustine angelically idiotic. The candew adorable which the Frenchman adores and exhibits in the girl the uncompromising, though mortal, passion of the woman are too different from any ideal that we have entertained, except for a very short period in the eighteenth century. Le Bal de Sceaux, with its satire on contempt for trade, is in some ways more like Balzacs young friend and pupil Charles de Bernard than like himself and I believe it attracted English notice pretty early.

Half-way down the Rue Saint-Denis, almost at the corner of the Rue du Petit-Lion, there stood formerly one of those delightful houses which enable historians to reconstruct old Paris by analogy. The threatening walls of this tumbledown abode seemed to have been decorated with hieroglyphics. For what other name could the passer-by give to the Xs and Vs which the horizontal or diagonal timbers traced on the front, outlined by little parallel cracks in the plaster? It was evident that every beam quivered in its mortices at the passing of the lightest vehicle. This venerable structure was crowned by a triangular roof of which no example will, ere long, be seen in Paris. This covering, warped by the extremes of the Paris climate, projected three feet over the roadway, as much to protect the threshold from the rainfall as to shelter the wall of a loft and its sill-less dormer-window. This upper story was built of planks, overlapping each other like slates, in order, no doubt, not to overweight the frail house.

One rainy morning in the month of March, a young man, carefully wrapped in his cloak, stood under the awning of a shop opposite this old house, which he was studying with the enthusiasm of an antiquary. In point of fact, this relic of the civic life of the sixteenth century offered more than one problem to the consideration of an observer. Each story presented some singularity; on the first floor four tall, narrow windows, close together, were filled as to the lower panes with boards, so as to produce the doubtful light by which a clever salesman can ascribe to his goods the color his customers inquire for. The young man seemed very scornful of this part of the house; his eyes had not yet rested on it. The windows of the second floor, where the Venetian blinds were drawn up, revealing little dingy muslin curtains behind the large Bohemian glass panes, did not interest him either. His attention was attracted to the third floor, to the modest sash-frames of wood, so clumsily wrought that they might have found a place in the Museum of Arts and Crafts to illustrate the early efforts of French carpentry. These windows were glazed with small squares of glass so green that, but for his good eyes, the young man could not have seen the blue-checked cotton curtains which screened the mysteries of the room from profane eyes. Now and then the watcher, weary of his fruitless contemplation, or of the silence in which the house was buried, like the whole neighborhood, dropped his eyes towards the lower regions. An involuntary smile parted his lips each time he looked at the shop, where, in fact, there were some laughable details.

A formidable wooden beam, resting on four pillars, which appeared to have bent under the weight of the decrepit house, had been encrusted with as many coats of different paint as there are of rouge on an old duchess’ cheek. In the middle of this broad and fantastically carved joist there was an old painting representing a cat playing rackets. This picture was what moved the young man to mirth. But it must be said that the wittiest of modern painters could not invent so comical a caricature. The animal held in one of its forepaws a racket as big as itself, and stood on its hind legs to aim at hitting an enormous ball, returned by a man in a fine embroidered coat. Drawing, color, and accessories, all were treated in such a way as to suggest that the artist had meant to make game of the shop-owner and of the passing observer. Time, while impairing this artless painting, had made it yet more grotesque by introducing some uncertain features which must have puzzled the conscientious idler. For instance, the cat’s tail had been eaten into in such a way that it might now have been taken for the figure of a spectator–so long, and thick, and furry were the tails of our forefathers’ cats. To the right of the picture, on an azure field which ill-disguised the decay of the wood, might be read the name “Guillaume,” and to the left, “Successor to Master Chevrel.” Sun and rain had worn away most of the gilding parsimoniously applied to the letters of this superscription, in which the Us and Vs had changed places in obedience to the laws of old-world orthography.