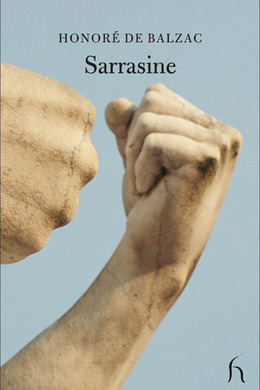 Ostensibly a tale of sexual androgyny, the power of love, and its bitter aftermath, this volume is in fact a study of the force of art on society and the deadly immortality of beauty. The nameless narrator attends a ball held by a wealthy Parisian family whose fortune comes from a work of art, and there meets an extraordinary old woman who bears a strange resemblance to the statue depicted in the painting. He returns to his lodgings to tell the tragic, yet ultimately rewarding tale of the creation of the painting’s inspiration: a tale of passion, lust, and transexuality, in which music and art, their powers combined, are fatally attracted.

I was buried in one of those profound reveries to which everybody, even a frivolous man, is subject in the midst of the most uproarious festivities. The clock on the Elysee-Bourbon had just struck midnight. Seated in a window recess and concealed behind the undulating folds of a curtain of watered silk, I was able to contemplate at my leisure the garden of the mansion at which I was passing the evening. The trees, being partly covered with snow, were outlined indistinctly against the grayish background formed by a cloudy sky, barely whitened by the moon. Seen through the medium of that strange atmosphere, they bore a vague resemblance to spectres carelessly enveloped in their shrouds, a gigantic image of the famous Dance of Death. Then, turning in the other direction, I could gaze admiringly upon the dance of the living! a magnificent salon, with walls of silver and gold, with gleaming chandeliers, and bright with the light of many candles. There the loveliest, the wealthiest women in Paris, bearers of the proudest titles, moved hither and thither, fluttered from room to room in swarms, stately and gorgeous, dazzling with diamonds; flowers on their heads and breasts, in their hair, scattered over their dresses or lying in garlands at their feet. Light quiverings of the body, voluptuous movements, made the laces and gauzes and silks swirl about their graceful figures. Sparkling glances here and there eclipsed the lights and the blaze of the diamonds, and fanned the flame of hearts already burning too brightly. I detected also significant nods of the head for lovers and repellent attitudes for husbands. The exclamation of the card-players at every unexpected coup, the jingle of gold, mingled with music and the murmur of conversation; and to put the finishing touch to the vertigo of that multitude, intoxicated by all the seductions the world can offer, a perfume-laden atmosphere and general exaltation acted upon their over-wrought imaginations. Thus, at my right was the depressing, silent image of death; at my left the decorous bacchanalia of life; on the one side nature, cold and gloomy, and in mourning garb; on the other side, man on pleasure bent. And, standing on the borderland of those two incongruous pictures, which repeated thousands of times in diverse ways, make Paris the most entertaining and most philosophical city in the world, I played a mental macedoine, half jesting, half funereal. With my left foot I kept time to the music, and the other felt as if it were in a tomb. My leg was, in fact, frozen by one of those draughts which congeal one half of the body while the other suffers from the intense heat of the salons–a state of things not unusual at balls.

“Monsieur de Lanty has not owned this house very long, has he?”

“Oh, yes! It is nearly ten years since the Marechal de Carigliano sold it to him.”

“These people must have an enormous fortune.”

“What a magnificent party! It is almost insolent in its splendor.”

I leaned forward and recognized the two persons who were talking as members of that inquisitive genus which, in Paris, busies itself exclusively with the Whys and Hows. Where does he come from? Who are they? What’s the matter with him? What has she done? They lowered their voices and walked away in order to talk more at their ease on some retired couch. Never was a more promising mine laid open to seekers after mysteries. No one knew from what country the Lanty family came, nor to what source–commerce, extortion, piracy, or inheritance–they owed a fortune estimated at several millions. All the members of the family spoke Italian, French, Spanish, English, and German, with sufficient fluency to lead one to suppose that they had lived long among those different peoples. Were they gypsies? were they buccaneers?

“The Comte de Lanty may have plundered some Casbah for all I care; I would like to marry his daughter!” cried a philosopher.