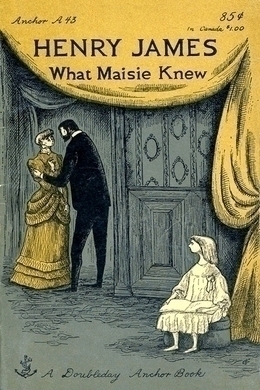 What Maisie Knew represents one of James’s finest reflections on the rites of passage from wonder to knowledge, and the question of their finality. The child of violently divorced parents, Maisie Farange opens her eyes on a distinctly modern world. Mothers and fathers keep changing their partners and names, while she herself becomes the pretext for all sorts of adult sexual intrigue. In this classic tale of the death of childhood, there is a savage comedy that owes much to Dickens. But for his portrayal of the child’s capacity for intelligent `wonder’, James summons all the subtlety he devotes elsewhere to his most celebrated adult protagonists. Neglected and exploited by everyone around her, Maisie inspires James to dwell with extraordinary acuteness on the things that may pass between adult and child.

The child was provided for, but the new arrangement was inevitably confounding to a young intelligence intensely aware that something had happened which must matter a good deal and looking anxiously out for the effects of so great a cause. It was to be the fate of this patient little girl to see much more than she at first understood, but also even at first to understand much more than any little girl, however patient, had perhaps ever understood before. Only a drummer-boy in a ballad or a story could have been so in the thick of the fight. She was taken into the confidence of passions on which she fixed just the stare she might have had for images bounding across the wall in the slide of a magic-lantern. Her little world was phantasmagoric–strange shadows dancing on a sheet. It was as if the whole performance had been given for her–a mite of a half-scared infant in a great dim theatre. She was in short introduced to life with a liberality in which the selfishness of others found its account, and there was nothing to avert the sacrifice but the modesty of her youth.

Her first term was with her father, who spared her only in not letting her have the wild letters addressed to her by her mother: he confined himself to holding them up at her and shaking them, while he showed his teeth, and then amusing her by the way he chucked them, across the room, bang into the fire. Even at that moment, however, she had a scared anticipation of fatigue, a guilty sense of not rising to the occasion, feeling the charm of the violence with which the stiff unopened envelopes, whose big monograms–Ida bristled with monograms–she would have liked to see, were made to whizz, like dangerous missiles, through the air. The greatest effect of the great cause was her own greater importance, chiefly revealed to her in the larger freedom with which she was handled, pulled hither and thither and kissed, and the proportionately greater niceness she was obliged to show. Her features had somehow become prominent; they were so perpetually nipped by the gentlemen who came to see her father and the smoke of whose cigarettes went into her face. Some of these gentlemen made her strike matches and light their cigarettes; others, holding her on knees violently jolted, pinched the calves of her legs till she shrieked–her shriek was much admired–and reproached them with being toothpicks. The word stuck in her mind and contributed to her feeling from this time that she was deficient in something that would meet the general desire. She found out what it was: it was a congenital tendency to the production of a substance to which Moddle, her nurse, gave a short ugly name, a name painfully associated at dinner with the part of the joint that she didn’t like. She had left behind her the time when she had no desires to meet, none at least save Moddle’s, who, in Kensington Gardens, was always on the bench when she came back to see if she had been playing too far. Moddle’s desire was merely that she shouldn’t do that, and she met it so easily that the only spots in that long brightness were the moments of her wondering what would become of her if, on her rushing back, there should be no Moddle on the bench. They still went to the Gardens, but there was a difference even there; she was impelled perpetually to look at the legs of other children and ask her nurse if THEY were toothpicks. Moddle was terribly truthful; she always said: “Oh my dear, you’ll not find such another pair as your own.” It seemed to have to do with something else that Moddle often said: “You feel the strain–that’s where it is; and you’ll feel it still worse, you know.”