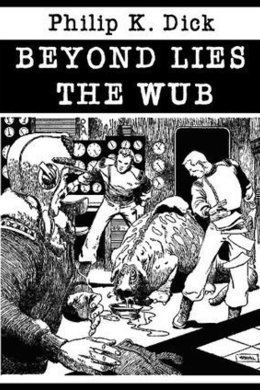 Beyond Lies the Wub

Spaceman Peterson buys a “wub” from a local before his departure from Mars and takes it back aboard the ship on which he is a crew member. But the captain Franco cites his concerns about the extra weight of having this huge pig-like creature on-board, although he really seems more interested in how it might taste. Once in space however…

They had almost finished with the loading. Outside stood the Optus, his arms folded, his face sunk in gloom. Captain Franco walked leisurely down the gangplank, grinning.

“What’s the matter?” he said. “You’re getting paid for all this.”

The Optus said nothing. He turned away, collecting his robes. The Captain put his boot on the hem of the robe.

“Oh?” The Optus turned with dignity. “I am going back to the village.” He looked toward the animals and birds being driven up the gangplank into the spaceship. “I must organize new hunts.”

Franco lit a cigarette. “Why not? You people can go out into the veldt and track it all down again. But when we run out halfway between Mars and Earth–”

The Optus went off, wordless. Franco joined the first mate at the bottom of the gangplank.

“How’s it coming?” he said. He looked at his watch. “We got a good bargain here.”

The mate glanced at him sourly. “How do you explain that?”

“What’s the matter with you? We need it more than they do.”

“I’ll see you later, Captain.” The mate threaded his way up the plank, between the long-legged Martian go-birds, into the ship. Franco watched him disappear. He was just starting up after him, up the plank toward the port, when he saw it.

“My God!” He stood staring, his hands on his hips. Peterson was walking along the path, his face red, leading it by a string.

“I’m sorry, Captain,” he said, tugging at the string. Franco walked toward him.

The wub stood sagging, its great body settling slowly. It was sitting down, its eyes half shut. A few flies buzzed about its flank, and it switched its tail.

It sat. There was silence.

“It’s a wub,” Peterson said. “I got it from a native for fifty cents. He said it was a very unusual animal. Very respected.”

“This?” Franco poked the great sloping side of the wub. “It’s a pig! A huge dirty pig!”

“A huge pig. It must weigh four hundred pounds.” Franco grabbed a tuft of the rough hair. The wub gasped. Its eyes opened, small and moist. Then its great mouth twitched.

A tear rolled down the wub’s cheek and splashed on the floor.

The wub survived the take-off, sound asleep in the hold of the ship. When they were out in space and everything was running smoothly, Captain Franco bade his men fetch the wub upstairs so that he might perceive what manner of beast it was.

The wub grunted and wheezed, squeezing up the passageway.

“Come on,” Jones grated, pulling at the rope. The wub twisted, rubbing its skin off on the smooth chrome walls. It burst into the ante-room, tumbling down in a heap. The men leaped up.

“Peterson says it’s a wub,” Jones said. “It belongs to him.” He kicked at the wub. The wub stood up unsteadily, panting.

“What’s the matter with it?” French came over. “Is it going to be sick?”

They watched. The wub rolled its eyes mournfully. It gazed around at the men.

“I think it’s thirsty,” Peterson said. He went to get some water. French shook his head.

“No wonder we had so much trouble taking off. I had to reset all my ballast calculations.”

Peterson came back with the water. The wub began to lap gratefully, splashing the men.

Captain Franco appeared at the door.

“Let’s have a look at it.” He advanced, squinting critically. “You got this for fifty cents?”

“Yes, sir,” Peterson said. “It eats almost anything. I fed it on grain and it liked that. And then potatoes, and mash, and scraps from the table, and milk. It seems to enjoy eating. After it eats it lies down and goes to sleep.”

“I see,” Captain Franco said. “Now, as to its taste. That’s the real question. I doubt if there’s much point in fattening it up any more. It seems fat enough to me already. Where’s the cook? I want him here. I want to find out–”

The wub stopped lapping and looked up at the Captain.

“Really, Captain,” the wub said. “I suggest we talk of other matters.”

The room was silent.

They all looked at the wub.

“It suggested we talk about other things.”

Franco walked toward the wub. He went all around it, examining it from every side. Then he came back over and stood with the men.

“I wonder if there’s a native inside it,” he said thoughtfully. “Maybe we should open it up and have a look.”

“Oh, goodness!” the wub cried. “Is that all you people can think of, killing and cutting?”

Franco clenched his fists. “Come out of there! Whoever you are, come out!”