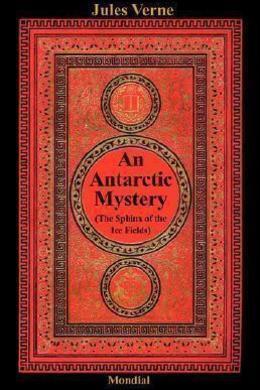 The Sphinx of the Ice Fields

Written in response to Edgar Allan Poe’s novel The Narrative of Arthur Gordon Pym of Nantucket, this follows the adventures of the narrator and his journey from the Kerguelen Islands aboard Halbrane. The story is set in 1839, eleven years after the events in Arthur Gordon Pym. The narrator is a wealthy American Jeorling, who has entertained himself with private studies of the wildlife on the Kerguelen Islands and is now looking for a passage back to the USA. Halbrane is one of the first ships to arrive at Kerguelen, and its captain Len Guy somewhat reluctantly agrees to have Jeorling as a passenger as far as Tristan da Cunha. Underway, they meet a stray iceberg with a dead body on it, which turns out to be a sailor from Jane. A note found with him indicates that he and several others including Janes captain William Guy had survived the assassination attempt at Tsalal and are still alive. Guy, who had talked to Jeorling earlier about the subject of Pym, reveals himself to be the brother of William Guy. He decides to try to come to the rescue of Janes crew. After taking on provisions on Tristan dAcunha and the Falklands, they head South with Jeorling still on board. They also take aboard another mysterious sailor named Hunt who is eager to join the search for undisclosed reasons. Extraordinarily mild weather allows the Halbrane to make good progress, and they break the pack ice barrier, which surrounds an ice-free Antarctic ocean, early in summer. They find first Bennets islet, where Jane had made a stop, and finally Tsalal. But the island is completely devastated, apparently by a recent massive earthquake, and deserted. They find lots of remains of Tsalals natives, who apparently died long before the earthquake, and the collar of Pyms dog, Tiger, but no trace of Jane.

No doubt the following narrative will be received: with entire incredulity, but I think it well that the public should be put in possession of the facts narrated in “An Antarctic Mystery.” The public is free to believe them or not, at its good pleasure.

No more appropriate scene for the wonderful and terrible adventures which I am about to relate could be imagined than the Desolation Islands, so called, in 1779, by Captain Cook. I lived there for several weeks, and I can affirm, on the evidence of my own eyes and my own experience, that the famous English explorer and navigator was happily inspired when he gave the islands that significant name.

Geographical nomenclature, however, insists on the name of Kerguelen, which is generally adopted for the group which lies in 49° 45’ south latitude, and 69° 6’ east longitude. This is just, because in 1772, Baron Kerguelen, a Frenchman, was the first to discover those islands in the southern part of the Indian Ocean. Indeed, the commander of the squadron on that voyage believed that he had found a new continent on the limit of the Antarctic seas, but in the course of a second expedition he recognized his error. There was only an archipelago. I may be believed when I assert that Desolation Islands is the only suitable name for this group of three hundred isles or islets in the midst of the vast expanse of ocean, which is constantly disturbed by austral storms.

Nevertheless, the group is inhabited, and the number of Europeans and Americans who formed the nucleus of the Kerguelen population at the date of the 2nd of August, 1839, had been augmented for two months past by a unit in my person. Just then I was waiting for an opportunity of leaving the place, having completed the geological and mineralogical studies which had brought me to the group in general and to Christmas Harbour in particular.

Christmas Harbour belongs to the most important islet of the archipelago, one that is about half as large as Corsica. It is safe, and easy, and free of access. Your ship may ride securely at single anchor in its waters, while the bay remains free from ice.

The Kerguelens possess hundreds of other fjords. Their coasts are notched and ragged, especially in the parts between the north and the south-east, where little islets abound. The soil, of volcanic origin, is composed of quartz, mixed with a bluish stone. In summer it is covered with green mosses, grey lichens, various hardy plants, especially wild saxifrage. Only one edible plant grows there, a kind of cabbage, not found anywhere else, and very bitter of flavour. Great flocks of royal and other penguins people these islets, finding good lodging on their rocky and mossy surface. These stupid birds, in their yellow and white feathers, with their heads thrown back and their wings like the sleeves of a monastic habit, look, at a distance, like monks in single file walking in procession along the beach.

The islands afford refuge to numbers of sea-calves, seals, and sea-elephants. The taking of those amphibious animals either on land or from the sea is profitable, and may lead to a trade which will bring a large number of vessels into these waters.

On the day already mentioned, I was accosted while strolling on the port by mine host of mine inn.

“Unless I am much mistaken, time is beginning to seem very long to you, Mr. Jeorling?”

The speaker was a big tall American who kept the only inn on the port.

“If you will not be offended, Mr. Atkins, I will acknowledge that I do find it long.”

“Of course I won’t be offended. Am I not as well used to answers of that kind as the rocks of the Cape to the rollers?”

“And you resist them equally well.”

“Of course. From the day of your arrival at Christmas Harbour, when you came to the Green Cormorant, I said to myself that in a fortnight, if not in a week, you would have enough of it, and would be sorry you had landed in the Kerguelens.”

“No, indeed, Mr. Atkins; I never regret anything I have done.”

“Besides, I have gained knowledge by observing curious things here. I have crossed the rolling plains, covered with hard stringy mosses, and I shall take away curious mineralogical and geological specimens with me. I have gone sealing, and taken sea-calves with your people. I have visited the rookeries where the penguin and the albatross live together in good fellowship, and that was well worth my while. You have given me now and again a dish of petrel, seasoned by your own hand, and very acceptable when one has a fine healthy appetite. I have found a friendly welcome at the Green Cormorant, and I am very much obliged to you. But, if I am right in my reckoning, it is two months since the Chilian two-master Penãs set me down at Christmas Harbour in mid-winter.