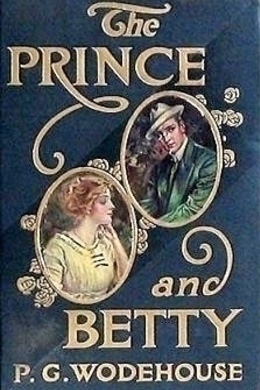 The Prince and Betty

The story tells of how unscrupulous millionaire Benjamin Scobell decides to build a casino on the small Mediterranean island of Mervo, dragging in the unwitting heir to the throne to help. Little does he know that his stepdaughter Betty has history with the young man John Maude, and his schemes lead to a rift between the newly-reunited pair.

A pretty girl in a blue dress came out of the house, and began to walk slowly across the terrace to where Elsa Keith sat with Marvin Rossiter in the shade of the big sycamore. Elsa and Marvin had become engaged some few days before, and were generally to be found at this time sitting together in some shaded spot in the grounds of the Keith’s Long Island home.

“Is that your friend, Miss Silver?”

“That’s Betty. We were at college together. I want you to like Betty.”

“Then I will. When did she arrive?”

“Last night. She’s here for a month. What’s the matter, Betty? This is Marvin. I want you to like Marvin.”

Betty Silver smiled. Her face, in repose, was rather wistful, but it lighted up when she smiled, and an unsuspected dimple came into being on her chin.

“Of course I shall,” she said.

Her big gray eyes seemed to search Marvin’s for an instant and Marvin had, almost subconsciously, a comfortable feeling that he had been tested and found worthy.

“What were you scowling at so ferociously, Betty?” asked Elsa.

“Was I scowling? I hope you didn’t think it was at you. Oh, Elsa, I’m miserable! I shall have to leave this heavenly place.”

“At once. And I was meaning to have the most lovely time. See what has come!”

She held out some flimsy sheets of paper.

“Great Scott! it looks like the scenario of a four-act play,” said Marvin. “That’s not all one cable, surely? Whoever sent it must be a millionaire.”

“He is. It’s from my stepfather. Read it out, Elsa. I want Mr. Rossiter to hear it. He may be able to tell me where Mervo is. Did you ever hear of Mervo, Mr. Rossiter?”

Elsa, who had been skimming the document with raised eyebrows, now read it out in its spacious entirety.

“By George!” said Marvin. “He certainly seems to want you badly enough. He hasn’t spared expense. He has put in about everything you could put into a cable.”

“Except why he wants me,” said Betty.

“Yes,” said Elsa. “Why does he want you? And in such a desperate hurry, too!”

Marvin was re-reading the message.

“It isn’t a mere invitation,” he said. “There’s no come-right-along-you’ll-like-this-place-it’s-fine about it. He seems to look on your company more as a necessity than a luxury. It’s a sort of imperious C.Q.D.”

“That’s what makes it so strange. We have hardly met for years. Why, he didn’t even know where I was. The cable was sent to the bank and forwarded on. And I don’t know where he is!”

“Which brings us back,” said Marvin, “to mysterious Mervo. Let us reason inductively. If you get to the place by taking a boat from Marseilles, it can’t be far from the French coast. I should say at a venture that Mervo is an island in the Mediterranean. And a small island for if it had been a big one we should have heard of it.”

“Marvin!” cried Elsa, her face beaming with proud affection. “How clever you are!”

“A mere gift,” he said modestly. “I have been like that from a boy.” He got up from his chair. “Isn’t there an encyclopaedia in the library, Elsa?”

“It will probably touch on Mervo. I’ll go and fetch it.”

As he crossed the terrace, Elsa turned quickly to Betty.

Betty smiled at her.

Elsa’s eyes danced. She drew in her breath softly. Betty looked at her in silence for a moment. The wistful expression was back on her face.