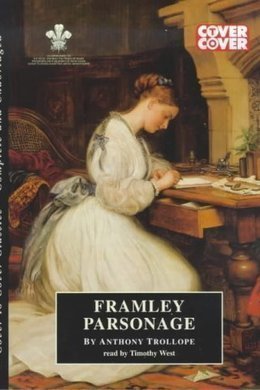 The fourth of the Barsetshire Chronicles, Framley Parsonage was published to wide acclaim and has always been one of Trollope’s most popular novels. In it the values of a Victorian clergyman Mark Robarts, are put to the test. Through a combination of naivety and social ambition, Robarts is compromised and brought to the brink of ruin. Trollope tells his story with great compassion, offsetting the drama with his customary humour. Like all the Barsetshire novels, it is an extraordinarily evocative picture of everyday life in nineteenth-century England.

When young Mark Robarts was leaving college, his father might well declare that all men began to say all good things to him, and to extol his fortune in that he had a son blessed with so excellent a disposition.

This father was a physician living at Exeter. He was a gentleman possessed of no private means, but enjoying a lucrative practice, which had enabled him to maintain and educate a family with all the advantages which money can give in this country. Mark was his eldest son and second child; and the first page or two of this narrative must be consumed in giving a catalogue of the good things which chance and conduct together had heaped upon this young man’s head.

His first step forward in life had arisen from his having been sent, while still very young, as a private pupil to the house of a clergyman, who was an old friend and intimate friend of his father’s. This clergyman had one other, and only one other, pupil–the young Lord Lufton; and between the two boys, there had sprung up a close alliance.

While they were both so placed, Lady Lufton had visited her son, and then invited young Robarts to pass his next holidays at Framley Court. This visit was made; and it ended in Mark going back to Exeter with a letter full of praise from the widowed peeress. She had been delighted, she said, in having such a companion for her son, and expressed a hope that the boys might remain together during the course of their education. Dr. Robarts was a man who thought much of the breath of peers and peeresses, and was by no means inclined to throw away any advantage which might arise to his child from such a friendship. When, therefore, the young lord was sent to Harrow, Mark Robarts went there also.

That the lord and his friend often quarrelled, and occasionally fought,–the fact even that for one period of three months they never spoke to each other–by no means interfered with the doctor’s hopes. Mark again and again stayed a fortnight at Framley Court, and Lady Lufton always wrote about him in the highest terms.

And then the lads went together to Oxford, and here Mark’s good fortune followed him, consisting rather in the highly respectable manner in which he lived, than in any wonderful career of collegiate success. His family was proud of him, and the doctor was always ready to talk of him to his patients; not because he was a prizeman, and had gotten medals and scholarships, but on account of the excellence of his general conduct. He lived with the best set–he incurred no debts–he was fond of society, but able to avoid low society–liked his glass of wine, but was never known to be drunk; and, above all things, was one of the most popular men in the university.

Then came the question of a profession for this young Hyperion, and on this subject, Dr. Robarts was invited himself to go over to Framley Court to discuss the matter with Lady Lufton. Dr. Robarts returned with a very strong conception that the Church was the profession best suited to his son.

Lady Lufton had not sent for Dr. Robarts all the way from Exeter for nothing. The living of Framley was in the gift of the Lufton family, and the next presentation would be in Lady Lufton’s hands, if it should fall vacant before the young lord was twenty-five years of age, and in the young lord’s hands if it should fall afterwards. But the mother and the heir consented to give a joint promise to Dr. Robarts. Now, as the present incumbent was over seventy, and as the living was worth £900 a year, there could be no doubt as to the eligibility of the clerical profession.