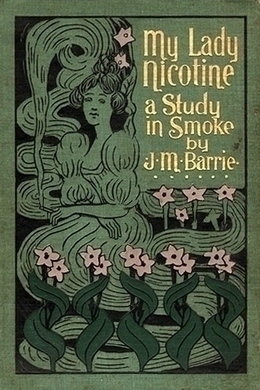 A Study in Smoke

An ode to the power of nicotine, by the Scottish novelist and dramatist, best known for inventing the character of Peter Pan. My Lady Nicotine is one of his earlier works. Focusing on his days as a smoker, J. M. Barrie takes us through his life as a smoker to his last pipe as he begins his non-smoking days. Barrie’s humorous essays about his companions, habits and quitting are sure to delight readers.

The circumstances in which I gave up smoking were these:

I was a mere bachelor, drifting toward what I now see to be a tragic middle age. I had become so accustomed to smoke issuing from my mouth that I felt incomplete without it; indeed, the time came when I could refrain from smoking if doing nothing else, but hardly during the hours of toil. To lay aside my pipe was to find myself soon afterward wandering restlessly round my table. No blind beggar was ever more abjectly led by his dog, or more loath to cut the string.

I am much better without tobacco, and already have a difficulty in sympathizing with the man I used to be. Even to call him up, as it were, and regard him without prejudice is a difficult task, for we forget the old selves on whom we have turned our backs, as we forget a street that has been reconstructed. Does the freed slave always shiver at the crack of a whip? I fancy not, for I recall but dimly, and without acute suffering, the horrors of my smoking days. There were nights when I awoke with a pain at my heart that made me hold my breath. I did not dare move. After perhaps ten minutes of dread, I would shift my position an inch at a time. Less frequently I felt this sting in the daytime, and believed I was dying while my friends were talking to me. I never mentioned these experiences to a human being; indeed, though a medical man was among my companions, I cunningly deceived him on the rare occasions when he questioned me about the amount of tobacco I was consuming weekly. Often in the dark I not only vowed to give up smoking, but wondered why I cared for it. Next morning I went straight from breakfast to my pipe, without the smallest struggle with myself. Latterly I knew, while resolving to break myself of the habit, that I would be better employed trying to sleep. I had elaborate ways of cheating myself, but it became disagreeable to me to know how many ounces of tobacco I was smoking weekly. Often I smoked cigarettes to reduce the number of my cigars.

On the other hand, if these sharp pains be excepted, I felt quite well. My appetite was as good as it is now, and I worked as cheerfully and certainly harder. To some slight extent, I believe, I experienced the same pains in my boyhood, before I smoked, and I am not an absolute stranger to them yet. They were most frequent in my smoking days, but I have no other reason for charging them to tobacco. Possibly a doctor who was himself a smoker would have pooh-poohed them. Nevertheless, I have lighted my pipe, and then, as I may say, hearkened for them. At the first intimation that they were coming I laid the pipe down and ceased to smoke–until they had passed.

I will not admit that, once sure it was doing me harm, I could not, unaided, have given up tobacco. But I was reluctant to make sure. I should like to say that I left off smoking because I considered it a mean form of slavery, to be condemned for moral as well as physical reasons; but though now I clearly see the folly of smoking, I was blind to it for some months after I had smoked my last pipe. I gave up my most delightful solace, as I regarded it, for no other reason than that the lady who was willing to fling herself away on me said that I must choose between it and her. This deferred our marriage for six months.

I have now come, as those who read will see, to look upon smoking with my wife’s eyes. My old bachelor friends complain because I do not allow smoking in the house, but I am always ready to explain my position, and I have not an atom of pity for them. If I cannot smoke here neither shall they. When I visit them in the old inn they take a poor revenge by blowing rings of smoke almost in my face. This ambition to blow rings is the most ignoble known to man. Once I was a member of a club for smokers, where we practised blowing rings. The most successful got a box of cigars as a prize at the end of the year. Those were days! Often I think wistfully of them. We met in a cozy room off the Strand. How well I can picture it still. Time-tables lying everywhere, with which we could light our pipes. Some smoked clays, but for the Arcadia Mixture give me a brier. My brier was the sweetest ever known. It is strange now to recall a time when a pipe seemed to be my best friend.