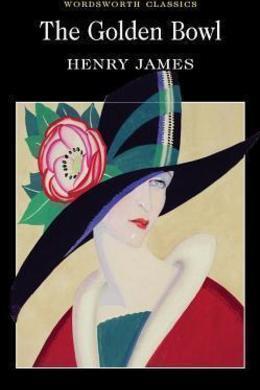 The Golden Bowl is an intense, involved study of marriage, adultery and family ties. The central characters are a man and his daughter and James delves into their consciousness to explore the complexity of their relationship to each other and their respective spouses. The novel is often considered the completion of the major phase of James’ career.

The Prince had always liked his London, when it had come to him; he was one of the modern Romans who find by the Thames a more convincing image of the truth of the ancient state than any they have left by the Tiber. Brought up on the legend of the City to which the world paid tribute, he recognised in the present London much more than in contemporary Rome the real dimensions of such a case. If it was a question of an Imperium, he said to himself, and if one wished, as a Roman, to recover a little the sense of that, the place to do so was on London Bridge, or even, on a fine afternoon in May, at Hyde Park Corner. It was not indeed to either of those places that these grounds of his predilection, after all sufficiently vague, had, at the moment we are concerned with him, guided his steps; he had strayed, simply enough, into Bond Street, where his imagination, working at comparatively short range, caused him now and then to stop before a window in which objects massive and lumpish, in silver and gold, in the forms to which precious stones contribute, or in leather, steel, brass, applied to a hundred uses and abuses, were as tumbled together as if, in the insolence of the Empire, they had been the loot of far-off victories. The young man’s movements, however, betrayed no consistency of attention–not even, for that matter, when one of his arrests had proceeded from possibilities in faces shaded, as they passed him on the pavement, by huge beribboned hats, or more delicately tinted still under the tense silk of parasols held at perverse angles in waiting victorias. And the Prince’s undirected thought was not a little symptomatic, since, though the turn of the season had come and the flush of the streets begun to fade, the possibilities of faces, on the August afternoon, were still one of the notes of the scene. He was too restless–that was the fact–for any concentration, and the last idea that would just now have occurred to him in any connection was the idea of pursuit.

He had been pursuing for six months as never in his life before, and what had actually unsteadied him, as we join him, was the sense of how he had been justified. Capture had crowned the pursuit–or success, as he would otherwise have put it, had rewarded virtue; whereby the consciousness of these things made him, for the hour, rather serious than gay. A sobriety that might have consorted with failure sat in his handsome face, constructively regular and grave, yet at the same time oddly and, as might be, functionally almost radiant, with its dark blue eyes, its dark brown moustache and its expression no more sharply “foreign” to an English view than to have caused it sometimes to be observed of him with a shallow felicity that he looked like a “refined” Irishman. What had happened was that shortly before, at three o’clock, his fate had practically been sealed, and that even when one pretended to no quarrel with it the moment had something of the grimness of a crunched key in the strongest lock that could be made. There was nothing to do as yet, further, but feel what one had done, and our personage felt it while he aimlessly wandered. It was already as if he were married, so definitely had the solicitors, at three o’clock, enabled the date to be fixed, and by so few days was that date now distant. He was to dine at half-past eight o’clock with the young lady on whose behalf, and on whose father’s, the London lawyers had reached an inspired harmony with his own man of business, poor Calderoni, fresh from Rome and now apparently in the wondrous situation of being “shown London,” before promptly leaving it again, by Mr. Verver himself, Mr. Verver whose easy way with his millions had taxed to such small purpose, in the arrangements, the principle of reciprocity. The reciprocity with which the Prince was during these minutes most struck was that of Calderoni’s bestowal of his company for a view of the lions. If there was one thing in the world the young man, at this juncture, clearly intended, it was to be much more decent as a son-in-law than lots of fellows he could think of had shown themselves in that character. He thought of these fellows, from whom he was so to differ, in English; he used, mentally, the English term to describe his difference, for, familiar with the tongue from his earliest years, so that no note of strangeness remained with him either for lip or for ear, he found it convenient, in life, for the greatest number of relations. He found it convenient, oddly, even for his relation with himself–though not unmindful that there might still, as time went on, be others, including a more intimate degree of that one, that would seek, possibly with violence, the larger or the finer issue–which was it?–of the vernacular.