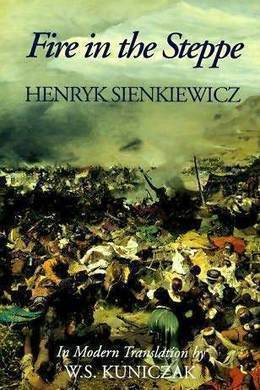 Fire in the Steppe

Pan Michael - An Historical Novel of Poland, the Ukraine, and Turkey

Close on the heels of the magnificent With Fire and Sword and The Deluge, comes this impassioned tale of love, war, heroism, treason and betrayal, with which the great classic Trilogy of Poland’s most popular 19th century writer is brought to an end. Fire in the Steppe is the final book of Sienkiewicz’s literary masterpiece which grips and enthralls just as powerfully today as it did when it was first published. It is an epic tale of love and adventure set in the savage wilderness of Poland’s eastern borderlands in the 17th century, and it is also the most realistic of Sienkiewicz’s novels. The Trilogy’s most memorable heroes, Pan Zagloba and Pan Volodyovski, are joined here by the unforgettable Basia, whose own adventures ring with strength, courage and determination against the bloody background of raids, border battles, and invasion by the awesome armies of the Turkish Empire in 1672. Told by a master storyteller, Fire in the Steppe concludes the stories of the Trilogy’s fabulous heroines and heroes who live, love and die in these pages of Poland’s most enduring epic.

After the close of the Hungarian war, when the marriage of Pan Andrei Kmita and Panna Aleksandra Billevich was celebrated, a cavalier, equally meritorious and famous in the Commonwealth, Pan Michael Volodyovski, colonel of the Lauda squadron, was to enter the bonds of marriage with Panna Anna Borzobogati Krasienski.

But notable hindrances rose, which delayed and put back the affair. The lady was a foster-daughter of Princess Griselda Vishnyevetski, without whose permission Panna Anna would in no wise consent to the wedding. Pan Michael was forced therefore to leave his affianced in Vodokty, by reason of the troubled times, and go alone to Zamost for the consent and the blessing of the princess.

But a favoring star did not guide him: he did not find the princess in Zamost; she had gone to the imperial court in Vienna for the education of her son. The persistent knight followed her even to Vienna, though that took much time. When he had arranged the affair there successfully, he turned homeward in confident hope.

He found troubled times at home: the army was forming a confederacy; in the Ukraine uprisings continued; at the eastern boundary the conflagration had not ceased. New forces were assembled to defend the frontiers even in some fashion. Before Pan Michael had reached Warsaw, he received a commission issued by the voevoda of Rus. Thinking that the country should be preferred at all times to private affairs, he relinquished his plan of immediate marriage and moved to the Ukraine. He campaigned in those regions some years, living in battles, in unspeakable hardships and labor, having barely a chance on occasions to send letters to the expectant lady.

Next he was envoy to the Crimea; then came the unfortunate civil war with Pan Lyubomirski, in which Volodyovski fought on the side of the king against that traitor and infamous man; then he went to the Ukraine a second time under Sobieski.

From these achievements the glory of his name increased in such manner that he was considered on all sides as the first soldier of the Commonwealth, but the years were passing for him in anxiety, sighs, and yearning. At last 1668 came, when he was sent at command of the castellan to rest; at the beginning of the year he went for the cherished lady, and taking her from Vodokty, they set out for Cracow.

They were journeying to Cracow, because Princess Griselda, who had returned from the dominions of the emperor, invited Pan Michael to have the marriage at that place, and offered herself to be mother to the bride.

The Kmitas remained at home, not thinking to receive early news from Pan Michael, and altogether intent on a new guest that was coming to Vodokty. Providence had till that time withheld from them children; now a change was impending, happy and in accordance with their wishes.

That year was surpassingly fruitful. Grain had given such a bountiful yield that the barns could not hold it, and the whole land, in the length and the breadth of it, was covered with stacks. In neighborhoods ravaged by war the young pine groves had grown in one spring more than in two years at other times. There was abundance of game and of mushrooms in the forests, as if the unusual fruitfulness of the earth had been extended to all things that lived on it. Hence the friends of Pan Michael drew happy omens for his marriage also, but the fates ordained otherwise.